Book Review: Rip it Up: The Specialty Records Story 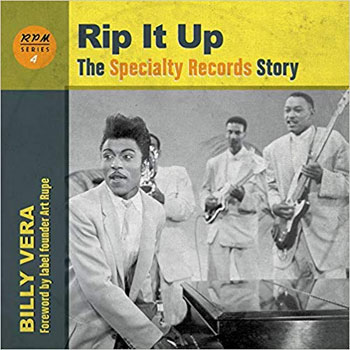 BMG Publishing launched a series of books, the RPM Series, a few years ago. Superficially similar in scope to the 33-1/3 series, these volumes are designed to chronicle the history of some of music’s most important record labels. Gillian Gaar’s World Domination: The Sub Pop Records Story is among the best, as it traces the Seattle label’s birth and development, drawing upon firsthand interviews with many key players involved.

Of course Gaar had the advantage of dealing with a relatively recent history; Billy Vera faced a significantly greater challenge in researching the story of Art Rupe’s Specialty Records. The label began operations in 1945, enjoying its heyday in the decades that would follow. It’s best known as the one-time home of Little Richard, though over the years its roster included many of the most significant names in r&b, soul and even lesser-known genres like zydeco.

But most of the artists who recorded for Specialty are long gone, or at least not in the position to sit for interviews. Happily, though, Rupe – who’s past his 100th birthday – did cooperate with Vera on the book, most significantly granting him access to a physical archive of written correspondence. And it’s those contracts and letters that provide a kind of connective tissue for Rip it Up: The Specialty Records Story. Throughout its pages, Vera draws upon those letters time and again, often to make or support a larger point.

Unlike Gillian Gaar’s book, Rip it Up isn’t so much a narrative history of a label. Instead, it’s really a lengthy catalog of brief biographical sketches. Quite a few artists cut sides for Rupe, and a significant number of them were not heard from again. These one-hit non-wonders didn’t leave behind a great deal of biographical documentation on themselves, so often Vera has only Rupe’s old letters to go by.

Books of this type all but require a soundtrack to accompany them; without the benefit of hearing the music, some of the information in the book simply blows by, as in the case where essentially nothing is known about an artist. But Vera expands on the biographies whenever he can, sometimes inserting himself into the story when it seems relevant.

Readers will undoubtedly come away from reading Rip it Up with a greater appreciation for Specialty’s important place in popular music history. But along the way, they may encounter a couple of stumbling blocks. First of all, Vera displays occasional flashes of unprovoked bitchiness. How else to explain the fact that halfway through the book – in a chapter titled “What is a Star?” – he takes a pot shot at a well-known artist.

The “What is a Star?” chapter is essentially a four-page essay designed as a set-up to introduce Little Richard into the story, and Vera does so well enough, reflecting on the sometimes ineffable qualities that make a star. But after name-checking Aretha Franklin, Bing Crosby and other artists of whom he clearly approves, he – out of the blue – shares his thoughts on Cher’s voice: “To my ears,” he writes, “it was painful, like listening to fingernails scraping on a blackboard.”

Cher didn’t record for Specialty (though Sonny Bono was a key figure there), and she isn’t mentioned again in Vera’s book. And the book’s index doesn’t list her. Essentially, Vera’s aside is a throwaway comment, but he saw fit to include it anyway, just – we can only assume – to let us know he’s no fan. As it happens, Vera has a history with Cher that may have influenced the aside. In his memoir Harlem to Hollywood, he wrote of an encounter: “…when one of our roadies told me Cher wanted to jam one night, I told him to ‘Please inform Miss Cher that the Beaters do not jam.’” OK, we get it. But such accounts – as when elsewhere in Rip it Up as he lets us know he’s also not enamored with Little Richard (the man, not the artist) – may leave readers scratching their heads, wondering if there perhaps isn’t, shall we say, more to the story.

Perhaps more troubling is a glaring factual inaccuracy, an unforced error. Oddly, Vera doesn’t seem to know his Beatles history. He recounts a tale of Little Richard “discovering” the group in Germany, but his version of the story has the event taking place in 1964, by which time the group had already appeared on the Ed Sullivan Show and become the biggest act on the planet (The Beatles’ time in Hamburg ended by 1962.) And to compound the error, Vera ends the book with an apologia about sources and claims needing to be “double and triple checked.” So much for that kind of quality control.

Yet as egregious as mistakes may be, ultimately they don’t negate the value that Rip it Up offers. Specialty Records’ history has heretofore gone undocumented – at least in book-length form – so any effort in that direction, especially one done with the cooperation (and, one assumes, blessing) of Art Rupe is to be welcomed.