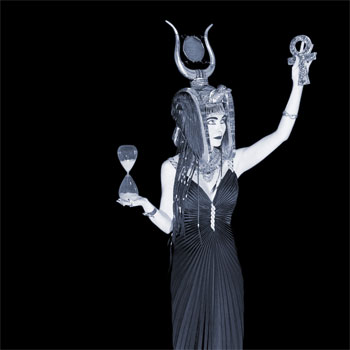 Cary Grace has carved out a fascinating niche in the world of music. Though she got her start in the Nashville singer-songwriter community (she even had Vince Gill play on one of her early albums!), her chosen musical idiom couldn’t be farther from all that. An American expat currently living in the UK, Grace has two parallel careers. She runs Wessex Analogue, a boutique maker of Wiard brand hand-built analog synthesizers. Relatedly, she records and tours under her own name, making original progressive rock. She has released a number of albums, and in recent years has participated in some impressive busman’s-holiday endeavors (like a splendid cover of Pink Floyd’s “Fat Old Sun,” released on very limited-edition lathe-cut vinyl) and contributing to a superb Fruits de Mer compilation, The Three Seasons.

But it’s her original music that remains the most compelling of all Grace’s endeavors. Her latest release is Lady of Turquoise. In keeping with her aesthetic of focusing on more than just the auido part, the album is beautifully packaged. But as ever, it’s really about the music. The sprawling, ambitious work extends across two CDs, and it’s perhaps Grace’s most fully realized collection to date. The first disc opens with the wonderfully languorous “Khepera at the Dawn,” and the influence of dreamy, laid-back space rock early-mid Pink Floyd is clearly in evidence. The tune bubbles along contemplatively – pretty much a one-chord affair – but it’s nonetheless warmly inviting and nicely textured.

But Grace isn’t merely a purveyor of space-rock; she’s a skilled tunesmith, as evidenced by moody, atmospheric tracks like “Letterbox.” Her strong voice and impressive range are on brilliant display, but her band rocks, too; as “Letterbox” unfolds, squalls of wah-wah guitar work their way into the mix, eventually taking it over.

Artists like Steven Wilson have taken exception to being labeled “progressive,” and one suspects that Grace might express similar sentiments. Though her music certainly has the scope and dimension of that rock subgenre, her foundation in song makes her work supremely accessible. Not to belabor the Floyd references, but in a real sense she’s about as prog as Waters-Gilmour-Mason-Wright. The vibe is there, but Grace’s work is as catchy and finely crafted as Steven Wilson’s (decidedly non-prog) To the Bone.

“Without a Trace” is a lovely ballad with crystalline piano, soaring guitar leads, and sublimely double-tracked Grace lead vocals. The trippy “Into Dust” suggests early Jefferson Airplane crossed with Massive Attack, plus a dose of Hawkwind. Fans of space rock will luxuriate in the largely spoken-word “Afterglow.” Ian East’s wonderful saxophone work on “Film Noir” is a thing of beauty; it enhances an already superb tune. And the first disc concludes with an extended work, the windswept, world-vibe “Costume Jewellery.” The track effectively combines all of Grace’s musical assets – plus some fantastic musicianship by her associates – into a well-rounded tune that doesn’t waste a second of its twelve-plus minutes. Subtly redolent of some of The Church’s more exploratory works, it’s perhaps the best track on a uniformly enjoyable discs.

Had she deigned to stop there, Cray Grace could have been satisfied, having created an excellent album of standard length. But perhaps the time spent on side projects resulted in a backlog of top-shelf original material. Regardless, the second disc of Lady of Turquoise offers up more impressive sonic goodies.

“Moonflowers (Fade to Black” finds Grace’s vocals coexisting peacefully with what’s essentially a seven-minute John Garden guitar solo. The song’s glacial pace and Nick Mason-styled drum fills (courtesy of David Payne) provide the perfect backdrop for Grace’s steely yet gentle vocal, itself calling to mind Julie Driscoll (though I can’t put my finger on what about it reminds me of the latter). “Sacrifice” is – and this is meant in the best way possible – a radio ready track, with a strong melody, sultry vocal and solid beat. It heads pleasingly into the stratosphere multiple times across its ten-plus minutes, but Grace always brings things back to Earth.

The moody, melancholy “Memory” slows the pace down a bit, though the track eventually unfolds to reveal a majestic arrangement before settling back into its quiet vibe. “Castle of Dreams” is a churning, swirling psychedelic number that suggests Steve Hillage. The brief “The Land of Two Fields” is a pastoral piece that nonetheless make excellent use of analog synths ; in fact it’s one of few “synthy” moments on Lady of Turquoise, underscoring that fact that Grace views the synthesizer as merely one in a very extensive collection of musical tools.

The double album concludes with its title track, an assured rocker that – like “Costume Jewellery” that closes the first disc – tidily combines all of Cary Grace’s strengths and sets them on display. One suspects that this music is even more transcendent and emotionally resonant live onstage. For that, only UK and European audiences are likely to enjoy that privilege. But for the rest of us, the 2CD Lady of Turquoise is much more than a consolation prize.

You may also enjoy my Cary Grace feature/interview, originally published in PROG Magazine.