It’s a Nice Day for a Weird Wedding: Fleetwood’s

Fifth in a five-part series

The genesis of Fleetwood’s came from a simple, practical goal. “I have a lot of friends in the music industry,” says co-owner Mary Kelley. “And I wanted to have a place for them to come and play.” She teamed up with the owners of Eldorado Antiques, the architectural salvage business next door, and riffing on their love of all things Cadillac, opened a place called Fleetwood’s in August 2017.

But Fleetwood’s would be different. “Asheville has a $30 million wedding industry,” Kelley says, “But no quickie wedding chapel. So, here we are.” The bar – which is also an ephemera shop with used vinyl and vintage clothing – offers a $99 weekday wedding package for “people who don’t want to fool with anything, but want to get married,” she says.

And for those on the fence, Fleetwood’s offers something for them as well. “We have a ‘Married for the Weekend’ package,” Kelley says with a wry smile. “It’s a fake ceremony. But you get a certificate.” Riffing on an ad slogan used by another city known for its wedding industry, she quips, “What happens in West Asheville, stays in West Asheville … at least until Sunday.”

The real wedding business has been picking up at Fleetwood’s, though. Kelley and her co-owners Simon and Christi Whiteley are all ordained ministers in the Universal Life Church. “You have to have your actual license from the courthouse,” she says, “but we will do the rest for you. We’ve had some really beautiful and unique weddings here; we’ve done about 30 or 40.”

Weddings at Fleetwood’s take on the character of the participants, but a common thread is that they’re somewhat unconventional. “It’s for people who find the space unique, want something different, want something very simple, don’t want the government involved, or whatever,” Kelley says. “People have their reasons.”

She recalls a recent ceremony, one of her favorites. “A couple that had been together [unmarried] for 20 years just decided, ‘Now’s the time. We were looking and saw this place online; this is <i>us</i>,’” Kelley says that the pair was pretty straight-looking, “but they felt that they were quirky. And this is their quirky spot.”

Other memorable weddings at Fleetwood’s include one last Halloween, with the couple dressed as the Frankenstein monster and Bride of Frankenstein. “It was a lesbian shotgun wedding,” Kelley deadpans. “One of them was very pregnant.” 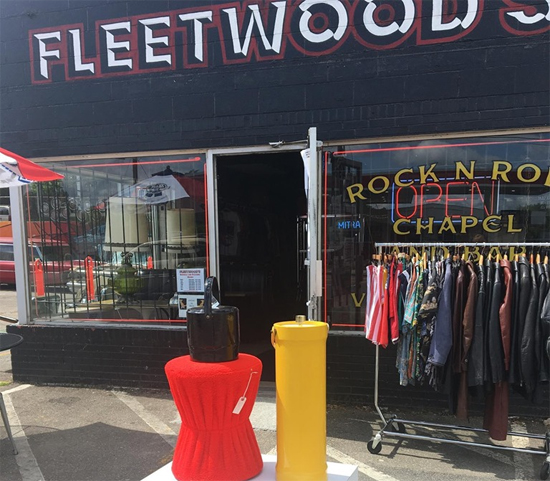 But even with the growing wedding business, at its core Fleetwood’s is a bar. There’s a room in the back that’s used for live music shows. There’s no stage and no house sound system, but that’s all in keeping with the garage rock aesthetic that defines the bar’s musical character.

Kelley is a Memphis transplant; she also lived in New York City for many years; those experiences led to her developing friendships with musicians from all over. “I grew up hanging out with cool people or doing cool stuff,” Kelley says. Those connections mean that it’s not uncommon for old friends to ring her up and ask if their band can schedule a gig at her little Haywood Road bar, mere steps from the I-240 exit.

“I do all the booking,” Kelley says. “If there’s a band that wants to come in, I’m checking them out, vetting them, feeling if they’re right for us. We kind of stick towards punk rock, garage rock.” She makes a decided effort to pair touring acts with local bands. “Putting bands together to make a cohesive bill has been my strongest thing so far. Because people say, ‘No matter what’s playing, even if it’s something I’ve never heard of, there’s never been a bad band that played there once.’ That’s a big thing.”

In May, Japanese garage rock trio Guitar Wolf was on a U.S. tour with Nashville Pussy and the Turbo AC’s. The tour took the popular bands to major markets: Brooklyn, Philadelphia, Atlanta, Milwaukee and other major cities. But between tour dates, Guitar Wolf added Fleetwood’s to its list of concert dates.

“Any other place, the guarantee would be at least three, four thousand dollars,” Kelley says. “But we got them for, like, $200 and some fried chicken, because they’re friends. And now they’re like, ‘Anytime we’re coming to the United States, we’re playing at Fleetwood’s.’

“We’ve had so many shows and they’ve all been cool in their own way,” Kelley says. And sometimes, Fleetwood’s wedding chapel identity combines seamlessly with its status as a rock ‘n’ roll venue. National touring act Scott Yoder played there recently with his band, and the audience included a trans couple. “The woman was dressed like a man, and the man was dressed like a woman,” Kelley says. “And they wanted to get fake-married. So Scott Yoder ‘officiated’ while guitarist Fiona Moonchild – a trans woman – played the Wedding March on guitar.”

Things went slightly off the rails, though. “Because it was Halloween, they wanted a fog machine,” Kelley says. “When they were walking down the aisle, the alarm went off. Suddenly everybody was rushing around in the fog, and we were all dressed ridiculously. My partners were dressed like bloody butchers.” No one was hurt, and there were laughs all around.

Fleetwood’s books non-musical, non-wedding events, too. An ACLU benefit was scheduled for August, set to include a dog kissing booth and belly dance performances. An all-femme comedy showcase is a fixture of the bar’s schedule, and Fleetwood’s hosted last year’s Pansy Fest. “The wrestling was really fun,” Kelley says. “They dressed as characters and wrestled in grits for charity. It was pretty amazing.” That event took place outside; Fleetwood’s features and outdoor patio; in keeping with the car-theme, a bar is in the process of being fashioned out of an old automobile grille.

During the day, people wander into Fleetwood’s to explore the crates of vintage records, find interesting clothing from years past, or grab a cold beer. “We do beer, wine and champagne cocktails,” Kelley says. By design, the bar doesn’t have a liquor license, so there are no spirits for sale. “We don’t want to be a private club,” Kelley says, “because we do get a lot of our income from people coming in during the day to shop.” Sometimes there’s a food truck parked outside, but it’s not a regular fixture. “There’s so much to eat right around here already,” Kelley says.

She readily concedes that Fleetwood’s is known – and positioned – as a place for locals. The nearby Burton Street community provides the bar with many of its regulars. “This is our weird little spot in West Asheville,” Kelley says. “It’s everything that we’ve loved wrapped into one business. We’re very open to the community, and the community’s open to us. And I think that is the ultimate spirit of what’s going on here: creating something that you love, and sharing it with your community.”