Blu-ray Review: Echo in the Canyon 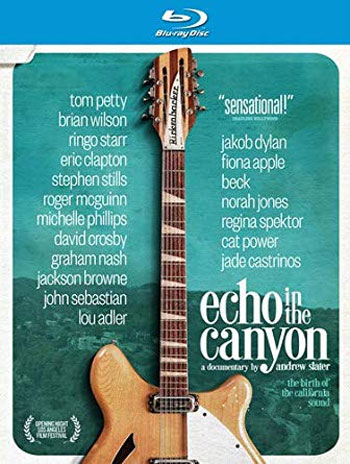 The creatively fertile and incalculably influential Laurel Canyon scene if the middle 1960s is explored in Echo In the Canyon. It’s not quite a documentary in the sense that it concerns itself nearly as much with current artists in the studio and onstage as it does with the moves and shakers of five decades ago. Jakob Dylan is the film’s center of gravity; his discussion with fellow musicians and his studio sessions, rehearsals and concert performances are the ingredients that hold the narrative together.

Jakob Dylan is an interesting presence. He largely seems warm and friendly with his interview subjects, though occasionally he comes off as uncomfortable and ill at ease. Now and then his facial reactions to some of the comments from his fellow musicians don’t seem to match up with what’s being said. And while he’s far more animated than his famous father, his deadpan humor often wins the day. When one person comments about “Dylan,” Jakob responds, “You’ll have to be more specific.”

Dylan seems most in his element when he’s onstage. He seems to exude a reassuring confidence that brings out the best from his fellow players. The core band is absolutely top-notch; though he only gets a flash of front-and-center screen time, guitarist Fernando Perdomo is a key to the cohesiveness of the band.

The hook upon which the entire film is hung is the current-day live performance, a sort of tribute concert. Some of the artists come off well – most, in fact, but a few seem oddly miscast. Cat Power appears only briefly onstage. Fiona Apple’s talents don’t seem to mesh well with the material. But Regina Spektor is transcendent, Beck fares far better than expected, and (though she’s seen and heard all too briefly) Norah Jones does a fine job. And the one artist with whom I was completely unfamiliar, Jade Castrinos (formerly of Edward Sharpe and the Magnetic Zeros), is nothing short of superb.

There are some odd quirks about the way the film is constructed. David Crosby, Stephen Still and Graham Nash each get significant screen time to offer their thoughts on the whole Laurel Canyon scene; appropriately enough, Crosby gets the largest share. Neil Young is mentioned often, and appears in archival footage and photos. But he’s not interviewed for the film. Instead, he show up bizarrely as the credits roll.

With any project such as this, is all too easy to focus on what was left out. Echo in the Canyon concerns itself largely with four groups: the Beach Boys, the Byrds, Buffalo Springfield and the Mamas and the Papas. A viewer with only a cursory knowledge of the L.A. music scene of the ’60s might come away with the impression that only those acts were part of the Laurel Canyon scene Not true: The Doors, the Monkees and quite a few others played a significant role; they get scant mention in the film.

Writer/director Andrew Slater deserves praise for the pacing and tone of the film overall; it’s well constructed, and though it takes some time to establish its rhythm, once the film gets into its groove it’s smooth sailing. And it’s worth pointing out that Slater is to be commended for managing to make a music documentary without Bono or Dave Grohl.