A Session with the Session Man: Rick Wakeman (Part Two) 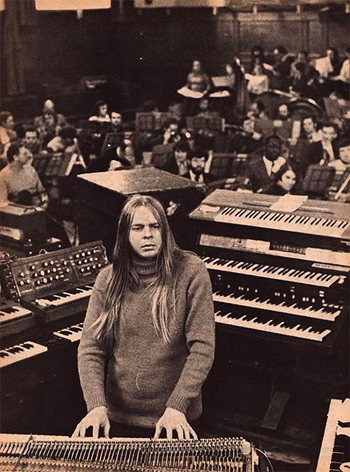 Of all the sessions you’ve played on, is there one that really stands out as a particularly disastrous or unpleasant?

No. I’ve never had any unpleasant sessions, because you’re there to make the music and play the music. Every one had sort of attributes. Going back to very enjoyable ones. I absolutely loved working with Ozzy [Osbourne] on his Ozzmosis album; that was tremendous. We did that over in New York. Ozzy invited me over to do the album and that was fantastic. Ozzy is much cleverer than a lot of people give him credit for, and his production ideas on Ozzmosis album were tremendous. With Ozzmosis, he produced what quite literally was a prog metal album. I mean, there’s tracks on there like “Perry Mason” that could easily be on a prog metal album. He’s a bright boy, Ozzy. He’s one of my dearest friends, and that was a pleasure to work on.

Lou Reed was interesting to work on in England; he had an interesting way of working. But everybody had their own little quirks. To be honest, a lot of sessions were a quick in and out. You arrive at 10:00, they throw the music in front of you, you play it, you leave at 1:00 and go over to the next lot from 2:00 until 5:00.

Nowadays – and it seems to happen a lot in prog because of file sharing – an artist sort of phones their part in. And you’ve done at least some of those.

Yeah, I’ve had stuff sent to me and I work on it in my studio with my engineer. Then we send it back. It works, but you can’t beat all being in the same room. That’s when things change; that’s when ideas float around. It works, because that’s when someone can say, “Hey, you’re doing that. I might change what I’m doing to this.” And then, that might spread around [to inspire the other musicians].

Keith Emerson once told me his story of his only recorded vocal session. Have you ever done vocals on a recording?

Yeah, I have. In fact, my only vocal was a hit single; it was top 30 in the UK. It was called “I’m So Straight I’m a Weirdo.” It was on an album; Rock and Roll Prophet, it was called. There was a video made; you’ll see it in YouTube.

I was living in Switzerland at the time – 1979, 1980 – and the singer wasn’t around. The engineer Dave Richards said, “Well, look just put a demo vocal down.” So, I put the vocals down and then we got a Swiss guy to come in and sing it eventually. But then Dave said to me one day, he said, “I don’t know how to tell you this, but I prefer what you do as your vocals to what the Swiss guy has done.” So, I went, “Okay. I don’t mind.” So, we left them on, and to my amazement, “I’m So Straight I’m a Weirdo” was a big radio hit in the UK and got to number 27 or something in the chart. It was only ever released in the UK, but it was great fun.

But I don’t like singing. I’ll be brutally honest: I don’t even sing in the shower! I have sung in the shower and got straight out; I dislike it that much. It’s really funny; even when there’s a whole group of people singing, I sort of mutter. I’m sort of strange. In the same way that I like to hear instruments played properly by good musicians, I like to hear vocals sung by people who really do have an individual vocal talent.

You were doing session work at age 20. And that’s been 50 years now…

Well, actually, my first sessions were in 1966. I did my first session when I was 17; that’s when I started. And so, I was doing them while I was at the college. My grant to go to college was so poor. I needed the money, but I needed the money to support both buying my books and getting me through college … and also my rather large appetite for beer at the local pub.

Back in those days, to the extent that you thought about it, what did you think you’d be doing at age 70?

That’s a really good question. Because I can remember sitting with Chris [Squire] and Alan [White] in the late ’70s: “Crikey, we’re coming up on our 30s! What are we gonna be doing when we’re 40?” And then, when we got in the 40s, “What are we gonna do when we’re 50?” Because there was no one to look at.

This is what happened. There was no sort of lot of aging rock stars going, “Oh, that’s what happens.” I mean, we’ve made it easier for a lot of the young bands, because they know that you can survive when you’re 60 and 70.