Unmarked Exit: Led Zeppelin’s ‘In Through the Out Door’ at 40 (Part One) 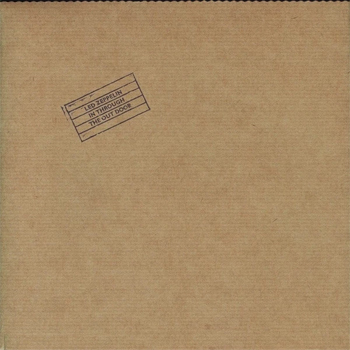 Led Zeppelin’s seventh studio album, Presence, was released at the end of March 1976. In contrast with the near-unanimous critical acclaim that greeted the band’s previous release, 1975’s double-LP Physical Graffiti, Presence received a relatively tepid reception. The keyboard experimentation that the band had employed so successfully on the previous few albums was absent, and while Zeppelin had never been a singles-oriented outfit, Presence somehow seemed less radio-friendly as well. Everything about the album seemed rushed; even the enigmatic artwork came off as a poor man’s Hipgnosis, the kind of thing Pink Floyd might have considered and then rejected. (As it happens, though, the cover art really was a Hipgnosis project!)

In the wake of multiple personal issues – vocalist Robert Plant’s car crash and (allegedly, at least) guitarist Jimmy Page’s serious drug use, there would be no tour in support of Presence. In fact the four members – Page, Plant, drummer John Bonham and bassist/multi-instrumentalist John Paul Jones – essentially went to ground after (or perhaps even before) the album’s release. The group did tour in ’77, but the death of Plant’s son meant that the tour was cut short. It wasn’t clear that Led Zeppelin would continue.

But they did. Nearly three and a half years after the release of Presence, the band returned with In Through the Out Door. A varied release, the August 1979 album was remarkable: it was both musically adventurous – in some ways, more of a piece with Houses of the Holy from 1973 – and perhaps the most unabashedly commercial collection of songs the band had ever put together. Maybe musical fashions had caught up with the band; whatever the reasons, In Through the Out Door was both well-received in the marketplace and praised in comparison to its predecessor.

The album opens to foreboding, vaguely Middle Eastern tones, sonic textures that suggest a churning cauldron. After more than 50 seconds of those atmospherics, Plant’s voice – altered with an electronic effect – introduces the song’s title: “In the Evening.” The rest of the band comes stomping in. Page plays a hypnotic guitar figure, and Jones doubles that line on synthesizer. In fact, the synth is mixed quite a bit louder; the guitar is – by Zeppelin standards – buried in the mix. Bonham lays down a simple yet thundering drum pattern that swings, just a little. On the first chorus, Plant seems to be struggling just a bit for the high notes; he’s the tiniest bit flat. But rather than sounding jarring, the effect is humanizing: maybe these guys are mere mortals, after all. The arrangement is among the most repetitive thing the band would ever commit to tape, but it’s appealing nonetheless. Page’s solo – some four minutes in – is on the sloppy side, but his skill at conjuring interesting tones remains unparalleled. The dreamy bridge of the song is its best quality; here, Page’s lead guitar is the sonic equivalent of a searchlight in thick fog. Still, at nearly seven minutes, “In the Evening” threatens to wear out its welcome; a memorable riff repeated hundreds of times doesn’t itself make for a great song.

“South Bound Saurez” seems expressly designed to give keyboardist Jones a case of carpal tunnel syndrome; his insistent, sixteen-to-the-bar piano pounding is among the most prominent characteristics of this bluesy tune. With a title that possibly features a misspelling (the place name “Suarez” seems more likely), the tune hearkens in some ways back to “Rock and Roll” from the band’s fourth, untitled LP. There’s nothing wrong with the tune, but it’s a relatively undistinguished entry in the Led Zeppelin catalog. Bonham’s drum breakdowns are as impressive as ever, and when John Paul Jones breaks out of the repetitive piano parts into some bluesy runs, he shines. 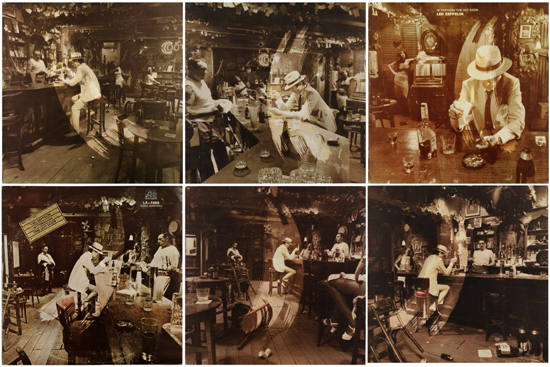 Three tracks in, though, the bands hits its stride. “Fool in the Rain” would be an extremely popular FM radio hit, and for good reason. It’s full of Led Zeppelin’s best qualities: the beat is constantly shifting, with the instrumental melodies playing against Plant’s vocal line. The song’s arrangement leaves plenty of space for inventive guitar runs from Page and wonderfully splashy and expressive percussion work from John Bonham. Moreover, the band seems to be having a really good time. After a whistle blows, the song heads in a completely different direction, one filled with marimbas; it’s as close to a party song as the band would ever make. And when Jimmy Page lays down a call-and-response solo – sparring with Bonham – his wonderfully buzzing, distorted lead is a treat. It’s difficult to tell if he’s using an octave divider to double the lead melody an octave lower; perhaps it’s Jones playing along on overdubbed bass. Maybe it’s both; whatever it is, the instrumental break is a highlight of the entire record. Like “In the Evening” before it, “Fool in the Rain” makes a virtue of repetition, using that hypnotic over-and-over as a basis upon which musical exploration can be laid.

If they were having a good time cutting “Fool in the Rain,” the band is positively giddy on “Hot Dog.” Over the years, this tune has often got a bad rap from Led Zeppelin fans who consider it a throwaway romp. And while it is a romp, the tune has virtues of its own. With a sound that draws from all over the American musical landscape, “Hot Dog” distills the influences of Elvis, country and western and steely hard rock into something that – if not new – is nonetheless a great deal of fun. It’s not difficult to imagine American country guitarist Junior Brown – who would have been around 27 when In Through the Out Door was released – hearing “Hot Dog” and deciding that its mix of country music values and high-energy guitar riffage might be a direction worth exploring. John Paul Jones is showcased here, with wonderful barrelhouse piano and a stomping bass line. Bonham plays things straight, though his impossibly hard-hitting approach to the drums adds heft. Plant is clearly enjoying harmonizing with himself. And humor – a characteristic that doesn’t manifest itself in a lot of Led Zeppelin’s material – crops up in “Hot Dog.” The couplet “I took her love at seventeen / a little late these days, it seems” is more than a bit on-the-nose in light of Page’s frequent dalliances with, let’s just say, younger ladies. Guitar-wise, Page is simply on fire; he fumbles over some of the speedy lead runs on his guitar, but those mistakes only add to the song’s charm.

To be continued with a look at Side Two…