In a world increasingly defined by fractiousness and divisiveness, the music and world view of Western North Carolina multi-instrumentalist Andrew Reed is a welcome restorative. Though Reed — who’s been releasing albums since the 1980s — works in a variety of styles including progressive rock, his most recent solo album, If All the World Were Right, has more in common with breezy, tuneful and acoustic-leaning FM radio pop of the 1970s. That style is well suited for the upbeat, positive (but not preachy) messages found in his lyrics.

“Most of my work tends to be in a major chord,” he says, speaking both metaphorically and literally. “I believe the only logical way to go is positive, because being critical and negative doesn’t tend to move the world forward.” But Reed emphasizes that his perspective isn’t one of a dewy-eyed dreamer. “I’m not so naive to think that it’s all golden sunsets and daisies every place,” he says.

Yet like a good, introspective lyricist, Reed does wax philosophical. “You have to go through this world of dense matter,” he says. “And that’s just part of the journey.” He believes that while we can’t always change our circumstances, we can choose how we experience them. “Often, that’s really the only alternative we have,” he says. 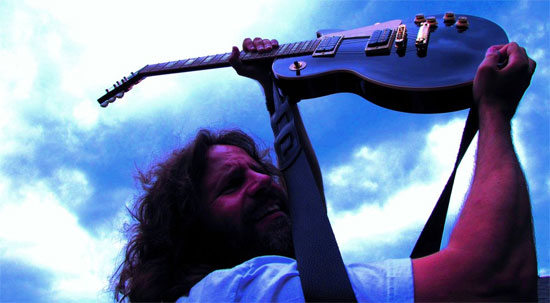 On first exposure, many listeners might not even realize that If All the World Were Right is a conceptual work. “Almost every album I put out tends to be a concept record of sorts, with some unifying themes,” Reed says. He readily admits that the idea of a concept album in 2018 “completely flies in the face of modern convention.” But he follows the muse where it leads him.

Reed outlines the record’s unifying theme as one built around a prodigal character (“not that there’s any religions reference,” he notes) who went out and sowed his oats in the world and was initially defeated. “There’s only one ‘boy-girl relationship’ song on the entire record,” he says with a chuckle. But If All the World Were Right is tuneful and accessible enough to please even those who don’t pay close attention to lyrics.

The central idea for Reed’s latest album wasn’t something he labored over. “When I was growing up, people thought I was slow and stupid. And in my teens they thought I was on drugs,” he says. “There’s always a lot of challenge when you’re just a little bit of that oddball, but the truth is that my music comes out of what I guess you’d call these high vibrational states.” He elaborates, describing an experience halfway between wakefulness and sleep. “When I can keep myself in that in-between place,” he says, “most of my music comes from there.”

The tricky part, he says, is capturing those ideas. “Because when you come out of that state, they vanish. They’re just fragile things, so I have to have either have a recorder or something to write on nearby,” he says. And after the musical and lyrical ideas have been harnessed, it’s time to commit them to the recorded medium. “Then it’s about being a good producer, choosing what works and doesn’t works, and bringing in the best musicians I can get my hands on,” says Reed.

While Reed has definite and specific ideas about how his music should sound, when he’s in the studio, he encourages his session musicians to bring their own creativity to bear on the music. “Getting beyond static and very rigid thinking is where creativity and great things happen,” he says.

Since its release, If All the World Were Right has been earning positive critical notices and significant chart action for an indie release. So at present Andrew Reed is placing his focus on supporting the new album. But that doesn’t mean he’s not already thinking about his next project. “The next album will take a little bit of another direction,” he hints. “But it still comes out of that same ‘stuff,’” he says. “Because I don’t know if it’s good to fight against what comes out of that state.”