Home  »  blues • interview • new release   »   Shemekia Copeland: Not Like Everybody Else 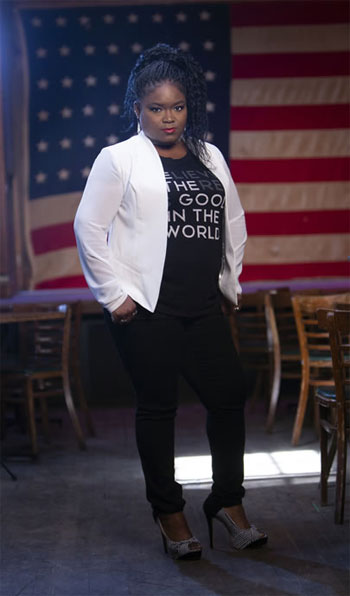 The singing daughter of blues guitarist Johnny Copeland, Shemekia Copeland is a Blues Music Award winner and critics’ favorite. On America’s Child, her 10th album, Copeland delivers a set of heartfelt songs, many built around themes of racial prejudice, xenophobia and greed. Songs like “Ain’t Got Time for Hate” are message-driven, but the music is still the deep-groove blues that earned her fame.

You’re thought of as a blues artist, but as the new album really makes plain, one genre seems like it’s too small to contain your musical vision. Do the other styles that inform your music — Americana, county, rock — come naturally to you, or are you consciously trying to expand your musical reach beyond the blues?

It’s a little bit of both. I mean, ever since the beginning of my career, I’ve loved blues music so much. I’ve always wanted it to evolve and grow, and I’ve always been able to see the potential. My whole goal was to bend it, not break it. And the way to do it, I always felt, was by adding elements of different styles of music, basically taking it back. Everybody else borrowed from blues. So why can’t I borrow from everyone else?

Tell me about the underlying message of America’s Child.

We wanted everyone to we’re all immigrants. So, we just kind of wanted to make a big statement that we’re all the same and we should act like it. We’re Americans, damn it, and we need to be proud and happy about that and love one another. I keep telling everybody I feel like a beauty queen who just won the Miss America contest because all I want is world peace. It’s like shouting it to the rooftops. All this hate makes me so sad, so sad.

It’s like the have and have nots: the rich and poor thing. Forget it! It’s so terrible. People keep talking about the government and politics and Democrats and Republicans, saying, “It’s all about money.” Nobody’s gonna do anything to change anything as long as our economy is good. They all have their hands in oil and big pharma, everything that runs this country. That’s why our medicine costs so much money. They don’t want universal healthcare. They don’t want anything like that that works everywhere else.

Yeah: “We’re good. We’re good. We don’t need anything.” But to just not care about other people and only care about yourself, it just irks me. One of Trump’s sprouts said that if poor people want more, they just need to work harder.

That’s the whole “born on a third base” perspective.

There is absolutely nothing wrong with being born with privilege, but my thing is, know it. Know that you were born with privilege and know that you were afforded opportunities that other people don’t get. At least don’t be ignorant to it and make stupid comments like that. And don’t tell me about your father and your grandfather and your great grandfather.

Let me tell you something. If I stole a bunch of land from people and then got hundreds of years of free labor, I’d be a billionaire too. I’d be a big ol’ billionaire! Hell yeah.

What sort of feedback have you received from ordinary people about the record?

I think I make people a little nervous sometimes! But I get great feedback; the people who get it really get it. And it makes me very happy. When I do songs like “Would You Take My Blood” – which is my very direct way of talking about race in this country, something I’ve never done that before – I really love the feedback I’m getting from that.

We’re all hardworking artists. And we get our reward by being able to do what we do. And having the voice to say the things that are important to me, I realize how important that is. Especially here as I get older, and when I as I became a mother, having a voice is very important to me. I get so tired of bullies on social media who go on and say [something like], “You’re a guitar player. So just play the guitar. You don’t get to talk about this or that.”

And it pisses me off because my thing is is that artists pay taxes, artists live here. I think what upsets people is that you have a voice, you have a big voice and people are listening to you. If I have an outlet that you don’t have, that’s not my fault. If I’m at the Oscars and I can speak my mind and say whatever I want; don’t hate on me. My hard work got me to the Oscars so that I could say what I wanna say and do what I wanna do. And that’s my prerogative.

This is something I should probably never say, but as a blues singer, singing about issues and doing what I’m doing right now, I’m not sure how I fit in. 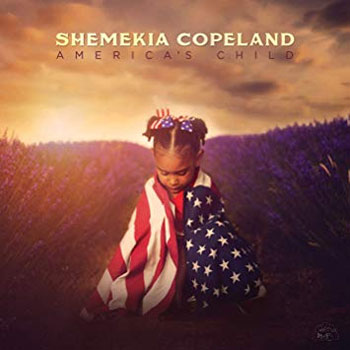 You started your recording career with Alligator Records, and now you’ve returned to them. I just read Bruce Iglauer’s memoir Bitten by the Blues. I think that he and the label have been one of the most important forces in helping to keep the blues alive. Tell me what the label means to you.

It’s a family. Bruce and his staff, they work so hard. Since the beginning of my career, over 20 years ago now, you’re talking about still the same people. They care about the music, they care about the artists, and it’s a wonderful place to be.

Way back when, you toured with your father. How did his life as a musician influence your own musical path?

And hard work: He would give 250% on stage. Even when he was sick and didn’t have [much] to give, he would go out there and give his absolute all. And I watched him do that.

I had great upbringing; I had great parents. And I’m so grateful for that, because in these days you have to have a solid foundation in this world. If you don’t have that, you’re just not gonna survive. My mother is a total badass! She and my father gave my brother and me the tools that we needed to survive in this world.

You’ve received quite a number of awards and nominations as well. What effect, if any, do those have on you and your career?

Getting an award for doing something that you love to do is a wonderful thing; it’s like the icing on the top. But I don’t let it define me, because if you don’t get that award, you don’t want to feel inferior or “less than.” So any time I get a nomination or an award, I’m truly grateful for it. But if I don’t get nominated and I don’t get the award, I don’t feel any kind of way about it either. It’s like what my daddy always told me: “Don’t read the press. If it’s good, you become cocky and arrogant. And if it’s bad, you become bitter and angry.”