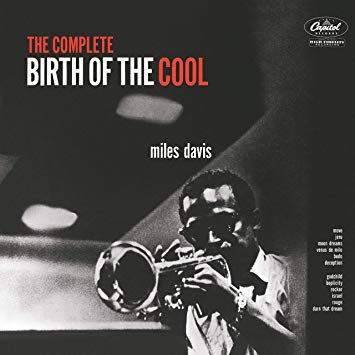 I’m not afraid to say it: I know my rock. Especially if it’s prog, psych or powerpop, I feel quite confident sharing my informed opinions on the music. To a lesser extent, that’s true when it comes to soul and blues; my knowledge of the forms doesn’t approach scholarship, but I’ve heard a lot and know what’s good and what isn’t.

In the matter of jazz, I’m on somewhat less solid footing. I certainly know what I like, and my knowledge grows deeper every day. But – though I have written liner notes for a half dozen jazz albums – I’m not an expert. So while I am thrilled beyond description to report that I have a copy of the new 2LP set The Complete Birth of the Cool, I would never presume to review the album for my readers. Instead, I’ll just tell you about it. If you’ve read this far, you need it.

The original Birth of the Cool was released way back in 1957; it was a compilation put together from three sessions Miles Davis led in 1949 and 1950. Its importance in the jazz idiom cannot be overstated. It’s nigh upon impossible to imagine a great deal of what came after in the jazz world without giving credit to these sessions.

But that LP didn’t include all of the recordings from those sessions. A 1998 CD did that, bringing together live and studio sessions, and even some tracks that featured vocals (by Kenny Haygood). As with many other CD-era releases – Duke Ellington’s 1999 Ellington at Newport (Complete) comes immediately to mind – this release was an attempt to place all of the extant material into its rightful place in history. And it was very well done.

But here we are more than two decades after that CD release, and some 70 years since the earliest sessions that made up that release. A segment of the listening public has – depending on one’s perspective – either wised up, gone all fetishist or bided our time. Either way, we like our vinyl.

The Complete Birth of the Cool is now available as a 2LP set, in a beautiful gatefold sleeve that includes a substantial booklet that’s impressive both in its words and its images. To my mind there’s no such thing as a coffee-table album, but if there were, this would be it. Ashley Kahn’s liner notes provide context for modern-day listeners, and the stunning photographic reproductions are jaw-dropping in their intensity. But at the end of the day, it’s about the music.

If you”re at all into jazz, and if you own a turntable, you should have bought this already. If you haven’t, go do so right away. You will not be disappointed.

That’s all I have to say on the subject.