Food and photos
Over the years, the Grey Eagle has also been home to some quality food options. Whitworth, manager John A. Zara and current owners Russ and Sarah Keith all reminisce warmly about the various eateries that have had runs at the venue. They mention Yo Mama’s Snackeria, Sassafras Cafe, Thibadeaux Jones, Twin Cousins, Roots and Taqueria Con Cuida. That last-named formed “the foundation of what we have now, the Grey Eagle Taqueria,” says Whitworth.

Anyone who has visited the Grey Eagle has been struck by the gallery of photographs adorning its walls. Sandlin Gaither started out the same way as had Whitworth. In fact when he moved to Asheville from Chareston – the two had been house mates there – he initially crashed on Whitworth’s couch. “And I started bugging Tyler,” Whitworth says. “’There’s this great guy in town – he’s on my couch right now – and he’d love to do something here.” Gaither initially worked the door before moving behind the bar. 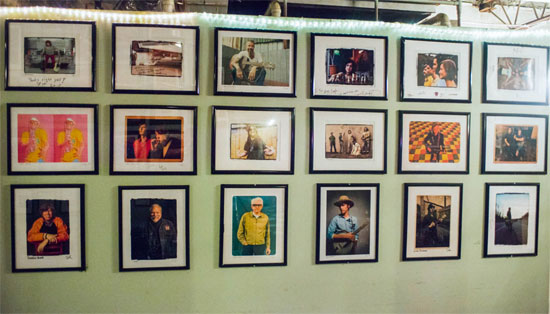 With their permisison, Gaither started taking photos of performers. “He had a crappy little point-and-shoot Sony camera,” Whitworth says with a laugh, “the size of a cell phone.” An onstage shot of Sparklehorse – shot with that camera and the oldest Gaither portrait – still graces the walls of the Grey Eagle.

Today it’s a rite of passage to have one’s image captured by Gaither, who has long since upgraded to professional gear. A highly in-demand portrait photographer, he’s shot hundreds of artist photos; many acts use his work in their official press kit and website. His classic portrait of Vic Chesnutt – shot from the venue’s roof looking down into the patio – was used on a Grammy telecast during its “in memoriam” presentation. Today the Grey Eagle’s walls are covered with iconic photos of artists in every genre; they’re as much a part of its character as the music.

The Grey Eagle today
As Whitworth and his wife anticipated the birth of their second child, the decision was made to sell to the Keiths. But he’d stay on as talent booker, a role he still plays today.

Russ Keith had initially come on board as a minor partner. “I started gathering the finances with the help of Mountain Bizworks,” he says. “And we went through the foundation’s courses there on running a business.” Keith says that when he took over, he added a storage space for 250 chairs as well as a monitor console, further improving the room’s sound. 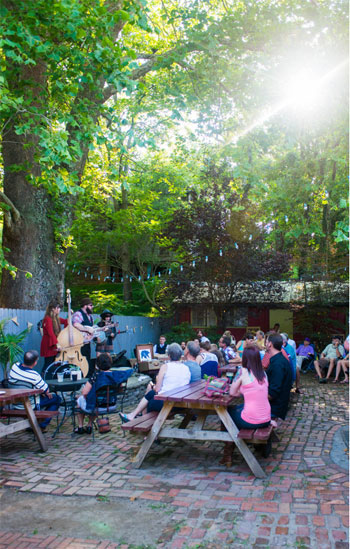 And he grew the staff. “Jeff started with five people,” Keith says. “We’re at almost 20 employees now.” Though doing so adds compliance headaches, he also got a liquor license; the bar at the Grey Eagle now features spirits alongside its beer, wine and cider offerings.

But the biggest change Russ Keith made was to the volume of activity. “I told Jeff, ‘Man, I want music in here every night. I have employees here I need to support.’” The venue added outdoor patio shows, and Sarah Keith focused on scheduling events – like a recent crawfish boil – that expand beyond just music. He says that today, the Grey Eagle “might have ten dark days a year.”

The patio shows present an opportunity for local acts to get a foothold and build an audience. “A classic example is Brody Hunt,” says Keith. The Asheville honky tonk singer-songwriter started out at the Grey Eagle playing on the patio. “And then he opened up for JD McPherson the other night: sold out, 550 people.”

For his part, Whitworth says that Keith’s more-music mandate meant that he “had to get more creative with booking, which is great.” He says he often heard from people who keep an eye on the Grey Eagle’s calendar: “They’ll tell me, ‘Thank you for hosting metal shows at the Grey Eagle. What a perfect room for it,’ or, ‘I’m glad somebody’s booking real hip hop shows.’”

Today the Grey Eagle is woven into the fabric of the region’s community and culture. “We try to give back to the community a lot,” says Sarah Keith. “I’ve been working on doing fundraisers for nonprofits and collaborating within the community to do events. Daytime events, too. Because we’re always open to that; it just adds to the excitement.”

A new projection system allows the room to be used to show sporting events; touring musicians use it for special effects, too. A closed-circuit camera captures the bands onstage, and displays those moving images on a large screen in the bar/restaurant area “for people who want to sit down,” Sarah Keith says. While the Keiths have to be mindful of expenditures – of, as Russ Keith puts it, “putting money into things when the building’s not yours” – they make sensible improvements when they can. “We want to keep our bar raised to a standard for the artist and as well as the customer,” he says.

Sarah Keith credits much of the Grey Eagle’s enduring success over the last quarter-century to “keeping it in the family.” Speaking in reference to former owner Whitworth, previous owners and herself and husband Russ, she says, “We’re not looking to sell to somebody who’s moving here from wherever, who has no idea what the history is. It’s such an intimate listening room, and everybody involved is like family.”

Whitworth agrees. “I would have hated to see this become a Live Nation venue.” He reveals that when he decided to sell the Grey Eagle, he had other offers. “Those didn’t feel right, and I walked away,” he says. “And one of the big things when I was selling to Russ was, ‘I don’t want to sell it unless I can still be involved.’”

Russ Keith chimes in. “And I said, ‘I don’t want to do this if you’re not going to be involved.’”

“Russ is all about preserving the legacy and maintaining what was already building,” says Whitworth. And 25 years after it began, the Grey Eagle builds upon what has always made it special. “The interaction between performer and artist is unparalleled in this room,” Whitworth says. “That’s the big draw for me.”