Carlos Santana: From Woodstock to ‘Supernatural’ to ‘Africa Speaks,’ Making Music with Intention (Part 1 of 2)

The venue is packed. The crowd is pumped. They’re here to see and hear guitarist Carlos Santana and his band. As the house lights dim, a giant projection screen at the back of the stage comes alive. It’s showing clips from the 1970 documentary film, Woodstock. The split-screen images are familiar to the older concertgoers; some of the younger fans who discovered Santana around the time of “Smooth” may be seeing them for the first time. But the entire crowd – young and old – is on its feet, clapping along enthusiastically as images of what was billed as “three days of peace and music” flicker across the screen.

Santana and his band take the stage to thunderous applause. The assembled musicians pick up their instruments and start to play. Onscreen, live-action close-ups of band members are seamlessly intercut with the Woodstock footage. As smoothly as old and new are combined onscreen, the here-and-now band leans into a spirited version of “Soul Sacrifice,” one of the songs that started it all back in 1969.

Santana has arrived. But then, he never left. 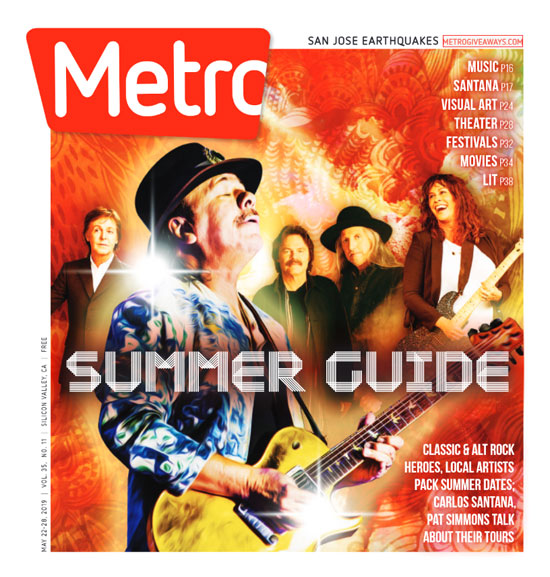 Santana has released more than two dozen studio albums; the band has a deep catalog from which to draw. But – consummate musician and performer that Carlos Santana is – this evening begins on a warm and familiar note, and the music immediately connects with the audience. “Santana’s music is very spiritual and sensual,” the guitarist explains in an exclusive interview for Metro Newspapers.

And he discovered that back before the band even got a record deal, back when the band was gigging at clubs and on campuses around the Bay Area. “The first thing we noticed is that the women move differently,” Santana says. “They become transformed into a whole way of moving their bodies, where you validate your sensuality without being crass, cheap, or vulgar.”

The Santana sound has its roots in a wide variety of styles, but from its earliest days the band channeled those influences into something nobody had heard before. “I was learning how to do this alchemy between blues and African rhythms,” Santana says. “We were learning from Willie Bobo, Jack McDuff and anyone who had congas and timbales. We put electric guitar with that, and something changed.”

Breaking Down the Door
From the earliest days of the Santana band, its mix of guitar-led jamming rock (albeit of a structured variety) and percussion rooted in Caribbean and African traditions was unique on the pop music landscape; Santana influenced a generation of musicians in many ways.

The term world music may have its origins in the early ’60s, but it wouldn’t come into wide use until the 1980s. By that time, Santana had been making music that drew from styles outside the European tradition for well over a decade. His Mexican heritage – Santana was born in 1947 in the Mexican city of Autlán, and spent a good part of his youth in Tijuana – has always informed his music. Other early influences like Hungarian jazz guitarist Gábor Szabó broadened his horizons. From an early age, Santana’s interests included folk and – notably – blues guitarists like B.B. King and John Lee Hooker.

But there was always something about the rhythms of African music that moved him. Those rhythms – in both their raw form and as filtered through Latin and Afro-Caribbean traditions – would come to be a key part of the Santana sound. “Since the beginning of the Santana band, this is a global consciousness music,” he says.

That consciousness finds its most recent expression in Santana’s newest release, Africa Speaks (out June 7 from Concord Records). The album is full of the trademark Santana guitar style, but the rhythms are even more pronounced and up-front than on much of the band’s previous material. “Everything that I ever learned came from Africa,” he says. “Coltrane, Chuck Berry and Cream got it from Robert Johnson; Robert Johnson got it from Charlie Patton. Charlie Patton got it from Timbuktu in Africa. No matter how you slice it or you shuffle it, you’re still playing African music.

“When I say this, I say it in a very divine way: it’s all the same. It’s still African language,” he says. And the guitarist comes by his African emphasis honestly. “Santana is one of the few bands that goes global, to each four corners of the world,” he says. “And we’re not tourists. We’re part of the family.”

Mallorcan artist Buika takes the lead vocal on the album, much of which is sung in Spanish. Produced by Rick Rubin, the sessions for Africa Speaks yielded almost 40 songs. So what will happen to the dozens that aren’t on the new record? “They’re in incubation,” Santana teases. Mentioning Mick Jagger, Lenny Kravitz and Sting, he says, “Eventually, maybe I’ll find artists that can come in and sing on them.”

Woodstock nation
Prior to the release of Africa Speaks, the most recent Santana album was 2013’s Santana IV. That album marked the long overdue (if temporary) reunion of nearly all members of Santana’s early 1970s lineup, the band responsible for hits like “Jingo,” “Evil Ways, “Black Magic Woman,” “Oye Como Va,” “Everybody’s Everything” and “No One to Depend On.” Each of those first three Santana albums reached the top ten on the Billboard charts, and the singles would all become staples of progressive radio, then AOR playlists and finally classic rock radio.

That celebrated lineup is also the one that played the Woodstock Music & Art Fair on the afternoon of Saturday, August 16, 1969. Sandwiched between a set by Country Joe McDonald and an impromptu performance by former Lovin’ Spoonful guitarist John Sebastian, Santana wowed the crowd at Max Yasgur’s farm with a 45-minute set highlighted by an incendiary reading of Nigerian percussionist Babatunde Olatunji’s “Jin-go-lo-ba” (today better known as “Jingo”) and an original, “Soul Sacrifice.” The band’s debut album wouldn’t hit record store shelves for another two weeks.

In his 2014 memoir, The Universal Tone, Santana admits that he was tripping on mescaline at Woodstock; he writes that his memory of the set is “a blur.” But the overall vibe of the festival stayed with him. “What I remember is energy,” he says. “The energy of people for three days sharing granola and good vibes: all the stuff that annoys the arrogant, cynical, slave people.

“It scares them to see that unity and harmony can actually happen before your eyes; people can not have needs for weapons or religion or politics, and we can actually share each other’s hope and celebrate each other,” Santana says. “There’s a reason why Woodstock happened. It was like a divine disaster area. And for us, it meant that now we had the freedom to coexist. It was not Altamont; there was no fights. Nobody got hurt.

“Woodstock really, really affected the rest of my life, my consciousness,” he says.