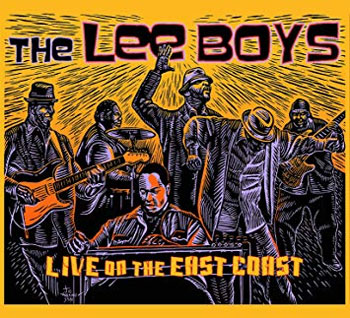 “We are really blessed and fortunate to have a vast array of styles within our music,” Lee says. He suggests that if one listens to the group’s music today, “you got some Led Zeppelin in there, some funk, some modern stuff, and then you got that real gospel drive. That all makes us unique, but we still keep it to the roots.”

Yet even though Alvin Lee and his brothers listened to music outside the church tradition, they weren’t connected to the wider music scene. Lee laughs heartily as he recalls receiving a royalty check not long after some of his songs started appearing on the group’s albums. He was shocked at the high dollar amount noted on the check, so he called his manager. “You mean to tell me this is the way I’m gonna get paid?” he asked.

The manager told Lee to look at the check again, and note the name of the song for which it was paying royalties. “It doesn’t look familiar,” Lee replied, “but it does say ‘Alvin Lee.’” On his manager’s advice, he called the issuing company and found that the royalty check was for “I’d Love to Change the World,” the 1971 hit by Ten Years After, written by that band’s leader and guitarist, Alvin Lee.

Another anecdote from an early Lee Boys concert further illustrates their initial lack of worldliness. “We were playing MerleFest,” Lee recalls. “It was a big festival, and we were all still young guys, [just venturing] outside of the church. [Up to then] we had always played our music in the four walls.”

The band was playing its set to a receptive Wilkesboro, N.C. festival audience. “We were jamming with the Travelin’ McCourys,” Lee says. “And the crowd was getting into it.” Between songs, the band’s manager approached Alvin Lee and told him, “Let this guy get on stage with you.”

“I said, ‘Oh, man, I don’t know this guy!’ I don’t let just anybody come up,” he recalls with a laugh. “We play gospel, and this was an older guy with a beard. I said, ‘I do not know who this guy is’!” But Lee’s nephews urged him to let the main join them. “So all of a sudden, this guy was sitting on stage with us. And the crowd – thousands of people – went wild!” The man’s name was Bob Weir.

Connecting that story to present day, Live on the East Coast features a mix of original Lee Boys compositions, traditional tunes arranged for the band, and classics from the secular world of rock, soul, blues and pop. One of those is a reading of Bobby “Blue” Bland’s 1961 hit, “Turn On Your Love Light.” But the Lee boys’ version of the oft-recorded classic bears a strong resemblance to the version found on the 1969 double LP Live/Dead.

Lee confesses that he was unfamiliar with the Dead’s version of the song. But it likely influenced him, albeit indirectly. Around 2002 or ‘03, The Lee Boys toured with Col. Bruce Hampton. “They did ‘Love Light,’ and Jimmy Herring had this little guitar lick in it,” he says. Lee filtered that influence through his gospel approach, and unknowingly ended up with something that has a Grateful Dead feel to it.

The Lee Boys found an audience with the jam band scene. “Warren Haynes took us on the circuit when we were young,” Lee says. “He always let us jam with him. And he took Roosevelt out with him, too,” he says, referring to nephew and steel guitar sensation Roosevelt Collier.

The band has changed over the years. Brother Glenn – founder and original leader of The Lee Boys – passed away in 2000, the same year that the family’s patriarch died. “For sure we’ve evolved,” Alvin Lee says. “The original band consisted of three brothers and three nephews. And now we’ve added another family member, Chris [Johnson, pedal steel], because Roosevelt is focusing on his solo career.”

Lee says that he and brother Keith (on lead vocals) are “like the fathers to our three younger nephews. And we’ve added the influences of theirs, so now we’re able to surface some of the stuff we’ve always been dreaming about, [combining] all of these genres with the sacred steel.”

While Lee is proud of Roosevelt Collier’s crossover success – “I think he’s in playing in Africa somewhere now,” he says – he prefers to stay with The Lee Boys’ gospel-meets-secular spin on sacred steel music. I”ll tell you why I solely play with The Lee Boys,” he says. “I like to keep it just the way it is so people can enjoy this true essence. I get that feeling that I know I’ll never get anywhere else.”

The inspirational underpinning of the group’s gospel roots remains; witness “Walk With Me Lord” and “Come On Help Me Lift Him Up” on the new album. But Lee insists that it’s not necessary to subscribe to the Pentecostal church’s beliefs to appreciate The Lee Boys’ music.

“That’s one of the reasons why we are able to play with so many different people,” he says. “Because it’s all about the music. Although it came from a spiritual element with us, we want to be able to play anywhere: bars, clubs, festivals, churches. Because we think the music is a universal language.

“So many people could be healed and touched by music,” he continues. “Not necessarily the words, but by the music, what they’re hearing. And that’s our message. If somebody can be touched through our music, then our job is done.”