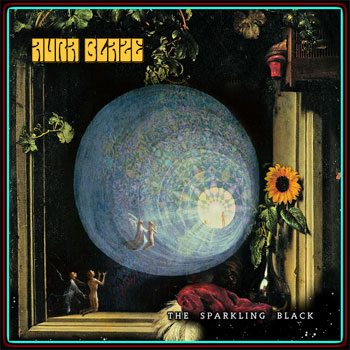 Well, well: this is unexpected. The press on this album suggested something in the vein of Pink Floyd; oddly, one act I don’t hear in this music is Floyd. But as “Overture” Solar Emerge” opens, Aura Blaze sounds more like Caravan. As the song unfolds, the instrumentation reveals hints of National Health and Egg, more groups associated with the Canterbury, England jazzy progressive rock scene of the early ’70s. But Aura Blaze is from New Jersey. The overture has other things going on, too, including an early rock pastiche section that will remind listeners of a certain age of both John Lennon’s “(Just Like) Starting Over” and The Motors’ “That What John Said.” The music continues to draw from interesting sources: “Good While It Lasted” is equal parts Jellyfish and Sir Army Suit-era Klaatu. Rhode Rachel (Aura Blaze’s prime mover) has both good taste and a sold knowledge regarding how to write a memorable tune. “Eyes of the Rising Sun” has a spoken section that hearkens back to prime-era Moody Blues. The album seems to get more deeply textured as it continues; “Manipulation” sounds like Asia crossed with Long Distance Voyager-era Moodies. “Keep On Believing” suggests Beach Boys by way of (again) Jellyfish. “No Soul That Couldn’t Be Sold in Hollywood” feels like a cross between Ultravox and David Bowie. “Hope It All Works Out” has strong echoes of Electric Light Orchestra. And if you can imagine a cross between the Moody Blues (yet again) and Hawkwind, it might sound a bit like “The Sparkling Black.” The closing track, “Reprise: Lunar Dissolve” sounds at times like a mashup of Giorgio Moroder and ABBA; no, really. I get the strong sense that Rachel’s record collection looks a lot like mine. If there’s a current-day corollary to Rhode Rachel, it might be Ben Craven; the two artists differ greatly but share some musical sensibilities. If you dig any of the aritsts mentioned here, The Sparkling Black may be worth investigating.