Though it’s easy to take water for granted – just turn on the tap and there it is – for hundreds of millions of the Earth’s people, access to clean water is a goal, not a reality. The United Nations considers universal access to clean drinking water a human right, but that doesn’t magically make it happen. In observance of Earth Day 2019, Rising Appalachia played a show in their adopted hometown of Asheville to raise funds for clean water for Africa

With local corporate sponsorship plus support from Asheville-based nonprofit MountainTrue, previous French Broad RiverKeeper benefit concerts have funded a half dozen drinking water wells in the sub-Saharan African countries of Togo and Uganda. Karim Olaechea, communications director for MountainTrue notes that proceeds from ticket sales at this year’s event will fund additional wells there, providing clean drinking water for thousands of people. 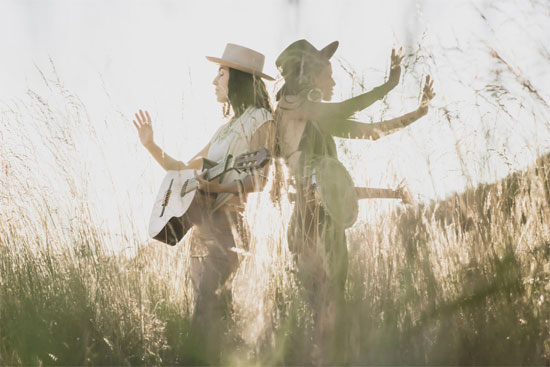 Leah and Chloe Smith, leaders of Rising Appalachia are well-known for their active support for environmental and social justice initiatives. “As environmentalists and as activists, we have always been invested in creating a more sustainable world, and a more sustainable future at large,” says Leah. “Water is a resource that’s deeply, deeply tied to our ability to be alive. And it feels very natural for us to be involved in any kind of water upkeep [initiative].”

Leah says that the Standing Rock movement in South Dakota was “the tipping point that brought water-as-life and clean water issues to the forefront of contemporary culture, activism and analysis.” Rising Appalachia provided on-the-ground support for that movement, and encouraged its fan base to get involved as well.

“Rising Appalachia works at the forefront of a lot of different causes,” Leah continues. “Our work is to be the storytellers and the message bearers. Our work is to tell the stories, create catharsis and create a place where people can have deeper conversations around the issues at hand.”

“We were activists before we were musicians,” explains Chloe. “So there’s always been a natural instinct for us to be aware of what’s going on in our surroundings and take part in movements and missions to make the world a better place.” As a popular recording and touring group, the members of Rising Appalachia collectively recognize the power the group has to share issues of importance. “We want to use that momentum to do more than just feed our own image and ego,” Chloe says.

“Our mission has always been to be catalysts,” Leah says. “We use music, culture and conversation to bring people closer together, to narrow our differences and showcase our similarities.”

Chloe and Leah aim to practice sustainability on and off the road. When touring, the band endeavors to live according to the principles of its “Slow Music Movement,” traveling at a deliberate pace and using trains and other alternative-by-current-standards modes of transportation. “It’s a way for us to sort of talk to the music industry – and work within it – to encourage slowing down a bit and consider sustainability,” Chloe says.

At home, many of the same values apply. “I have a small house, and I live on a working farm outside of Asheville,” Chloe says. “My mission when I get home is to live light and live simple.”

With so many worthy causes of global import from which to choose, it’s sometimes difficult to settle on which ones to support. Leah and Chloe see part of their role as doing the legwork of researching the causes, and then providing real-word ways for like-minded fans to support those efforts. The group seeks to take into consideration all of the nuances of activism, Leah says. “Because It’s not a cookie cutter way to move in the world; It’s very nuanced.”

Leah emphasizes that fans of Rising Appalachia are already doing their part. “We are consistently inspired by the work of our fan base,” she says. “Often, the people who know our music and come to our shows are the people who are on the ground doing profoundly well-thought-out work, action and cultivation in their own communities. It’s really a two-way street.”

Like many good lyricists, Leah provides an apt metaphor to make her point. “We’re not the deeply-rooted, sturdy, stable, large-trunked oak tree,” she says. “We’re the pollinators; we go from community to community, collecting their pollen in their stories and their magic. And then we share those stories in a way that, hopefully, carries good ideas and inspiration.”