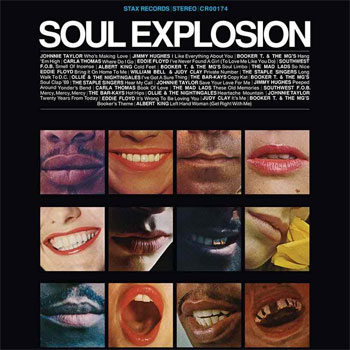 There’s undeniable appeal in retrospective compilations. With the benefit of hindsight and historical context, compilers can curate a set of songs that displays the character of a given theme, be it a style of music, a genre, or a survey of a particular label’s output. Legendary Memphis label Stax has been the subject of quite a few such comps: the Complete Stax/Volt Singles – a series of four box sets to date – amass something like 40 CDs worth of music (I don’t have the CDs handy; they’re in the next room, and I have a 20-year-old cat sleeping on my lap, so just trust me on this). And there have been many others including an Isaac Hayes retrospective and a 9CD set that collects everything Stax put out in a singe year, 1968.

But there’s a special kind of value in a different sort of compilation: the kind that serves as a slice in time, put together without the advantage of context or hindsight. And at or near its height, Stax did just such a ting. They put together a 2LP set called Soul Explosion. Long out of print, and never reissued during the CD era (save for a Japanese release of dubious legality), Soul Explosion is a wonderfully idiosyncratic, wildly varied collection of 27 songs from the venerated label. And in 2019, Craft Recordings has brought the double-LP back to life with a faithfully reproduced vinyl reissue.

Casual listeners may think they have Stax pegged: a set like this features the likes of Johnnie Taylor, the Staple Singers, Albert King and Booker T & the MGs, right? Well, yes: all of those artists are represented on Soul Explosion, and in select cases their best-known work is featured. Taylor’s “Who’s Making Love” opens the album. And the oft-comped “Private Number” a soulful duet featuring William Bell and Judy Clay, is here as well. Searing blues master King gets two tracks, as do the Bar-Kays.

But some left-field cuts from the label undercut the idea that Stax was solely soul. “Smell of Incense” by Southwest F.O.B. is a slice of light psychedelia. The MGs’ “Hang ‘Em High” is centered around Jones’ organ work, but it’s not at all like, say “Green Onions” (not comped here). Neither is “Soul Limbo,” a kinetic number that – thanks to Jones’ rinky-dink organ tones – would be just right for a roller skating session. Not to mention the track’s unexpected and delightful marimba solo!

The Mad Lads’ “So Nice” reached the lower rungs of the R&B Top 40 in 1968 (#35) but a half century later, it’s not at all well known. Slightly better known id Eddie Floyd’s virtual reinvention of “Bring it On Home to Me,” #4 on the R&B charts and #17 on the mainstream charts. The spiritual/protest/gospel of The Staple Singers’ “Long Walk to D.C.” adds a bit of timely social relevance to the set. Far less serious – but undeniably fun – is “Copy Kat,” an apt title for a Bar-Kays song that continues the group’s (admittedly irresistible) tail-chasing practice of seeing how many variations on “Soul Finger” it can produce.

A few relative obscurities surface on Soul Explosion. The blues/soul workout of Muscle Shoals artist Jimmy Hughes’ “Peeped Around Yonders Bend” is a non-charting single that deserves wider hearing. And the heavy psych (fuzz guitar plus horns!) of Southwest F.O.B.’s “Mercy, Mercy, Mercy” is an initially unrecognizable cover of the Joe Zawinul song popularized by Cannonball Adderley. It simply must be heard. 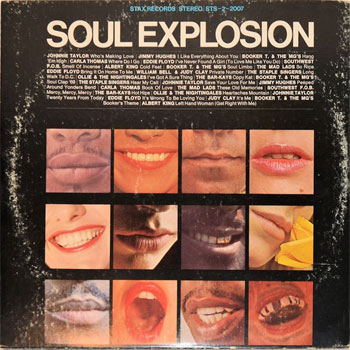 On its original release, Soul Explosion barely dented the album chart, reaching a desultory #172 on the Billboard 200. In 2019 it’s one of the best possible ways to travel safely back to 1969. The 2LP set features faithful reproduction of the original release’s gatefold jacket, and careful remastering from the best sources available.

NOTE: A bit of elucidation may be in order. In conjunction with the reissue of Soul Explosion, Craft Recordings has put together a Spotify playlist called, reasonably enough, “Stax Soul Explosion.” Listeners should note that the 55-song playlist is expertly curated, and features lots of gems that any self-respecting lover of soul will already have in his or her collection. But it’s worth noting that the only connection between the playlist and the 2LP set of the same name is … the name. There is exactly zero overlap song-wise between the two. Both are great, but they’re not the same thing. Just sayin’.