Note: This is the second of two feature/interviews with Peter Asher and Jeremy Clyde, originally written for two different print outlets. There’s a tiny bit of overlap in the introductory sections, but the bulk of each story features original material unique to that feature — bk 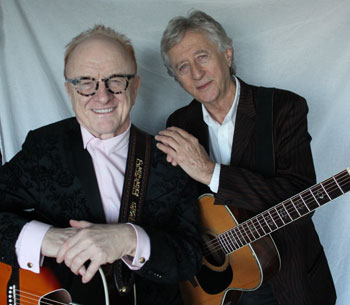 Back in the early 1960s there appeared in London a pair of singing, guitar-playing duos. One was Peter and Gordon. They scored hits with “World Without Love” (written by one Paul McCartney, “I Don’t Want to See You Again,” “Woman” and many others. The other was Chad & Jeremy; their success was more in the U.S. and Canada, with hits like “Yesterday’s Gone” and “Willow Weep for Me.” In those heady pop culture days, fans could be forgiven for confusing the two acts. And they sometimes did.

Today, decades after their original runs, one member from each of the duos – Peter Asher and Jeremy Clyde – have teamed up for a show of their own, one that draws from the best the two acts had to offer. The duo has embarked on a series of City Winery shows, bringing their evening of songs, stories and visual images to enthusiastic audiences. I spoke with both men ahead of their run of dates together. – BK

How did you first meet?

Jeremy Clyde: Well, we’re trying to work that out, Peter and I. We reckon it has to have been in 1963, and think it must have been at the Pickwick Club, which was very much a sort of haunt of actors and musicians and hipsters generally. [Peter and Gordon] were playing down there; a number of other bands used to play down there as well.

Was there any kind of rivalry between the two duos back then?

Peter Asher: Not so much rivalry, but mutual acknowledgment, certainly. We knew each other in London. We were aware of each other and there were a great many similarities. It was kind of strange: there were only two duos in the British invasion and we were strangely similar. The tall, handsome one singing the low part and the short one, wearing glasses and singing the high part. And people did confuse us a lot. Before Gordon died, we did do a show with all four of us on stage together at one point, finally proving that there were, in fact, two distinct and separate duos. I think it was honestly doubted at one point, because people thought of us as very much fungible.

Jeremy: So there you are! We were all swimming in the same pond and knew each other, indeed.

When was it that the double-duo appeared onstage?

Jeremy: 2008 and 2009, we did I think two gigs, and that was the only time we managed to, all four of us. We went on stage and sort of did a sort of chaotic version of “Bye Bye Love,” but it was fun, amazing, very historic. So that was before obviously Gordon left us, because he’s been gone now 10 years or something.

When you first put together this show, was it simply a matter of Peter singing Chad’s part on C&J songs and Jeremy covering Waller’s part on Peter and Gordon tunes, or was it more involved than that?

Jeremy: Well, it’s pretty much that. Gordon used to handle the sort of the melody and Peter would handle the harmony and that was kind of how Chad and I were. So there was an element of that. But I’m not trying to be Gordon, and Peter isn’t trying to be Chad. But when the obvious harmony line is the one that Chad sang that’s the one that Peter sings. We’ve had diehard fans of either of the duos come with great suspicion to the gig; they’re prepared to go to battle because there’s a memory that’s being besmirched by the other guy, and they’ve all come away smiling and saying, “Actually, it was pretty good; I enjoyed that.” So we seem to have got away with it. And the thing about it is with Peter and I, is not only do we go back a long, long way and are old friends, but we’ve also got twice the hits and twice the stories, so you get a pretty good package. And also we show film clips; Chad & Jeremy did Batman and Dick Van Dyke and Patty Duke Show and others, and so we show clips from that as well, and then Peter show a clip of him and Gordon being forced to do something extremely stupid on the Red Skelton Show, and that’s fun. So we send up our own backgrounds and the mistakes we made. It’s a jolly show and stuffed with tunes.

Peter: Of course, I had to learn [Chad & Jeremy’s] songs, which was fun. I vaguely knew them because of singing along with the radio, but I hadn’t learned them properly. The other part, of course, was writing the show, deciding how to fit everything together – the stories and the songs and the jokes or whatever we had in mind – into something that we thought people would enjoy sitting still for for a couple of hours.

You both have a good bit of acting experience. But are you natural storytellers?

Jeremy: Well, yes, I’m an actor; it’s my day job back in England. So if I’ve got the script down, I can sort of deliver and make sure we get the laugh in the right place and things like that. I do enjoy telling the stories; the trouble is, there’s too much!, I mean particularly Peter who has done an enormous amount after being Peter and Gordon and survived. What I’ve done hasn’t really traveled over here to be honest. But we’ve had to be ruthless, both of us, with our careers and sort of allude to them and say, “Yeah, well, we did rather well there, thanks,” and then move on quickly to a song.

Peter: There must be some degree of natural ability to it, I suppose. I don’t know. I was an actor as a child. So, I’m quite at home performing, in a way. And even though it is storytelling, it is still ultimately a performance of some kind, even if the script is my own. So, I enjoy doing that and I think of it as a conversation with the audience. I welcome responses and participation or heckling or whatever anybody says; it’s okay with me. I enjoy doing it.

To what degree does audience response affect the tone and character of your performance?

Peter: Very much. I think of it as a conversation. It is a two-way street. It would be really odd to do that without the audience. I wouldn’t know how to time anything or do anything. I would feel distinctly odd telling those stories into space. So, yeah, the audience is a very important element.

Jeremy: The show has been honed, but we’re still editing it, trying out new things and so on. It’s lovely to entertain people. And that being the name of the game, we’ve also put in moments where he and I have connected over the years. For example, he once rang me up and said, “I’ve discovered this great new singer; you’ve got to come over and listen to him and have some dinner and we’ll get him to play you some stuff.” And that guy was James Taylor.

And then there’s another whole thing where he and I are in the press room at Apple, the Beatles headquarters at Savile Row in London in ’68, and my old friend and his old friend indeed, the late great Derek Taylor, who was the Beatles’ legendary press officer sees Peter and I talking in a corner. He said, “Okay, we’ve got to set up a photograph because everybody’s confusing Peter and Gordon and Chad and Jeremy. We’ll get a picture out that’s really going to confuse everybody!” And there it is that we show the picture: I’m wearing Peter’s glasses! It’s an amazing artifact, and what is lovely about it is that 50 years later Derek’s little joke has come true. And there’s something rather enchanting about that.

You both have exceedingly full schedules. What’s next for you after this run of dates together?

Peter: Well, I’m working on an animated film with Hans Zimmer; I do a lot of film stuff with Hans. This is a film I can’t talk about yet, but it’s going to be a big animated movie for 2020. I’m working on some songs for that, and will be producing some of the soundtrack. What else am I doing? I still do shows with Albert Lee from time to time, which is quite different with having someone that doesn’t have a video or anything; it’s a bit more music-oriented because Albert is an amazing virtuoso. And the Sirius XM radio show takes up quite a bit of time because I have to keep writing those and recording them to stay ahead of the game, especially when I’m going out of town.

Jeremy: I’m also doing my own shows. I’m working with a wonderful cellist called Emily Elkin, and some of the time I’ve worked with a wonderful 12-string guitarist Emeen Zarookian, and then another violinist, Kaitlin Wolfberg. They’re all very, very young and very keen, and like what I’m doing. And that has brought with it a whole ‘nother audience; this is certainly exciting. I’m not doing the usual thing of two guitars, bass and drums; I’m trying something completely different.

I’ve got all these songs – a huge amount of material – and I realized that they were going to leave with me unless I recorded them. So because they were in my bottom drawer, I started recording them under the general heading of The Bottom Drawer Sessions. I put out four albums, just for myself really very quietly, and the people are beginning to really pick up on this. Not only people of my generation but people of much younger generations are really interested. So that’s been a wonderful whole new adventure.

The casualty of all this – and again, we refer to it lightly in the Peter and Jeremy show – is that I have this other life as an actor. I did a play in the West End last year, but I’ve sort of told my London agents that I’m not available for that sort of thing anymore for a while, because I’m not. I’ve got all this to do, and I cannot be in two places at once.

Peter, as we’ve noted, you’re closely associated with the Beatles. And of course Paul McCartney lived with you for awhile at the height of the Beatles’ fame. In light of your own career and body of work, does it ever bother or frustrate you that people are like, “Oh, Peter Asher? Nice. Tell me about Paul”?

Peter: No, not really. I mean, they do that sometimes. I think if that was the only thing I was known for, it’d be deeply annoying, but I think I’ve done enough other stuff that there’s a bit more to me than that. No, that’s okay.