Way Out West with Sonny Rollins, Part One

With its unusual cover photo and its non-standard trio format, Sonny Rollins’s 1957 album Way Out West stands apart from the jazz releases of its era. Sixty years after its release, Way Out West is widely recognized as an important landmark in both the career of the Harlem-born tenor saxophonist and in the history of jazz. In commemoration of the album’s 60th anniversary, Craft Recordings has released a 2LP deluxe reissue of Way Out West, in a lavish boxed set that features the original album in stereo plus a second disc of session outtakes, some heard for the very first time.

Sonny Rollins’s Road to Way Out West
The iconic and influential saxophonist was 26 years old when he made his first trip to California to record Way Out West. Recording for the first time with drummer Shelly Manne and upright bassist Ray Brown, Rollins cut the groundbreaking album in a single late-night recording session. But even at his relatively young age, Rollins was a seasoned performer, one very familiar with working in the studio.

Born in New York City in 1930, Walter Theodore “Sonny” Rollins began his professional career as a musician at age 17, backing bebop vocalist Babs Gonzales and playing with bands led by trombonist J.J. Johnson. Rollins’s first studio dates came within a year and a half of his professional debut. Some serious run-ins with the law limited his ability to make music, but with his reputation as a superb and expressive saxophonist, Rollins still managed to record dates with some of the biggest names in jazz.

In 1949 Rollins played on sessions with Bud Powell’s Modernists; tracks from those sessions would appear scattered across eight albums released on Blue Note. By 1951 Rollins played sax in the Miles Davis Sextet, recording for Prestige. In the same period — and sometimes during the same recording sessions — Rollins led his own quartet, making recordings with bassist Percy Heath and a rotating cast of drummers (Roy Haynes and Art Blakey) and pianists (Kenny Drew and Miles Davis). Rollins’s first session as leader yielded the original “I Know,” a tune to which he’d return in 1953, then recording with the Modern Jazz Quartet. Rollins’s sessions with the MJQ were the first to be released on an album credited to him. 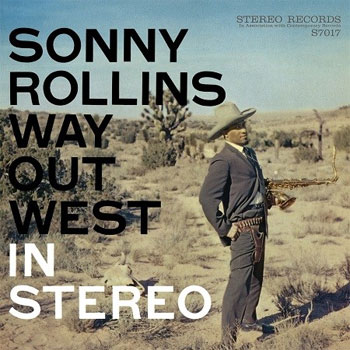 By late 1953 and into ’54, Rollins was even busier. He played alongside Thelonious Monk on sessions by the latter’s quintet, and he was recorded playing sax in quintets led by Art Farmer and Davis. By the end of 1954 Rollins had recorded more sides as a band leader, and co-led a quartet with Monk.

In 1955 and ’56 Rollins played and recorded extensively with bands led by Clifford Brown and Max Roach, still finding time to play on studio and concert recording dates for Davis and Monk plus sessions under his own leadership.

Up to this point, most all of Sonny Rollins’s recording dates had taken place in New York City, or in nearby New Jersey, and the resulting recordings would be released across a confusing array of albums. But in March 1957, while touring as part of Max Roach’s band, Rollins made arrangements to record an entire album’s worth of music for Contemporary, a Los Angeles-based label owned and operated by Lester Koenig.

Koenig’s Contemporary was the first — and for a brief time, the only — jazz label to release albums in the new stereophonic audio format. Those records were issued on a Contemporary subsidiary label called Stereo; the first stereo sessions for the label yielded Hampton Hawes’s Four! In fact, Rollins’s sessions took place two months later but made it onto record store shelves ahead of Hawes’s LP, making Way Out West the label’s first stereo release.

Today, original pressings of the monaural Way Out West LP change hands for more than US $200 (about £140), while rare and prized original U.S. stereo pressings command $350 (£250) or more.

Way Out West
Three of the six songs on Way Out West relate to the album’s theme of the American West. Johnny Mercer’s “I’m an Old Cowhand (From the Rio Grande)” was first heard as sung by Bing Crosby in the 1936 comedy motion picture Rhythm on the Range. Rollins’s reading — highlighted by Manne’s clippety-clop percussion — evokes the West and wordlessly conveys the humor that characterizes Mercer’s satirical lyrics.

“Wagon Wheels” was the theme song from a 1934 Western of the same name; Manne’s drum figure captures the feel of a rickety covered wagon navigating a rocky trail, while Brown and Rollins engage in soulful and engaging melodic interplay.

The album’s closing number is the title track, one of two Rollins originals on Way Out West. Less overtly “western” in its feel, “Way Out West” features Manne holding down the rhythmic element while both Brown and Rollins explore the melodic possibilities of the swinging tune.

Way Out West‘s three remaining tracks — Duke Ellington’s 1934 jazz standard “Solitude,” Isham Jones’s “There is No Greater Love” written in 1936 and Rollins’s original “Come, Gone” (based on a 1918 popular song, “After You’ve Gone”) — all serve to display the potential and versatility that exist within the relatively novel tenor sax/bass/drums trio format.