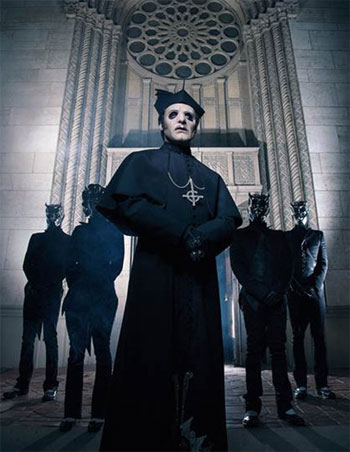 Swedish rock band Ghost cuts a striking image, with masked musicians and a lead singer, Tobias Forge, who used to dress like a demonic pope (today he wears slightly more conventional garb onstage). The theatrically-focused band is in the midst of a world tour in support of its fourth album, Prequelle.

I saw Ghost live onstage on a date early in the tour, and then spoke with Forge in October. During our conversation, we went into some areas not often discussed in a rock interview. We talked about the often-changing lineup of Ghost musicians (other than Forge, all the Nameless Ghouls are relatively recent additions to the band), the after-effects of Forge’s identity being revealed by ex-members, the changes in the band’s music since its earliest releases, and the sort of messages Ghost aims to get across to its audiences.

Not to take anything away from their considerable abilities, but I get the sense that the Nameless Ghouls are, to some degree, fairly interchangeable within the context of Ghost’s music. You could replace them at will, and people in the audience would not notice. Do you think there’s room within Ghost for the musicians to express themselves musically, or is their one and only job to execute the material as you’ve developed it?

It’s hard to answer that with a yes or no. I mean, theoretically, you are correct. It’s not like it’s just a blues jam and there’s all these other chord changes and whatever happens in there. There’s just a little bit of a free form. Obviously, as long as you have musicians who are able to play, you can always make it balance correct. Technically, you can play the right note, but there’s a big difference in playing that way and the other way, even though you’re playing the same note at the same places. We’ve had various drummers, and some of them – even though they’ve played the same amount of hits or the same correct fills – sounded very differently from each other. I would say it’s like having a theatre play.

And that is just performance wise. Then, there’s the whole, obviously, chemistry, personalities and all that. So, for me, I don’t want to change all the time. I definitely don’t want to do it on a minute’s notice and just have someone else coming in. I prefer to have the same ensemble for a longer period of time, but the thing is, Ghost is a little bit of a regimen, and you’re sort of stepping into a script. In theatre, you might have actors who don’t necessarily have writing ambitions; their ambition is to be an actor. Whereas in music, you have a lot of musicians who have ambitions to have their own bands, and they might be in several different bands. So, with my concept and with our setup, we will always have to be very open to the idea of people wanting to leave and wanting to do this for awhile, and then sort of grow tired of it, and want to do something else. And obviously, that has happened many, many times.

You were unmasked, so to speak, about a year and a half ago. Now that fans now know your name, does that change things at all in terms of how Ghost moves forward?

Not–I don’t know the answer to that because ever since Prequelle came out, and [we introduced the new the new character to replace Papa Emeritus], there’s been a lot of speculation as to if that’s what the result of that [unmasking] thing. And I’d say it was not. Because the plan for Cardinal Copia, for example, and me looking different and not being already a pope, but possibly becoming one … that was already in the making years before. So, the changes from a public form of view just happened to coincide with the already sort of scripted plan.

Obviously, there’s been a little bit of a change in the ways that I conduct interviews and in the way that I’m being written about in media, being titled as myself rather than Ghoul. I don’t really know if that was a good thing or … I don’t find it a bad thing, but I don’t know the answer. This thing happening backstage reached the surface and had me change my public appearance; I don’t know how things would’ve been had that not happened. But here and now, I don’t consider that a bad thing. Being on tour on a day-to-day basis, there’s not a whole lot that has changed. There have always been people standing around by the bus who knew who I was. So I’m not sure it has changed that much. 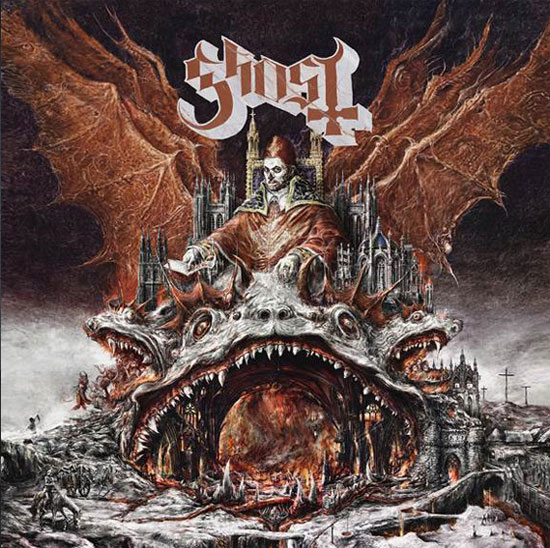 When you’re writing material for a new album, do you approach it with the eventual live performance in mind?

Yes. Each record needs to contain a certain amount of songs that we can play live, because we’re still in the build-up phase. We’ve done four records now. I think that we should be able to do a few more before we reach that point that most bands end up in sooner or later where you’re not adding a whole lot to the repertoire. You might play a few new songs, and those few new songs will be exchanged for another few more songs next time around, but you’re still sort of sticking to the classics. I think that Ghost is still in the making. To whatever extent our material in the future might be regarded as classic, I think we’re still adding classic to the repertoire. I’m very much listening to the ground and trying to have the radar on as to what works when we play. And I think that that comes from having played live a lot.

I don’t think I’m in any way unique in that aspect. I think that most bands that have spent a lot of time live have tended to do that same thing as they write their third, fourth and fifth record. I like to draw parallels to Iron Maiden and Metallica. I think it’s not a coincidence that Piece of Mind and onward were sort of “lower” records with less movement than a lot of the songs from the first two records. And the same thing with Metallica. I think that when they made the Black Album, it’s not a coincidence that the record was lower. It was not only for it to sell a lot. It was because they had found themselves in a situation playing in front of a lot of people in large, booming halls: you want material that will feel good. In the same way that – unless you’re a sadist, and your partner gets their shit kicked out of them or something – if you’re in a somewhat normal sexual relationship, you will try to infuse new, pleasant tricks in bed activity that the other person responds well to. I think the same thing when you’re a band and you have an audience. You try to do things that you know we will all enjoy!

When I saw Ghost here in Asheville, during the show, you made a point of speaking to the audience … and I’ve got to paraphrase this, obviously, because it was a few months ago. You talked about the reality that some of us in the audience would be going home alone after the concert, and that being okay. I’m curious if that was part of your normal – for lack of a better word – stage banter.

That is usually being said in one way or form every night. But [considering] the ordeals that us ordinary people are facing with people passing, or a partner leaving, or friendship broken, or the things that we all face at a certain point in time, I think it’s important to realize.

This is obviously not something that is completely copyrighted by young people, but unfortunately, I think especially when you’re young, especially when you’re a teenager and in your early 20s, you might have some perspective, but you have little perspective compared to someone who has lived twice as long, in their 40s. I think it’s important to [realize] that things do change. Things will always change. And they’re more likely to change if you’re open to the idea of change. Maybe there’s something that you have to do in order to make that change, but that change might be to move or to just break your life up and try to maybe restore it someplace else; whatever it takes, just do something.

I think that a lot of people could find a little comfort in knowing that whatever feels like the end of the world – be it the fact that I’m alone, or be it the fact that my brother or mother or father died – there’s a great chance that a year from now I won’t feel the same. It doesn’t mean that someone will come back to life or that partner that just left will come back, but it will feel different. It’s always changing; not from completely shit to a golden nugget, but you will change with time, and I think that that is important to understand, especially when you are at one of your life’s lows. With perspective, we can most likely look back on that as being a low point because you’ve come to a higher point. That doesn’t all of a sudden mean that you’re two meters [tall], well-tanned and a millionaire, but you know? I think that that’s an important thing to bear in mind.

I’ve spent a lot of time between maybe 14 to 25 regarding myself as quite an unhappy person because of this, that, and the other reason. But things change, with perspective. When I was a teenager, I had several friends and close people around me who committed suicide, and it’s a great shame knowing that had they just tried to overcome that period of time or a period of time, things could have evolved very differently, but the fact was that they were 17, 18 years old and they lacked perspective. They didn’t understand that just because you’re in high school and it feels like shit right now, there are a lot of things you have ahead of you. There’s so many other roads, then, that you can go down; some of them might lead to even worse things. But a lot of them also lead out of it.

Especially when you’re a teenager or when you’re at a life crisis, it just feels like this is the only path; you lack the tools to just change the angle of what you’re looking at, and maybe a guiding light that can light up the forest ahead of you, [so you don’t] just see a big, black void without an exit. You have to walk through it. Sooner or later, you will come to a road, or a street, or a mountain. And something will change.