John the Martyr: Up From the Subway

Contrast is a useful and popular device in music. Fast and slow, loud and quiet, simple and complex: creatively combined, the differences can make for some fascinating and memorable music. A group called John the Martyr takes this old idea in a new direction, combining musicians of different generations.

The 10-piece group is a collective of young New Orleans musicians. But out front is soul-stirring 70-year-old Harlem vocalist Bill Hudson; rooted in tradition, John the Marytr makes music with a gospel feel, adding blues and jazz into the rich stew. 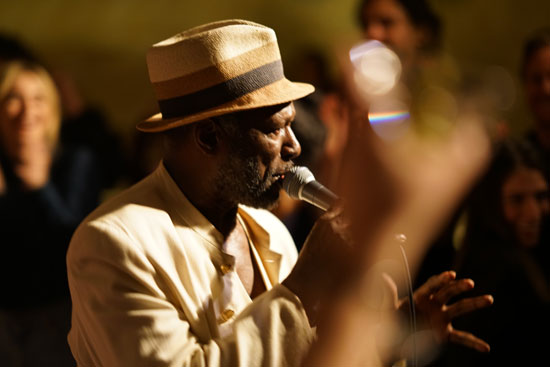 Hudson’s experience as a singer spans many decades, but his latest break came while he was performing in the New York City Subway system with an a cappella group. As part of the MTA’s Music Under New York program, Hudson entertained diverse crowds underground, on board the Staten Island Ferry, in Times Square and at Macy’s. Hudson says that those experiences improved his skills. “I learned how to ‘read’ or anticipate what the crowd wanted to hear, be it a ballad, up-tempo or whatever.” He says that skill is critical: “Grab their attention … then keep it.”

Guitarist Kyle Ridley happened by one day and was impressed; the two struck up a conversation and then a friendship. They eventually formed John the Martyr. A single, “Feeling Good,” offers a taste of the group’s alluring sounds; a self-titled debut album is due on vinyl for Record Store Day (April 13, 2019) and via digital in May.

Childhood friends Ridley and drummer Dustin DiSalvo reunited in New York City after Ridley began working with Hudson. “Kyle and Dustin were working out of a shut-down church where they started recording the demos,” Hudson says. That building—formerly St. John the Martyr Church at 250 East 72nd Street in Manhattan’s Upper East Side—provided the group with its name.

Some advice from his grandfather many years ago set Hudson on the musical path he follows today. “He told me, ‘You can fail at something that you don’t love, so you might as well take a shot at something you do love.’”

And Hudson loves singing with John the Martyr. “I’m motivated by being around talented, creative people,” he says. “It’s rejuvenating to see the fruition of one’s labor.” The song “Feeling Good” was the first collaborative songwriting effort between him and Ridley. “To be part of a song’s birth is very gratifying for me,” he says. “So things like that keep you raring to go!”