One of the most celebrated and admired acoustic guitarists working in a fingerpicking style, Leo Kottke is an acknowledged master of the 6- and 12-string. With more than two dozen albums to his name (plus a pair of collaborative albums with Phish bassist Mike Gordon), Kottke continues to explore the potential of his chosen instruments. But he does so in a relaxed and unassuming manner.

Interested in music from an early age, Kottke’s first instrument was trombone; he took lessons for a few years, but eventually applied himself to guitar instead. Yet in some important ways, his trombone training influenced his approach to the stringed instrument. “The trombone paid off because I knew how to build a chord,” Kottke says. “So I built the simplest, most ergonomic thing you could get out of a guitar: an E chord. And it took me over.” 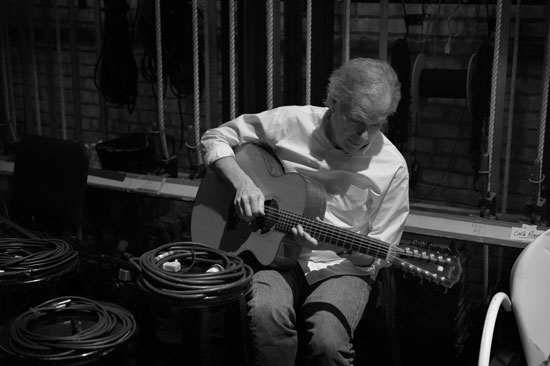 Kottke’s study of trombone also immersed him in musical theory. “It gave me a powerful sense of structure, and the way that given sections relate to one another,” he says. “I got to hear sonata forms, concerto forms and – especially – band music.”

Perhaps surprisingly for an artist whose repertoire is generally classified as folk and/or Americana, Kottke counts the work of John Philip Sousa as a key early influence. “When Sousa wrote a good march, those were really great fun to play,” he says with a warm chuckle. Playing those compositions “not only allowed you to hear how something like that works, but they involved your entire body: dressed in a goofy suit with a ridiculous hat, stomping through the grass.”

But folk influences would loom large for Kottke once he focused on the guitar. He was only 17 when he discovered The Bitter and the Sweet, a live album by folk hero Pete Seeger. On parts of that record, Seeger played the rich and complex-sound 12-string guitar. “And I found another recording of his, ‘Bells of Rhymney,’” Kottke says. “The downward progression that he does, that got to me, too.” He decided he would get a 12-string for himself, “to see what I could do with it.”

One of the things Kottke did with it was to record his 1969 debut, 6- and 12-string Guitar. That classic release showcased his dizzyingly precise yet accessible guitar style. Today he says that his lifelong association with the 12-string is a love/hate relationship. “Mostly hate,” he says, half-jokingly. Kottke allows that sitting at home in one’s living room playing a 12-string is quite enjoyable. “But trying to amplify one of those things is very, very tricky. You get tired of trying to solve that riddle.”

In technical terms, Kottke explains that the challenge of amplifying an instrument with so many metal strings creates magnetic issues – “balance problems, ‘wolf tones’” – that make playing a 12-string difficult in a concert setting. He mentions another celebrated instrumentalist, one who has worked with Jackson Browne, Bob Dylan, Bruce Springsteen, Curtis Mayfield, Dolly Parton and a host of others. “David Lindley knows all about this stuff,” Kottke says. “Although he doesn’t play a 12-string; he’s a little smarter than I am.”

Still, for all his good-natured protestations, Leo Kottke still displays his mastery of the 12-string in concerts. Though he hasn’t released an album in more than a decade, the guitarist maintains a busy touring schedule. His easygoing manner and instrumental prowess carry him through those shows. Kottke learned lessons about how to win over an audience very early in his career, when he hitchhiked across the U.S., busking for a living.

Kottke says that his busking years taught him that he “could get away with anything and be a ham. Nobody cares, and you do make a couple of bucks.” As he approaches his half-century mark as a recording artist, Kottke admits that he never envisioned making music a career. “I never thought it would be a job, and I never actually pursued it as a job,” he says. His original plan was to be an English teacher. “I figured it would be great to make a record every now and then, too,” he says. “And it all just kind of happened. It’s been a big surprise how it worked out.”

Come back tomorrow for more from my conversation with Leo Kottke.