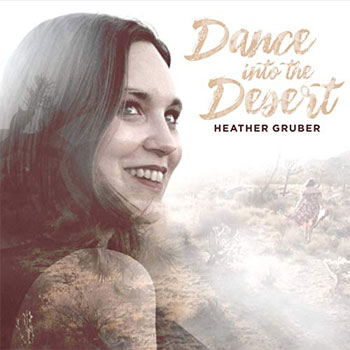 A collection of songs designed to convey a narrative of the artist’s sojourn from East Tennessee to Los Angeles, Dance into the Desert is shimmering pop. Gruber has a lovely voice, and her knack with a winning melody shines through on all of these songs. At one moment she might me trilling along while plucking on a ukulele (“Running on Empty,” not the Jackson Browne tune); elsewhere she’s at the piano, Carole King style, delivering the introspective “Lost My Halo.” Gruber effortlessly flits up and down t scales vocally, but it’s always in service of her songs, not done in any kind of showy, look-what-I-can-do manner. The instrumentation is tasteful and never bland, and each song seems to have been crafted from the bottom up, each with its own warm and inviting character. Even when exploring potentially melancholy subject matter (“What’s So Good About Being Young?”), Gruber’s sunny optimism shines through. Fans of Fiona Apple and Regina Spektor are recommended to seek this out.