Album Review: The Pearcy / Gratzmiller Jazz Quintet – Over the Edge 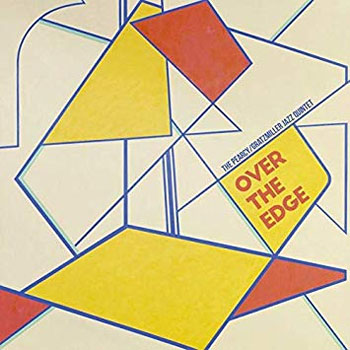 There exist many substyles under the genre umbrella that is jazz. The chosen approach of Boston-based outfit the Pearcy / Gratzmiller Jazz Quintet is hard bob, a style that experienced its heyday in the middle of the 1950s. Leading lights of the style were drummer Art Blakey’s Jazz Messengers, John Coltrane (who admittedly explored other areas as well) and Freddie Hubbard. Even though jazz moved on to other phases, hard bop’s appeal has endured. And to listen to these five players, you’d never know that sixty-plus years have passed. They nail the style’s nuances, interplay and energy. Moreover, as much as jazz has often made highly intelligent and creative use of interpreting existing works, all ten of the tracks on the instrumental set are original compositions. Half are written by trumpeter Wayne Pearcy; the remainder are from the pen of saxophonist and album producer Aaron Gratzmiller. The interplay between the two composer/musicians and the rest of the band – pianist Matt Savage, Greg Toro on bass and drummer Fabio Rojas – is assured deceptively easygoing in character. The five players acts as a single musical organism, without losing their individuality in the process. If you already have your fill of classic-era hard bop LPs – in fact, even if you don’t – Over the Edge is enthusiastically recommended; it will make a fine addition to the collection of any jazz aficionado.