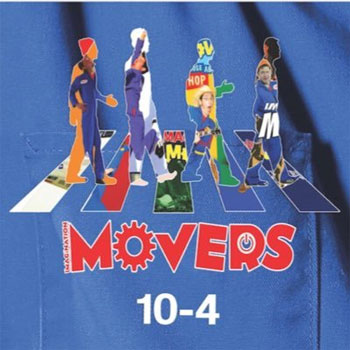 At its worst, kid-oriented music is so sugary that it makes the listener’s teeth hurt. At its best, the genre entertains kids and (admittedly to a lesser extent) adults alike, and bring generations together over shared enjoyment of the musical experience. Imagination Movers lean in the latter direction; their songs are catchy and simple enough to capture the, er, imagination of youngsters, but complex enough both instrumentation-wise and in arrangement to intrigue adult listeners. The subject matter of the 13 songs on 10-4 are age-appropriate, but the music itself hits the sweet spot between simple and sophisticated. Some ace guests make a goo collection even better; Lisa Loeb got her start as a mainstream artist but has developed a parallel career as a kid-focused songwriter and performer; her duet with the group on “Butterfly Wings” is simply charming. A collaboration with hip-hop act The Durbulence (“Two Truck”) is catchy as well; it’s the kid-friendly mirror image of gangsta rap. Throughout 10-4, the group deftly and completely avoids the dreaded twee characteristics that threaten to induce insulin shock in grown-up audiences; there’s nothing here that will annoy adults. In fact, the cheery, uptempo songs are likely to brighten the day of listeners of most any age.