A Few Moments with Aaron Burdett 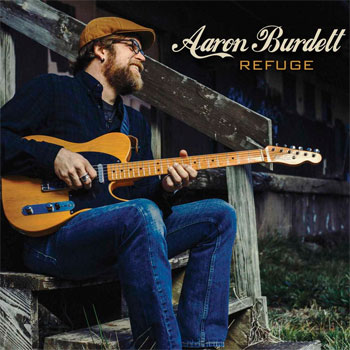 North Carolina-born Aaron Burdett is an award-winning singer-songwriter with an impressive back catalog; he released his first official album in 2005. Burdett’s latest is Refuge, and it explores an even wider musical landscape than his previous efforts, with elements of folk, rock and even classic country.

Do you research when you’re writing songs with a historical element?
I do. It’s a little bit of a challenge to write a song with historical content, because I don’t want it to sound like something you’d hear played when you press a button on a display at a state park. “Pennies on the Tracks” is about the Saluda Grade, just below my hometown. And writing a song about a train puts you on thin ice anyway: straight off the bat, it’s already a cliché. You need to be really careful with that sort of thing, so I did some research to get the facts right. As they say, every good lie has a little bit of truth in it.

Do you consciously aim for a specific style on a given song, or do the songs sort of “tell” you how they should sound?
I argued with “It’s a Living” for a long time, because I didn’t want to write what felt like a country song. I kept trying to play it as something else, some other kind of song. I don’t know … a reggae song, a rock song, something different. But eventually I realized, “You know what? It is a country song! Let me just embrace it!” And I did.

What’s the biggest challenge you face as a nearly full-time musician who also holds down a day job?
It might be dealing with unlimited opportunities to be discouraged and quit. It’s not an easy road when you want to be a professional touring musician; there are lots of complications, unless you’re a single 25 year old kid with no responsibilities. For me, that was 20 years ago, so that guy is gone. If you’re looking for external forces to tell you that you’re supposed to be playing music, it’s not going to work out. Performing and making music really balances me out in a way nothing else does; I have to do it.

In some ways it would be a lot easier if I said, “No, I don’t want to do this anymore. I just want to work a day job.” But I don’t think I could live with myself. And I don’t think anybody else would want to live with me!

As a musician, what’s the most important lesson you’ve learned along the way?
I’ve heard somebody say that making music is like driving in fog: you can only see so far. You see 100 feet, and you go 100 feet. But then you can see another 100 feet. So even if you can’t see all the way, if you follow your guidance, eventually you’ll get where you’re supposed to be.