Listen to This: The Zuider Zee Story (Part 1)

(An edited version of this story appeared previously in Goldmine.)

In 1975, a Memphis-based band called Zuider Zee recorded an album for Columbia Records. The melodic, power pop-leaning collection of songs was released, and it didn’t sell. Zuider Zee never made another album. But that wasn’t the end of the story. In fact it was really only the second chapter in the group’s history. The first has gone largely unexamined, unreported, unknown … until now. On June 8, Light in the Attic released Zeenith, a previously-unheard collection of songs from Zuider Zee, recordings that are closer in sound and spirit to the band’s original intention than the major-label album that withered on the vine back in ‘75.

First of all, Zuider Zee wasn’t really a Memphis band. Hearing that Columbia album today (assuming you can find it; it’s long out of print, used copies are scarce, and to date there’s been no CD reissue) modern-day listeners might detect a faint stylistic similarity to Jigsaw or the Hudson Brothers. Lead singer (and songwriter and guitarist) Richard Orange’s voice sounds a bit like Van Duren. But Zuider Zee was actually from Lafayette, Louisiana; the band relocated to Memphis only at the behest of its manager. And in their time in the Bluff City, the members of Zuider Zee never heard – much less had any interaction with – Big Star or the other bands now thought of as part of that scene. 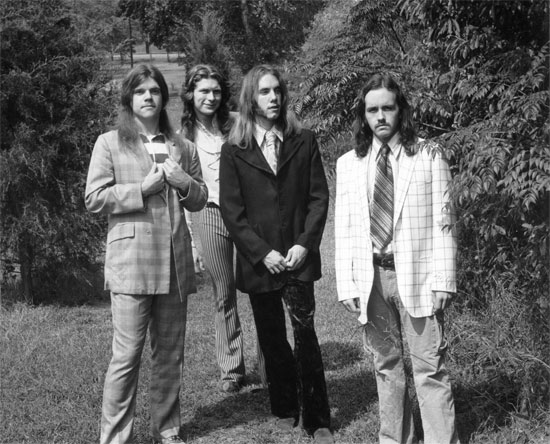 Quite a While
The band’s story reaches back to the Summer of Love, when its members were still in high school. “I used to record vacuums,” says Richard Orange with a warm chuckle. “Blowing bubbles in the water and things like that. I wasn’t even of legal age then.” In addition to making experimental recordings, Orange was also writing original material, and he soon put a band together.

“We had a group called Thomas Edisun’s Lightbulb Band,” says drummer Gary Simon Bertrand. “Richard and myself were the founders of that group.” The band released a single, “No One’s Been Here for Weeks.” Once Orange and Bertrand finished high school, manager Leland Russell offered the band a regular weekend spot at a club he owned.

Eventually, Russell started Alpha, a professional light and sound company, and moved to Memphis in hope of drumming up business there. By that point, the band Richard Orange led (still with Bertrand as drummer, plus bassist John Bonar and keyboardist Kim Foreman) was called Zuider Zee. As Russell began booking the band throughout the southeast, he decided it would make more sense to have the group use Memphis as its base of operations. His ultimate goal, Bertrand says, was for Zuider Zee to score a record deal and then “use Alpha as our main sound system and lighting company as we progressed with our success.”

Zuider Zee’s live set at the time featured a mix of Orange originals and like-minded covers. Bertrand recalls that some of the latter included tunes by Wings and Badfinger. A rough bootleg cassette recording of the band playing at a club called Jail West also features Orange’s original songs “After the Shine’s Gone,” “Might Be I’m Losing My Mind” and “Night Light.” Curiously – or perhaps not so – none of those songs would be recorded for the band’s sole release on Columbia.

All That Is
Those three songs – along with at least nine others – were in fact professionally recorded by Zuider Zee some months before the group signed with CBS/Columbia. Working at TMI Studio in Memphis with engineer Jerry Williams, Zuider Zee dropped into the studio whenever schedules allowed, putting down an album’s worth of material between 1972 and January 1974. Orange and Russell co-produced the sessions.

Recorded not as an album but instead for demonstration purposes, the Zeenith tapes nonetheless sound finished. They present Zuider Zee in a less slick style than found on the later Columbia LP. The band rehearsed relentlessly before entering the studio to cut the demo tracks, and that unity of purpose shines through on the recordings; it’s as honest a document of the group’s live sound as could be hoped for. “That’s the simplicity you hear on Zeenith,” Bertrand says with pride.

“Richard was such a prolific writer,” Bertrand says, “that we had all these new songs. So instead of going back to finish [the Zeenith tapes], the group went on to playing the newer songs. And those were what was recorded with CBS.” The version of “Haunter of the Darkness” that appears on the major-label LP is a remix of a recording from those earlier sessions, made at a time when Bertrand was still in the group.

Just before getting the CBS deal, Zuider Zee had again been working out of Lafayette; Russell had instructed them to stay put rather than return to Memphis. “I was just adamant about not doing that,” Bertrand recalls. “And that’s when I just blurted the words out: ‘I quit.’” Before he could reconsider, the band had replaced him. He went on to play drums with G.G. Shinn and the T.S.C. Trucking Company. Bertrand would later sit in with Zuider Zee on a temporary basis, but never again as a full member.