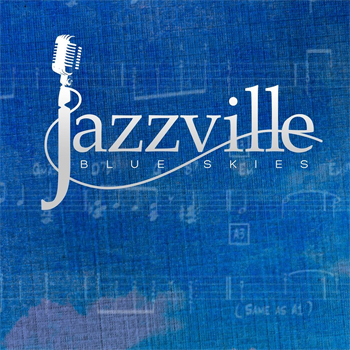 Jazz is one of the few musical idioms in which artists can record and/or perform the compositions of others and still gain widespread critical acclaim. The form itself is designed to allow — and perhaps even demand — a fresh and original approach to existing material. Against that backdrop, Blue Skies, the debut release from Jazzville, is a successful exploration of familiar jazz standards.

A classic jazz instrumental lineup supports vocalist Bronwyn Cronin on most of Blue Skies’ nine tracks. Each of that trio of musicians is well-known in the Asheville music scene: drummer Bill Berg, Patrick Boland on piano and bassist Zack Page on bass. (Cellist Franklin Keel and guitarist Dan Keller make important contributions to selected tracks.) Even more well-known are the songs chosen for the album.

The title number was written by Irving Berlin nearly a century ago, and has been recorded by more than 100 artists; Ella Fitzgerald’s 1958 reading is among the most celebrated. Cronin’s crystalline vocal enunciation and effortless vibe convey the upbeat sentiment of the tune, and Boland’s lyrical piano runs suit the bright vibe of the arrangement.

Another Berlin tune, “Isn’t This a Lovely Day?” from 1935 was originally written for the Fred Astaire and Ginger Rogers vehicle Top Hat. The song’s gentle swing/shuffle feel is playful, subtly sexy and delightfully melodic. Page’s understated bass simultaneously anchors the song and moves it along.

With a reading of Johnny Mercer and Hoagy Carmichael’s 1941 “Skylark,” Jazzville turns to another page of the Great American Songbook. The torchy tune features nice brush work from Berg, and a soaring yet tastefully restrained Cronin vocal.

“Autumn Leaves” is among the most well-known of the standards on Blue Skies; Jazzville wisely imbues its arrangement with a solid dose of individual character. Instead of sticking to one style throughout the song, the band changes things up a bit. The musicians charge along as Cronin scats, trading licks with Boland’s upper-register piano licks. Boland and Page each slip in a brief solo of their own.

First recorded by Sarah Vaughan, “Tenderly” has been performed in a variety of styles since its 1946 debut; Jazzville digs into the song’s emotional content, with Keel’s bowed cello taking over the low register. Keller’s subtle guitar work makes its first appearance on the album, while Berg sits this one out.

The band applies a bossa nova feel to George Gershwin’s immortal “Summertime.” Originally composed for the 1935 opera Porgy and Bess, the song is taken far from its roots by the Asheville-based jazz combo. Cronin luxuriates in the song’s lyrics; her brief scat vocal near the end of the song feels natural, improvised on the spot.

Guitar and cello support Cronin’s voice on the melancholy “Smile,” a tune originally composed as an instrumental in 1936 by Charlie Chaplin for his film Modern Times (lyrics were written nearly two decades later). The heartbreaking melody provides a delightful showcase for Cronin’s voice, and the arrangement features some extremely subtle multi-tracking of her vocal.

Jazzville departs from Blue Skies’ American Songbook theme for its reading of Johnny Nash’s 1971 pop-reggae hit “I Can See Clearly Now.” With some understated hand percussion and Page’s supple bass line, the tune fits seamlessly into the collection of standards. Cronin takes the opportunity to hold the occasional sustained note, and scats extensively in the place where an instrumental solo might typically appear.

Blue Skies closes with a return to the Songbook: Eden Abhez’s 1948 song “Nature Boy,” first recorded by Nat King Cole. The showy melody serves here as a vehicle for Cronin to showcase her supple vocal range. The full band enters more than a minute into the song, delivering a lovely instrumental performance centering on Boland’s piano. As the tune approaches its end, the piano-and-vocal arrangement returns, dissolving in some tasty filigree.