Carol Rifkin: What is Mountain Music? 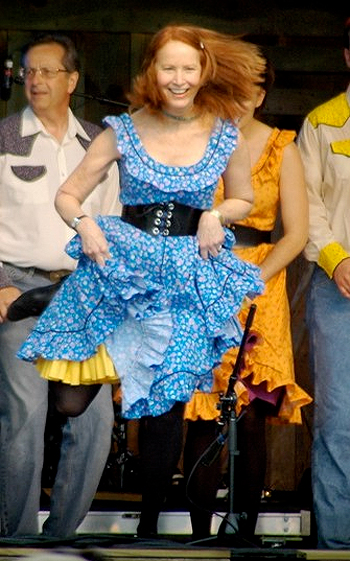 Carol Rifkin is an expert on mountain music. She sings and plays it, she writes about it, and she’s the host of the popular This Old Porch radio program. But when asked to define mountain music, she’s uncharacteristically caught off guard. “There really isn’t a real straight answer,” she says with a good-natured laugh. “I have a friend who used to say, ‘Mountain music is playing whatever you like on string band instruments.’” Pressed to explain the difference between that style and bluegrass, she has a ready answer. “Today,” she explains, “the main thing that defines the difference is the banjo style.” But then she hedges a bit: “But that gets complicated too. Each area has its own style, and to outsiders they might all sound the same. But to us, they’re completely different.”

Handy definitions notwithstanding, Rifkin knows her stuff. And she’s one of the most high-profile figures in Western North Carolina and beyond, working to keep mountain music thriving. She believes that the fact that mountain music is such a slippery concept may be part of why it’s as vital as ever today. “I’m not a ‘definer,’ so much,” she says. “A lot of people want to say, ‘This is exactly what it is,’ but I don’t want to be that defined. ‘Mountain music’ is a forgiving term, because everybody doesn’t have to play the exact same way.”

For some time now, Rifkin has co-hosted a weekly music jam at Bold Rock Hard Cider. “The purpose of that is to create a community, and just really get more people in Mills River and Henderson County playing together,” she says. That sense of community is strong: Rifkin says that the little daughters of co-host John Mitchell “will be jumping on and off his lap while he’s playing the fiddle.”

She explains that the jam is based on a traditional mountain music concept. “The best players sit in the center. If you’re not one of the best players, you sit around the outside of the circle.” And everyone takes a turns calling the tune. “It’s not just me saying, ‘Let’s play this,’” Rifkin says. “Having to play tunes that other people pick forces you to learn new things. It makes you get out of your comfort zone.” But the fundamental value is fostering connections. “It’s a social evening as well as a musical evening,” says Rifkin. And plans call to expand the jam’s scope. “It’s wide open for all the things that you can get going once you have a whole community of people working together,” she says.

Carol Rifkin has written and published more than a thousand stories and features about mountain music; she writes regularly for Acoustic Guitar, Sing Out! and a host of other publications. And while there are similarities between the profiles she pens on music personalities and the rich storytelling tradition of mountain music, she cautions that the comparison can only be taken so far. “In mountain storytelling, you have a lot more room to spin a yarn,” Rifkin says.

Doing that in a story might get a features writer in trouble, she notes. “You can’t embellish facts, but I do take great pleasure in embellishing emotions in the stories I write. And I think in many ways that’s what we love – and why we connect – with mountain storytelling: there’s a sentimentality and a very basic, human folk nature to the music.”

That down-home folk quality shines through when Rifkin sings and plays. Her list of performance and recording credits is quite long, including work with Bailey Mountain Ramblers, Blue Ridge Serenaders, Carolina Old Timers, Green Grass Cloggers, Horseshoe Hotshots, Paul’s Creek, Wild Goose Chasers and many others. For this year’s Mountain State Fair, she’s teaming up with friends and musical associates Jeannette and Mark Queen.

Jeannette is a daughter of acclaimed old-time music figures Claude and Mary Jane Queen; she sings and plays guitar. Her multi-instrumentalist nephew Mark will play clawhammer banjo; while Carol plays a number of instruments herself, for these shows she’ll feature on fiddle. “We’ll do some harmony singing,” Rifkin says. “We love to sing.” The set will include both original material and songs Rifkin learned long ago from people in the mountains.

Toward the end of our chat, Rifkin returns to the what-is-mountain-music topic. “Some people get together and play baseball to have a good time together,” she says. “What mountain music is to me is this: we get together and we play music for fun.”