Casual American fans may be unfamiliar with Simple Minds beyond “(Don’t You) Forget About Me” and the handful of other stateside hits by the Scottish group. But the band led by singer-songwriter Jim Kerr has enjoyed consistent international success from the early ‘80s to present day. In support of the band’s latest album Walk Between Worlds, Simple Minds embarks on its first North American tour in almost two decades.

Bill Kopp: Simple Minds has a massive catalog; aside from the obvious constant you being on all of them, what do you see as the unifying characteristics of the band’s music from the late ‘70s to present day? 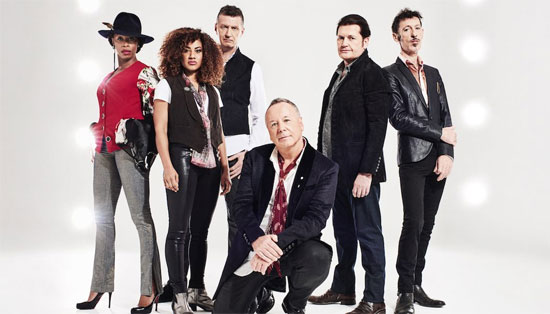 Jim Kerr: The songs on the first album were written when we were seventeen year old kids. We’re now pushing on sixty. So, one would say there’s a lot of difference there. And I would hope there is, because it’s been an amazing life and it’s been a life shaped by all manner of things that this band has brought to us. And yet, inherently, I still think there are a lot of links to those kids and to the people that we were then, in the same way that your DNA never really changes. Where I am in Glasgow now is a couple of miles from the school that Charlie Burchill, my songwriting partner, and I went to. So, geographically, we circumnavigate the globe, but all of us come back. The landscape of the journey will have changed dramatically as the years roll past, but it’s still that same journey.

While several members of the group have stayed with Simple Minds for very long periods of time, the band has gone through its fair amount of turnover; some members have left and returned. Do you see those personnel changes as something that has slowed the group’s momentum, or have they represented opportunities to pursue new directions?

Well, I think both. Sometimes the changes, when they came—especially when we were younger—were kind of traumatic. Because when people made some of these big decisions, I think now, “Wow. If we’d had a week’s break and had the conversation a week later, there would have been a different outcome.” But when you’re young, and you’re feisty, and especially back then, it was young guys. There’s always a bit of a power struggle; all that stuff that you don’t really know is going on, but it goes on. And so I’ll give them the benefit of hindsight. Problems that maybe had arisen, you could have sorted out. But they weren’t. So, they could have been traumatic.

However, alternatively, it does feel great sometimes when you feel great, charged, re-energized. I mean, 40 years is a heck of a long time. Even 10 years is a heck of a long time; who works with the same people for 10 years? Very few. We put the myth on bands, who especially back then were invariably male. You look at them a, “They’re carved in stone. They’re the original guys,” and all that stuff, but the idea that they’re going to go on for … I mean, the Beatles couldn’t even hack it for 10 years. It’s intense. So, there are pros and cons.

In the very early days of Simple Minds, you played keyboards with the group …

Yeah. Sort of by stealth, they kind of moved the keyboard away from me; they thought that I would be maybe better out front and leaving [keyboards] to someone who knew what they were doing!

Was that transition to being the front man difficult, or did it come naturally to you?

That’s something that I often think about. Going back to the years before I was in the band … the journey that I’d been on personally is not that well-documented, but in my junior years of school, I had a really bad stammer. I wasn’t quite a wallflower, but I was the last person you would think would stand up in front of a class. I did when the teachers made me—and they did make me—to read out. But I would rather than have done that. So, the idea that I would become a show off—or a front anything— is a bit beyond the pale when you think about it. But I’m amazed at how many fronting performers do come from something incredibly shy; they’re just the last people you would think to get out there and front something up. But that’s the way it happens.

Are there ever times today when you wish you could fade into the lineup and let somebody else be out front?

There was a period where I thought that. Because, as well as being the front man, that’s not just onstage. Invariably, you end up doing all of the media, the press, and all that. And as a kid, even meeting record company people, industry people … all that’s a bit of a talent on its own. Because it’s got to be done. And if it’s got to be done, you’ve got to presume it’s got to be done well. And at one point, I did see myself balking and thinking, “This is a bit beyond me.” But I’d like to think that you grow into it.

The whole manner in which music is made has changed dramatically since the early days of the band. At what point did you begin to embrace the more modern and digital methods of recording?

Pretty much when the technology arrived, when the gear arrived. One of the fractures in our band was caused by the guitar player suddenly being able to get a sequencer going, and come in with fully-fledged demos. And then the keyboard player would be like, “Hang on a minute. That’s what I do,” and I would be in the middle of them saying, “I don’t care who does what, as long as it sounds great.” We’re talking about mid-80s, around then. Once the sequencers and the digital stuff became available at a moderate price, then like many people, we embraced it.

Across your career, and especially even listening to the very latest album, the music features a mix of programming and “real” instruments. Do you think it’s important to keep real instruments in the mix?

There are no rules, to be honest. When we go on the road, we also run some [programmed] stuff, but the band’s got to be playing. Because we love great bands and we love the dynamics. But strangely enough—and it is strange—we’ll sometimes go through the circle. We’ll go, “Right. Let’s just do it with the band. Let’s get the band in it, and it will sound great because it will be fresh. So let’s park all the technology.” And so, you’re playing and you go, “This is great, this is great,” and then, after a few days, you’re going, “Yeah, it just sounds like a band. What are we going to do about it?” And so, we get this sort of hybrid thing going.

There’s nothing better than when we’ve got a great drummer or when the guitar player is letting go. But at the same time, it’s great to run the atmospherics, and play off stuff. So, I think Simple Minds is very much somewhere in-between there.