Victory Boyd was “discovered” busking Stevie Wonder songs on the streets and in the subway stations of New York City, and that discovery led to a recording contract not only for her, but for her entire family including her father and eight siblings. The singer-songwriter was a featured performer at the fourth annual LEAF Downtown AVL Festival in Asheville. N.C., August 3 and 4.

Boyd had been part of her father’s Boys & Girls Choir of Detroit since she was 4 years old. The family eventually moved to New York City where they continued to perform. One of the group’s regular “venues” was in the underground stations of the city’s subway system. It was there that Boyd — already a seasoned vocalist — developed her performing chops. “As a busker, you performer for a lot of people,” Boyd says. “And a lot of them don’t give you the time of day. So you have to build confidence and believe that your art form is still valuable.” 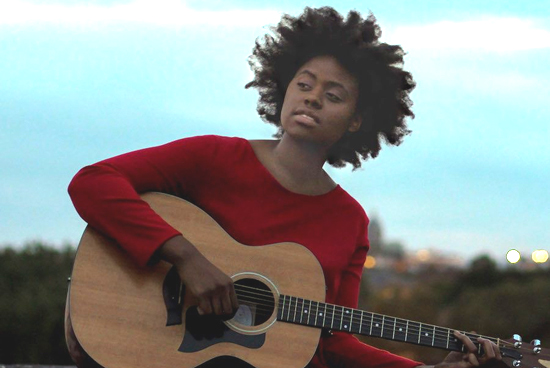 Boyd succeeded on that score. She says that her experience as a busker was valuable. “It’s rewarding when you see that at the end of the day, maybe twenty people had a really impactful experience from your performance,” she says. “You don’t feel entitled to their applause; you’re grateful for it. And that translates a lot into this next phase of the music industry where I’m on major stages.”

Boyd started playing guitar when she was 15, quickly developing her proficiency and writing original songs. She describes her style as “two genres: folk and jazz mixed together. The storytelling component combined with acoustic guitar is folksy, but I play a lot of jazz chords and use soul phrasings,” she says.

The musician received her first big break after a music documentary featured her busking in Central Park, playing a reading of the Nina Simone version of “Feeling Good.” The filmed performance attracted the attention of a music industry figure who in turn raved about it to his friend Jay-Z. “He was impressed with the video and requested to meet me,” Boyd recalls. “So me and my dad and all of my siblings went over to Roc Nation to meet him.”

Jay-Z signed the whole family to a recording contract. “That was ten years after we started busking in Central Park almost every day,” says Boyd. “It was a long journey, and it’s not over; this just feels like a new chapter.”

In June, Boyd released her first full-length album, The Broken Instrument. The songs are based around the musician’s voice and acoustic guitar, but rich, deeply textured string arrangements — many by Boyd herself — give the album a sophisticated sheen. But Boyd’s busking roots are still key to her work. Speaking in late July about the title track of her new album, she admits, “I just performed it for the first time on stage at my album release party … two nights ago.”