Fantastic Negrito: We Can Turn It Around (Part 3)

The production on The Last Days of Oakland is “boxy,” and Xavier says that that quality is a deliberate aesthetic choice. “I wanted it to feel like I’m sitting right in someone’s living room,” he says. And I tried to minimize production; I was really going for a sense of urgency, immediacy, right now.” He sums up his mindset: “I try to do less, do smaller, and do it right there where it’s happening.” 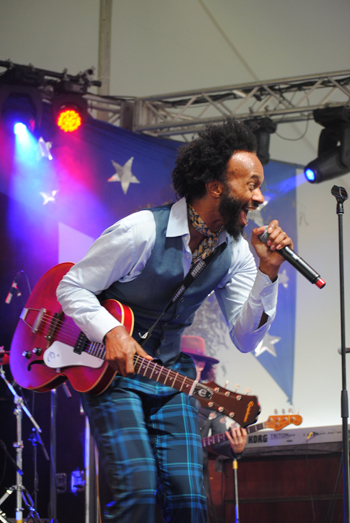 In our 2016 conversation, Xavier was already thinking about his next Fantastic Negrito album. “I’ve been writing quite a bit,” he told me. “And I had an idea: I really want to resolve a lot of things with my Dad. I ran away at 12 and I never saw him again; he passed away when I was in foster care.” Xavier’s idea at that time was to create an album around themes of unresolved father-and-son issues.

But in the year that followed, he spent a great deal of time on the road and in front of concert audiences. By the time late summer 2017 rolled around – and with studio time booked for December – Xavier’s thinking had changed a great deal. “I’m a coward,” he explained in October. “I abandoned that. It’s too much; I just wasn’t ready for it. Maybe someday.”

Still, and paradoxically, adopting the persona of Fantastic Negrito has empowered Xavier Dhprepaulezz to reveal more of himself. While his X Factor era music is enjoyable, there is – at least in relative terms – a shallowness and superficiality to it. But leaving his given name behind and taking on a stage name (one filled with a boastful, hype-filled hip-hop attitude) frees him to dig deeper emotionally and to deliver in a more heartfelt and meaningful way. Stage name be damned, that lack of artifice is key to his connection with his audiences, both onstage and on record.

But it’s always wrapped in an invented persona. Asked if he has ever once regretted creating Fantastic Negrito,” he responds with a quick and emphatic no. “I don’t like Xavier,” he says. “I like the incarnations. I like Fantastic Negrito, Chocolate Butterfly, Blood Sugar X; I like all these people.” But the invented incarnations do connect with audiences. “There’s a reason that Chris Cornell took me out on tour three times, Sturgill Simpson takes me out,” he says. “They get it. Songs are connectivity.”

So who is this man when he’s not writing, performing or recording? “Then, I’m not Fantastic Negrito,” he says. “People see me on the street – I could be with my kid or something – and ask, ‘Are you Fantastic Negrito?’ And I go, ‘Not now. That’s that other dude. He’s a lot to deal with.’” In those situations, he says he wants to be “a civilian. It’s like Spider Man’s Peter Parker; that’s how I feel.”

As he entered the studio in December 2017, a theme had coalesced around his new material, some of which he had previewed onstage at LEAF a few months earlier. He says that two of those songs, “Plastic Hamburgers” and “The Duffler” explore his current thinking. “They just seem about humanity,” he explains. “The unnamed people. Lyrically they seem about people that I know, neighborhoods that I grew up in, filled with interesting characters. Flawed people.” He cites a Buddhist concept, “The philosophy of desire being the road to misery: wanting things we don’t have.”

By the time of the December sessions, the upcoming album – released June 15, 2018 – had a provisional title: Please Don’t Be Dead. The title refers not to a particular person but to the American dream. Xavier expresses his hope that the things he values will survive this era: “this normalcy, this country that we built, this way of life that we built, this happiness that we built, communication.” 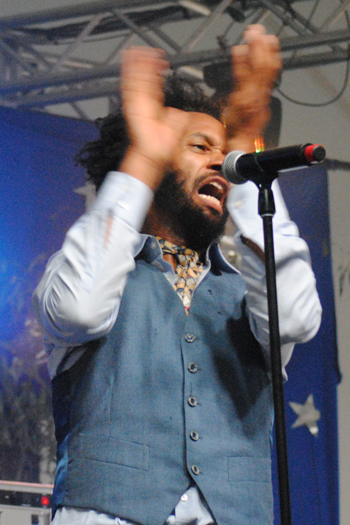 “There’s so much that’s going on in the world,” Xavier says. “I think there’s a responsibility in the job – for me, especially as an artist – that you do something compelling and interesting.” And as the ironic ancient Chinese blessing portends, we do indeed live in interesting times. Xavier believes that Americans “voted into office extremely dangerous right wing people who fan the flames of intolerance, hatred, and bigotry.”

As the subject of flawed personalities colors our conversation, Xavier mentions one in particular; the current resident of the White House. “The cast of characters we have leading us now are severely flawed people, in terms of character and their personalities,” he says. “The presidency of Trump is interesting from an artist’s perspective. I mean, everyday you wake up and you’re like, ‘What’s this guy doing?’ It’s shocking. And now we’re to the point where we realize, ‘Whatever it is, tomorrow’s gonna be some other shit that’s even more bizarre!’ He’s the attacker. Attacks everybody. It’s just amazing how many fires this guy’s started.”

He continues, revealing a curious kind of empathy with Trump. “We put our fate and all this power in the hands of somebody so flawed, and he flaunts it. He’s definitely a reflection of a lot of us, a lot of people I know. He’s interesting; I’ll give him that. He’s a reality star. And he’s always in my head, because I recognize that person. Maybe I’ve been that person, that extreme narcissist.” Pausing, he adds, “a lot of people would say, ‘Yes, you have been that guy.’”

Xavier also mentions the hubris he sees in a figure like disgraced Hollywood mogul Harvey Weinstein. “There’s a sense of arrogance that must go along with every single person you come across; you’re gonna keep making the same mistake, because there’s this power thing going on. That arrogance is something I see in people in my neighborhood, too.”