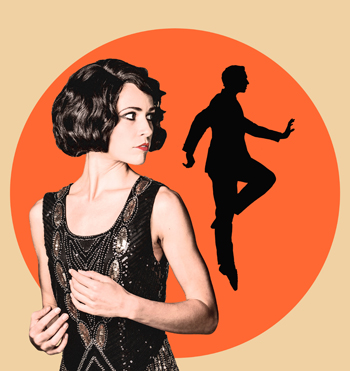 While researching for a new ballet about Zelda and Scott Fitzgerald — the sometimes-Asheville-based writer and artist couple who, in many ways personified the jazz age — Heather Maloy experienced a realization. “Scott was horrible to Zelda in a lot of ways. But he was way more supportive than most men would have been.” As she dug deeper, Maloy came to a provocative conclusion. “The #metoo movement has latched onto Zelda as this sort of victim,” she acknowledges. “But I don’t see her as quite the victim she’s often portrayed as.”

The dance piece resulting from that study, “In Zelda’s Words” was choreographed by Maloy, who launched the contemporary ballet company Terpsicorps in Asheville 15 years ago. The June 2018 remiere of the performance, based on the complicated, nuanced and ultimately tragic relationship between the Fitzgeralds, featured the Terpsicorps company dancers joined by the Firecracker Jazz Band.

Zelda Fitzgerald’s obsession with being a dancer was part of what initially drew Maloy to her as a subject. “Scott and and Zelda were household names for me growing up,” she says. But the ballet’s narrative focuses upon the couple’s relationship. “It’s difficult subject matter to tackle, because there are so many different takes on the story,” Maloy says. “The only source that made sense for me to go to was their actual letters to one another.” That approach informs the character of the dance performance. “It’s as if Zelda was sitting there reading old letters, remembering good times and bad, through the lens of her solitude.”

Maloy summarizes the theme of “In Zelda’s Words” succinctly. “It’s about a tortured – and in some way unrequited – love.”

Terpsicorps’ anniversary season also includes the return staging of past works from the company’s repertory. “Second Line” was created in part to honor John Payne, a fixture of Asheville’s River Arts District who passed away in 2018. Payne was a sculptor, owner of the Wedge Building and and a passionate supporter of Maloy’s company. “I created ‘Second Line’ right after Hurricane Katrina,” Maloy says. “It’s about how New Orleans put itself back together through music; that was the one thing that never stopped, and it’s the bond that holds the city together.”

She continues, “‘Second Line’ is what you call a New Orleans jazz funeral.” Just as she began work on creating the piece, she learned that Payne had died. “I walked into the room to start this piece, knowing that one of my very best friends had just passed away, and I was choreographing a funeral.”

The company’s 2018 season also includes “Le Suil Go…” a work created by Maloy in 2003 for the Nashville Ballet, and “Afternoon of a Faun,” choreographed by Salvatore Aiello, late director of the North Carolina Dance Theater. The season showcases the efforts of Maloy and her company, a somewhat unlikely success story.

Prior to her 2003 move to Asheville, Maloy worked for 13 years with the NCDT (now known as Charlotte Ballet), and had choreographed a number of performances. “I kept getting this advice from people that I should start a company,” she says. Maloy knew she wanted to stay in N.C., and considered several locales. “With Asheville being the artistic and open-minded community that it is, it seemed like a really good fit,” she says. 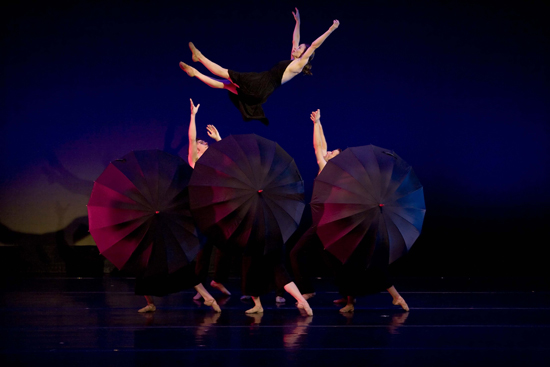 Starting the new dance company wasn’t as easy as Maloy had hoped. “I was a little naive in what it was going to take,” she admits with a self-effacing laugh. “I literally moved here in mid-April, and I was like, ‘Hello, everyone. Here I am. Give me lots of money.’”

Maloy organized a premiere event at The Orange Peel; the performance was sparsely attended. After the second act, she took the stage and addressed the crowd. “I said, ‘Are you enjoying what you’re seeing?’ And there was riotous applause, people standing up,” she recalls. “I said, ‘We need your money, and we need it now. Because these people came here from elsewhere to put on this show; I have to pay them. And we’re supposed to do another show later in the summer; we can’t if we don’t get your help.’”

Those in attendance voted with their wallets. “We raised enough money that night to pay the dancers for both sets of shows,” Maloy says. “It was pretty amazing.”

As Terpsicorps’ artistic director, Maloy soon discovered that fundraising is a serious challenge. “When I began working on it, I didn’t even know how to use a computer.” She persisted, and in fairly short order Terpsicorps established itself with an annual summer season of performances. The company briefly expanded to Winston-Salem; unfortunately, that venture coincided with the recession that began in 2007.

The contemporary dance company made it through that difficult period, and today Maloy focuses on the creative side. Managing director Estelle Woodward Arnal handles the business end. “Heather is really a part of the cultural community here,” Arnal says. “And that community has really lifted her up and helped keep the work going. You don’t find that everywhere.” She adds that the company’s long-term plans call for a year-round schedule, including performances in Winston-Salem.

For now, Terpsicorps’ current season renews the company’s ventures outside of Asheville, with performances in Waynesville and Brevard. And the Asheville staging of “In Zelda’s Words” rekindles a decade-long creative relationship with Firecracker Jazz Band, illustrating the company’s collaborative approach.

Maloy readily admits that creating “In Zelda’s Words” on her own was a challenge. “It’s a complicated story, and the more I got into it, the more complicated it became,” she says. “Bringing outside energies into the work is inspiring for me,” Maloy says. “It makes it more interesting and gives a greater depth to the work. And it inspires more people to want to come see the show.”