Album Review: The League of One – Dispatch 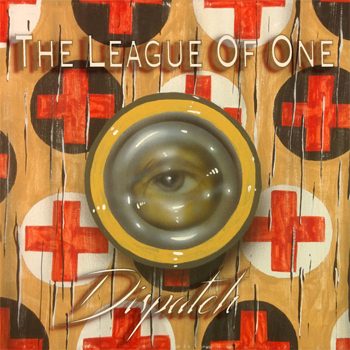 Drawing from ‘70s sludge metal (Black Sabbath) ‘80’s hair bands (pick any one; they’re pretty well interchangeable) and modern-day speed metal, The League of one makes the kind of hard rock that – whether you like it or not – has largely gone out of fashion these days.

And that shift in popular taste is unfortunate. The songs on Dispatch are sold riff rockers. Singer and guitarist Will Maeder has a vocal style that reminds one a bit of Blue Öyster Cult’s Erc Bloom. The band’s taut riffage sticks close to standard-issue melodic metal, but ever so often the songs (like the opening track “Wax Museum” flash a break reminiscent of the twisting, virtuosic prog-metal of Deadwing-era Porcupine Tree.

And that prog-metal sensibility surfaces often on Dispatch. “Plastic Crackhead” alternates between stoner vibe and menacing, punishing (in a good way!) riffing. The group avoids the arena-rock production aesthetic, instead delivering its songs in a close-up, intimate fashion that doesn’t cloak the vocals and instrumentation in blemish-hiding effects. And there’s nothing to hide; these guys can play stoner rock one minute, and then fire on all cylinders with blazing solos the next. Drummer Billy Grant and bassist “The Rev” shift gears effortlessly between styles, and The League of One has enough nuance – a rare quality in this particular musical territory – to expertly explore more than one musical idea within the confines of its relatively compact songs.