Micky Dolenz is Still a Believer 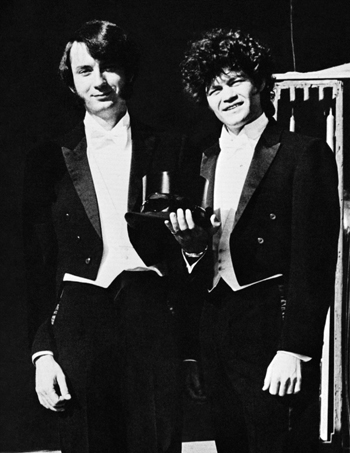 The original lineup of pop sensation the Monkees lasted for a brief period: the quartet that scored number-one hits with “Last Train to Clarksville,” “I’m a Believer” and “Daydream Believer” was together from fall 1965 to very early 1969. In the nearly 50 years since then, there have been several reunions among the group; Micky Dolenz, Davy Jones, Michael Nesmith and Peter Tork have reunited in combinations of two, three and (occasionally) four. But there has been one constant among all of those reunion projects, live shows and recordings: Micky Dolenz.

All four Monkees sang, and Dolenz portrayed the part of the Monkees’ drummer onscreen (and occasionally on recordings and in concert). While he had some professional musical experience prior to being cast on the weekly television comedy, Dolenz’s primary occupation had been as an actor, starring in the late 1950s series Circus Boy. So while some of the Monkees (Nesmith and Tork in particular) had trouble reconciling their musical careers with their onscreen roles, Dolenz never seemed to experience much internal turmoil. “What would I regret”? He asks rhetorically. “It was really successful.”

It’s safe to say Dolenz is a fan of his group. “I’m very, very proud of the work I did – the singing, the acting and the playing – everything,” he says. But the Monkees came in for some critical bashing in the 1960s, with naysayers pointing out that the group was assembled by outsiders (as was Moby Grape) and didn’t play on all of its records (a charge that’s equally true of the Byrds, the Mamas and the Papas and the Beach Boys). Still, time has been kind to the Monkees, and while the group has seemingly been locked out of consideration for induction to the Rock & Roll Hall of Fame, the group’s singles and many of its albums have undergone a reassessment. Many are now viewed as pop classics of their era.

“The Monkees was not a band,” Dolenz emphasizes. “It was a TV show about an imaginary band. The television show took place on this set, which was a beach house in Malibu.” With a chuckle, Dolenz points out that the premise “does raise the question how we could afford a place in Malibu and we’d never done any work.” He likens The Monkees to a Marx Brothers musical, such as 1931’s Monkey Business.

But he emphasizes that from the beginning the foursome worked hard to improve their existing musical skills. “’Johnny B. Goode’ by Chuck Berry was my audition piece for The Monkees,” Dolenz points out. “That’s the song that got me the gig.” In addition to playing all of the drums on the group’s hit 1967 LP Headquarters, Dolenz sang lead on 7 a-sides of the dozen Monkees singles released during the group’s original run.

Davy Jones passed away in 2012, and these days Tork remains busy with his own group, Shoe Suede Blues. But for a select string of dates – less than 20 – Dolenz and Mike Nesmith have joined forces once again, this time for a tour billed as The Monkees Present: The Mike & Micky Show. It’s the first time the two have appeared as a duo, and it represents an opportunity to dig a bit deeper into the Monkees’ catalog. “We do ‘Porpoise Song,’” Dolenz says, referring to a relatively obscure fan favorite written by Carole King and Gerry Goffin for the Monkees’ 1968 psychedelic motion picture film, Head.

“And it’s gonna be great having [Nesmith] singing a lot of his original stuff,” says Dolenz. Of all the former Monkees, it has been Nesmith who has been the most reluctant to record or tour with his former comrades. But by all accounts, both men are looking forward to the tour. “We’re just ready to launch out and do this,” Dolenz says.

Asked what he believes lies at the heart of the Monkees’ enduring appeal, Dolenz says that the group “caught lightning in a bottle. I look at it in a kind of scientific sense: the whole becomes greater than the sum of its parts.”

“It’s like the story about taking the watch apart to see how it works,” says Dolenz. “And of course, then it doesn’t.”