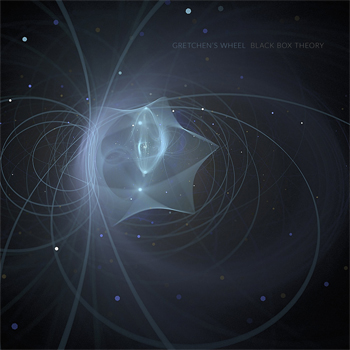 I’ve reviewed releases from Gretchen’s Wheel before. Gretchen’s Wheel is the professional name used by Lindsay Murray for her musical project. Largely a solo affair, Gretchen’s Wheel is Murray’s vehicle for her chiming, exquisitely melodic songwriting and wonderfully tuneful vocals. I’ve had no trouble categorizing previous Gretchen’s Wheel releases as power pop, and I use the term in its most positive sense. Murray’s most recent effort prior to now was a cover of Matthew Sweet’s “Walk Out,” a highlight of the various-artists tribute Altered Sweet. That recording served to reinforce the idea that Gretchen’s Wheel is indeed a power pop act.

But the existence of Black Box Theory, the latest full-length from Murray, places that assertion on shakier ground. Not to say that the tunes aren’t highly appealing; they really are. It’s just that there’s a melancholy vibe that permeates the entire disc, a collection of ten primarily minor-key songs. Longing, regret and doubt are among the emotional textures explored within the grooves of Black Box Theory.

Lindsay Murray’s vocals are perhaps even more sharply developed than before; the creamy ahhh backing vocals are liberally—and pleasingly—applied throughout. The jangly electric guitar finger picking seems ever-so-slightly dialed back compared to previous efforts, but it’s still there, albeit a bit deeper in the mix and harder to find. “Lucid” teases with a tantalizingly brief 12-string solo, for example.

The album as a whole is an impressively realized effort, easily ranking among the best Murray has released to date. And it’s worth noting that melancholy isn’t a previously unexplored emotion for Gretchen’s Wheel. It’s just that in some ways, Black Box Theory is as dark as its cover art: specks of light shimmer through the inky black.

Power pop listeners should most definitely not be put off by signals suggesting Black Box Theory is downbeat; it’s not that at all. Instead it’s perhaps best described as deeply thoughtful, tempering the genre’s sometime predilection for sunny optimism with something a great deal more realistic and grounded. That Murray takes this approach and applies her many melodic gifts to the process is commendable. The hooks are still there to draw listeners in.

Murray earns extra points for releasing the album in a lavish gatefold sleeve, and with eye-popping splatter vinyl.