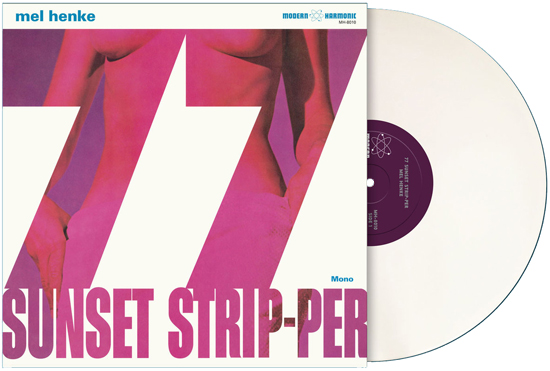 For a lot of Americans in the late 1950s and ‘60s, jazz wasn’t something they went to clubs to hear. If they heard it at all, jazz was often presented in the context of television and film theme music. The brash, hard-swinging sounds of big band jazz lent an exuberant (and wordlessly carefree) vibe to show like 77 Sunset Strip, one of myriad crime dramas of the period.

And in the same way in which studio cats would capitalize on trends – be they monster movies, sci-fi, surfing, stock cars or what-have-you – those working in the jazz idiom sometimes jumped on the exploitation bandwagon. One can take a jaded, uncharitable view of that, or one can take the resulting product for what it was/is. At least in the case of Mel Henke’s 77 Sunset Strip-per, I happily choose the latter path.

Simply put, this stuff is a scream. Think of the cheery, breathless approach of Earle Hagen’s “Dick Van Dyke Theme.” Now add to that a bit of Mad Men-favored spice, some good old-fashioned female objectification. The result might sound a lot like the title track on this collection of Henke’s work.

“Woman in Space” presages Jane Fonda’s Barbarella by several years, yet the playful, giddy spirit that was one dimension of the Atomic Age is in full flower here. Sure, the female voice comes off as more than a bit air-headed and dopey, but it’s all in good fun.

The male voice-over in “Built! (for Comfort)” strikes a tone halfway between word-jazz icon Ken Nordine and pastor John Rydgren’s Silhouette Segments, if Nordine and the good pastor were both leering, middle-aged dudes. The shameless automobile double-entendres come at you faster than a ’62 Ford Galaxie 500 with a 406 c.i.d engine.

And the musicianship is first-rate. Henke knew his craft, and the assembled musicians sink their collective teeth into the material. Listeners looking for nuance had best move along; 77 Sunset Strip-per is up-front in its musical exploration of the era’s hedonism. The man who composed “See the U.S.A. In Your Chevrolet” was clearly having fun with these tunes, and the titles tell the story. “Last Night on the Back Porch,” “It’s so Nice to Have a Man Around the House.” And the covers coax previously-known meaning out of seemingly innocent songs. Who knew that “Open the Door, Richard” was a naughty story. Same for “Farmer John.”

Here’s a challenge: try listening to the songs without smiling. Betcha can’t do it. Pick up the vinyl and keep it handy for your next cocktail party. As liner note writer Brad Bigelow puts it, 77 Sunset Strip-per is “[t]oo slick to be sleazy, too cool to be cheesy, it’s just good, swinging fun.”