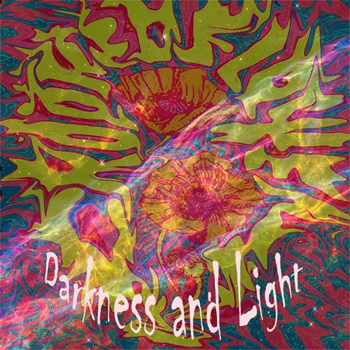 Darkness and Light is a new EP from Berkeley, California quartet Crooked Flower. Released this week, the EP is the latest release from the group who scored both “Song of the Year” and “Concert of the Year” in 2015 on my friend and colleague Mike Lidskin’s influential Twirl Radio.

“Moving On” starts off with a watery effect on the guitars, highly evocative of Led Zeppelin’s “No Quarter.” and as the other instruments come in, there’s a garage rock vibe to the arrangements. So it’s a bit of a surprise for a first-time listener when the vocals of Angelina Dang surface. In both style and delivery, Dang sounds more than a little bit like Stevie Nicks. The minor-key midtempo rocking – which unfolds into a heavy stomper mid-song – contrasts greatly with vocals evocative of the 1970s soft-rock monoliths. Whether that contrast is pleasing is largely a matter of taste.

Crooked flower isn’t a faux Zep outfit; though. The other songs on the Darkness and Light EP showcase a variety of musical textures. And Dang’s voice fits more comfortably into those, but some strange mastering around the one-minute mark of “Tunnel of Light” finds her vocals nearly popping out my speaker tweeters. I was ready to note that such a glitch isn’t the band’s fault, but the notes accompanying the EP list two band members (bassist Daniel Erik and guitarist Dan Ingberman – as producers.

Still, that momentary jarring bit of audio detracts only slightly from a solid tune, one highlighted by some smoky instrumental work. “Boyfriend” dials things way back, for a feel not unlike the rolling Stones’ “Wild Horses,” perhaps if it were covered by prime-era Heart.

The title “Bells of Brixton” might conjure thoughts of the Clash, but this one is a mysterious minor-chord improvisation that unfolds slowly over its nearly twelve minutes. In places, the feel is not unlike the Church, but some oddly tinny synthesizer textures seem out of place. Mid-song, the arrangement heads in a reggae-jam direction reminiscent of Ozric Tentacles; I didn’t see that coming. Near the nine-minute mark, the arrangement washes away to near silence, then slowly builds a return. Towards its end, “Bells of Brixton” sounds like a long lost 1980s new wave rocker. That vibe is reinforced by the return of the dodgy keyboard sound. Some splashy drum fills a la the Police bring the epic-length (but not especially epic-feeling) tune – and the EP – to a close.

Verdict: Not at all bad, Darkness and Light is perhaps an flawed attempt to showcase too much versatility in the space of a four-song EP, and better pruned of its meandering final track. The other three cuts are worthwhile listening.