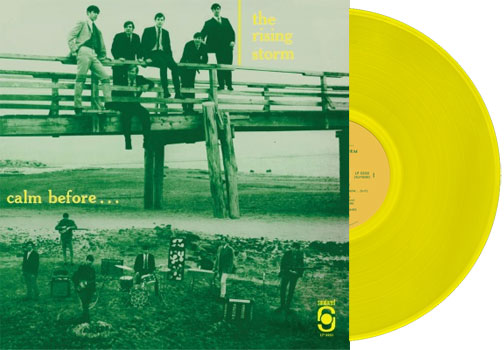 A bunch of prep school boys put together a rock band in 1965. Big deal, right? American teens (mostly but not exclusively males) did that all over the USA in the mid sixties. The influences of the Beatles, the Rolling Stones and the Yardbirds was widespread, and American affluence (for some, at least) meant that instruments and amps were within the budget of many teenagers. And sometimes they made good – even great – music.

Crate diggers have made a fetish of discovering some of those rare recordings. Calling themselves Green Fuz, a band from near Fort Worth Texas cut a song of the same name, often described as a no-fi classic. Copies of that 45 go for top dollar these days. Even rarer is the sole LP from those Andover Academy teens. They called themselves the Rising Storm, and their album Calm Before… is one of the most sought-after obscure LPs of the rock era.

Acclaimed music journalist Richie Unterberger wrote about the Rising Storm and their record in his essential tome, Unknown Legends of Rock ‘n’ Roll. And the record got a legitimate CD reissue in the 1990s. Now in 2018, Sundazed Records has reissued the album again, this time returning it to its native format of vinyl LP.

The most remarkable quality about the album is the band’s impeccable taste in material The songs they chose the record are a fascinating assortment of well-chosen covers and surprisingly strong original material. The record opens with a cover of the Remains’ “Don’t Look Back.” The vocals are a bit smoother than Barry Tashian’s original, but the harmonies are tight, and the instrumentation is pretty top-notch, especially for a bunch of teens. And they play the damn thing fast.

Even the title “To L.N. / Who Doesn’t Know” betrays a kind of coffee-house sophistication, and the moody, folk rock original is musically appealing. “I’m Coming Home” is a simple enough garage rocker, but the arrangement is ambitious by garage-rock standard. And keyboardist Charlie Rockwell is fleet-fingered on his combo organ.

Arthur Lee’s “A Message to Pretty” wasn’t especially well-known on the east coast in 1967, but these students discovered it. The Rising Storm’s reading of the Love classic is a bit subdued and fragile, but perhaps that’s the vibe they were going for. The harmonica solo is pretty solid in a folky way.

We’ll excuse the inclusion of “In the Midnight Hour,” because every band did it back then. To be fair, the Rising Storm does better than average on the Wilson Pickett chestnut.

By far the weirdest tune on Calm Before… is “Frozen Laughter.” Unterberger spends a good bit of time discussing the track in his book. It really has to be heard to be believed. If it sounds like anything else, it’s perhaps a bit reminiscent of early Velvet Underground. The haunting spoken-word clip that opens the track adds a deeply unsettling air, as does the faraway, funereal organ.

Another original, “She Loved Me” shows that the Rising Storm could fuzz-rock as well as any. The vocals on the chorus of “Mr. Wind” are wince-inducing; it’s the weakest track here, but it’s still not a total disaster. “Big Boss Man” opens as a slow blues but shifts gears into what sounds like an upper-class white boy’s rethink of Northern soul…an uncharacteristically good one.

“Bright Lit Blue Skies” is a strong original number with some sunny harmonies applied to a melancholy melody and lyric. And like all of the tunes here, it’s performed with great attention to detail, and admirable musical skill. The last original on the record, “The Rain Falls Down” is a shimmering, moody and contemplative number with reasonably mature lyrics. The record closes with another well-worn tune, “Baby Please Don’t Go.” The band plays it at breakneck speed, as if they were just told that there was two minutes and 48 seconds left on the tape. They make the most of it, and seem to be having a great deal of fun in the process.

The 2018 Sundazed reissue features the recording in glorious mono, housed in a lovely gatefold sleeve (with rare photos inside). And the translucent yellow vinyl is a nice added touch.