Here’s as unlikely a pairing as you’re likely to encounter, even within the context of 1960s pop culture. The Cyrkle were an American pop group whose greatest claims to fame were twofold: one, they recorded and released a single, “Red Rubber Ball,” written by one Paul Simon. Two, they were part of the package of opening acts on the Beatles’ final tour of the U.S.

Perhaps a third notable item should be added to that list (or perhaps not; that’s for you to decide). In 1969 a low-budget X-rated(!) film called The Minx was released to select theaters. The film featured original music by none other than The Cyrkle. Was this a bid for hip cred? Was the band forced to take part in this somewhat cheesy endeavor? Does their music fit at all with the movie? And is the music any good? Questions, questions. 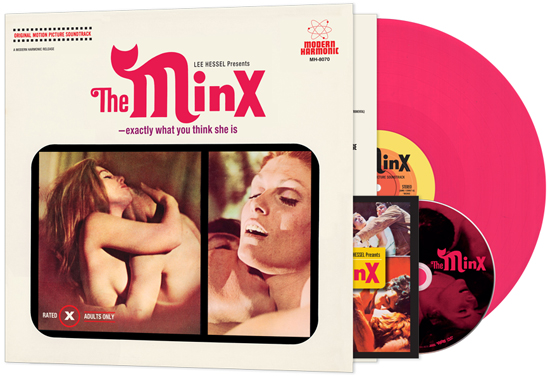 Actually, the tunes are catchy enough, in a light, somewhat inconsequential way. Songs like “Murray the Why” (yes, it’s about whom you think it’s about, though that has not-a-lot to do with the film) are pleasant enough. The lyrics aren’t exactly deathless, but the arrangement is professional, and the vocal charts are lovely.

As with most any film soundtrack, some of the music is little more than filler, a kind of audio wallpaper to help set the scene. “The Minx” (vocal)” is such a tune. And when you spin the LP and hear the twangy, cowboy-flavored “Walter’s Riff,” your imagination will pretty much tell you what’s happening onscreen during the tune. “The Rigging” is little more than the most common of melodies, but it does feature some sorta-interesting keyboard fills.

“The Party” starts off with a riff lifted from Chuck Berry’s “Sweet Little Sixteen,” but quickly heads in a sub-”Theme from A Summer Place” direction. That said, it does feature some nice enough wordless harmonies with a Beach Boys flavor. “Nicole” features some too-earnest-by-half “exotic” trappings: sitar and off-key wooden flute. But it’s kinda cool nonetheless, despite its drone-y vocals. The instrumental track “The Chase” is pretty good in a poor-man’s Mission: Impossible sort of way.

“It’s a Lovely Game, Louise” is standard romantic scene fare, and “The Minx (instrumental)” features some incongruous Herb Alpert-wannabee brass work. But it has a catchy walking bass line. “On the Road” benefits from a catchy melodic line and some tasty electric 12-string guitar. “Something Special” is perhaps the cleverest and most original pop tune on the album, but it’s not strong enough to rescue the relatively faceless character of the music as a whole. Much about the music as a whole feels very “1967,” which makes sense: that’s when the film was shot and the soundtrack was recorded.

Never bad, not at all great but consistently okay-to-good, the Cyrkle’s soundtrack for The Minx is a curio, an artifact of its era. Andrew Sandoval’s liner notes are very on-the-nose when he writes “…by the time the X-rated version of The Minx finally hit screens in late 1969, the film had been in the can almost as long as the band’s chart career.”

One track on The Minx may come as a bit of a shock to aficionados of 1960 popsike, British edition. A beautifully orchestrated instrumental, “Kites” is actually a cover. The best and most well-known version of the tune is the 1967 recording by Simon Dupree and the Big Sound, a group whose members would go on to form Gentle Giant. The Minx‘s version of “Kites” is without a doubt the highlight of the entire package.

The new vinyl reissue is lovingly put together, perhaps affording more care and creativity than its contents deserve. A gatefold sleeve features lots of photos (none all too racy; sorry), and the record itself is – wait for it – hot pink.

Oh, and the film: yes, a DVD is included in the package. Taken from a well-worn and watermarked print (film historians didn’t see fit to preserve it; watch and you’ll understand why), The Minx DVD has production values closer to what one would expect from a low-budget TV crime drama of the era. And as for its X rating, The Minx is far less explicit than what you might see on most any Netflix or Amazon series in 2018.

Tags:modern harmonic, the cyrkle, the minx