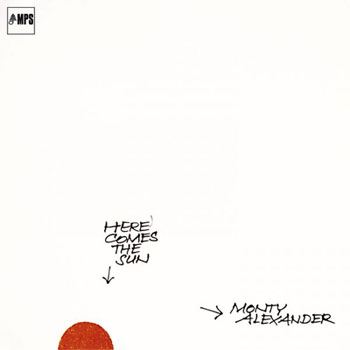 Monty Alexander – Here Comes the Sun (MPS)
Jamaican pianist Alexander has a bright, flowing and lyrical approach to his instrument. Originally released in 1971, Here Comes the Sun was Alexander’s sixth album. Working with three other musicians (bass, drums and percussion), the pianist is at the center of the arrangements on all seven of the album’s tracks. His style often sounds like it’s the result of overdubs; his left hand plays rhythm, as expected, but his right hand is so busy that it sounds like two hands in and of itself. But yet the approach never feels busy. There’s a lively and exuberant to Alexander’s playing that can leave the listener nearly breathless. He and his sidemen sound as if they’re having the time of their lives here; the opening cut “Montevideo” is quite uptempo, but Here Comes the Sun explores a variety of textures; you’re not likely to mistake any one of these tunes for another; such is the level of originality on display here. Be warned, however, that the titular Beatles classic is transformed beyond recognition. MPS does its by now expected top-flight job of repackaging and reissuing another timeless classic from nearly a half century ago. 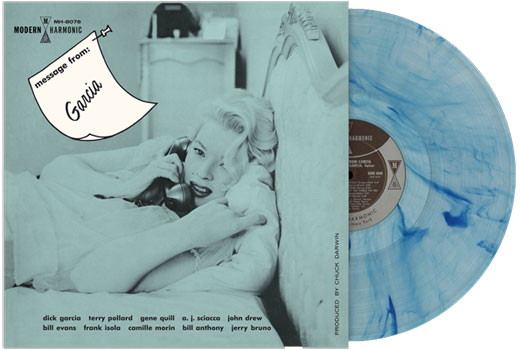 Richie “Dick” Garcia – A Message from Garcia (Modern Harmonic)
Though he doesn’t receive prominent billing on this 1956 album from jazz guitarist Dick Garcia, pianist Bill Evans is all over this album. Garcia is out front, but it’s Evans’ crystalline and meditative piano that holds things together. The band explores a variety of tempos and textures, but at its heart, A Message From Garcia is fairly consistent in its musical approach: the guitarist plays single-note melodic runs while the band provides subtle support. Garcia does engage in the occasional musical dialogue with Evans on cuts like “Ev’ry Night About This Time,” but there’s little doubt whose show this is. When he does take the spotlight, Bill Evans sounds as if he’s enjoying himself. The Modern Harmonic reissue of this relative rarity features top-notch sleeve reproduction and colored vinyl. 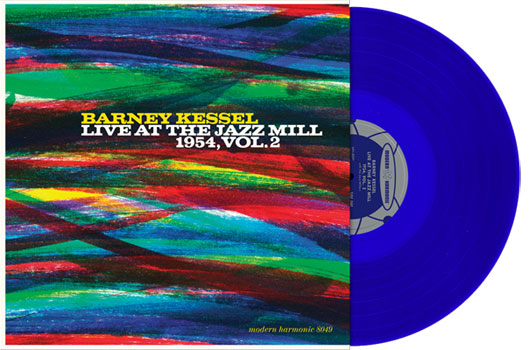 Barney Kessel – Live at the Jazz Mill 1954, Vol. 2 (Modern Harmonic)
Acclaimed jazz guitarist Barney Kessel only began his career as a band leader around 1953. By that time he had made quite a name for himself thanks to his work on recordings featuring Billie Holiday, Benny Carter and others. And he’d continue to provide supple six-string support to some of the biggest names in jazz and pop, including Sonny Rollins, Sam Cooke and Chet Baker. Those who don’t know better could easily mistake Live at the Jazz Mill 1954, Vol. 2 for a reissue of a record from years past. In fact it’s not: a young fan taped Kessel (backed by the Jazz Millers), and the tapes were only recently discovered. This second volume (the first was released a couple of years ago) features surprisingly good audio quality. And everything about the package – the cover art, the jacket’s liner notes – is note-perfect. 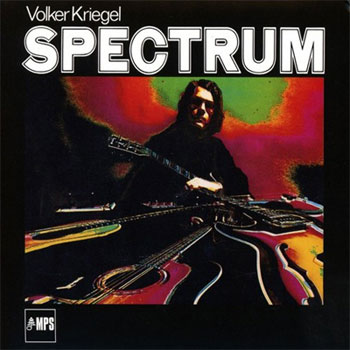 Volker Kriegel – Spectrum (MPS)
I first – and quite belatedly – discovered the work of Volker Kriegel via a 2014 archival release from the now more-or-less defunct SWR/Jazzhaus label. The German guitarist worked in a number of musical idioms including soul jazz and jazz-rock fusion. This 1971 album – Kriegel’s second – is (in places) much closer to rock than anything else I’ve heard from him. With a nasty fuzztone, percussion that may remind some of Low Spark of High Heeled Boys-era Traffic and a kinetic bottom end (featuring acoustic and electric bass as well as cello), Spectrum is a scorcher. John Taylor plays what’s noted as “electra-piano.” The rest of us would know it as a Hohner Pianet or maybe (but probably not) a Fender Rhodes. The opening track “Zoom” finds Kriegel doubling his fuzztone leads on sitar, and it’s not even a little gimmicky. Two years later Kriegel would form a band named after this LP. A tasty treat for those who dig the most accessibly tuneful end of jazz rock, Spectrum is adventurous, too: “More About D” is almost Zappaesque in its weirdness, albeit still rooted in jazz traditions. The album is newly reissued from MPS and is enthusiastically recommended. 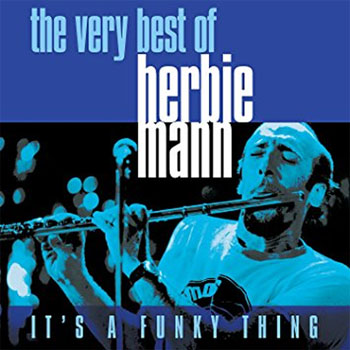 Herbie Mann – It’s a Funky Thing: The Very Best of Herbie Mann (Varese Sarabande)
One could say that Herbie Mann was the Rodney Dangerfield of jazz: he got no respect. Part of that was his own doing; he resolutely refused to be boxed in with regard to what is and is not jazz. His work is wonderfully accessible and irresistibly catchy. It’s also, on occasion, a bit schlocky, and some of his work has a distinct air of bandwagon jumping (or at least musical dilettantism) about it. How else to explain disco outings like “Hijack,” a big hit in the disco era? But for listeners who can put all that baggage aside and simply dig, Herbie Mann’s music is supremely diggable. Turth be known, he was at the forefront of the world music movement, though few will afford him the credit he deserves for it. And anybody hip enough to hire Larry Coryell and Sonny Sharrock is okay by me. This collection – annotated by my pal, the esteemed author and esteemed music journalist Pat Thomas – is a lot of fun. The tracks here are featured in their single edits, most making their first appearance on digital media of any kind. 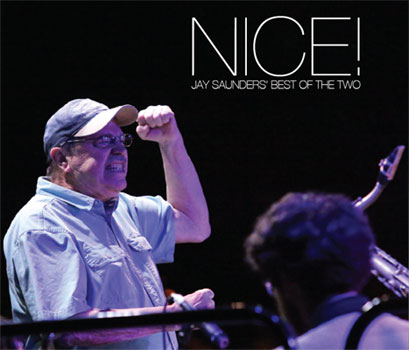 Jay Saunders – Nice!: Jay Saunders Best of the Two (North Texas Jazz)
The University of North Texas has a storied and vibrant Division of Jazz Studies, one that goes back some 70 years. And its North Texas Jazz label has released a sizable catalog of music, featuring instructors, students and alumni. Trumpeter and band leader Jay Saunders recently retired from his position at UNT, where he taught classes and directed bands. This new 2CD collection is subtitled Best of the Two, as in the Two O’Clock Lab. It draws from six earlier releases by the ever-shifting ensemble. The big-band music is a nice mix of standards, ambitious pieces and jazz readings of pop tunes; it’s classic and modern all at once, deliberately all over the map in a way that shows the timeless nature of jazz when it’s done right. “I 8 Da Whole Half Thing” sounds like Lalo Schfrin-style 1970s movie music, and that’s meant in the best possible way. 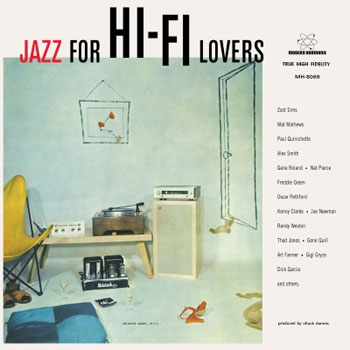 Various Artists – Jazz for Hi-Fi Lovers (Modern Harmonic)
This time capsule in the form of a colored vinyl LP is a true delight. Originally released in 1958 on the Dawn label, Jazz for Hi-Fi Lovers is a various artists collection presented in wonderful hi-fi (read: monaural). Zoot Sims is among the biggest names featured here, and he’s performing Thelonious Monk’s “Bye Ya.” Paul Quinichette provides the opening cut, the aptly named “Start Here.” Paulette Girard’s original liner notes are presented intact, and they too are a kind of trip back in time: they include three lengthy paragraphs under the heading “about the sound and the equipment,” full of info to satisfy the keen high fidelity enthusiast in your mid-century modern household. The cover art is a gas, too. Come for the packaging, and stay for the music.