Calling an event “Holiday Hang” suggests a loose, informal and fun way to spend a December evening. That’s accurate, but organizers of the annual event – now in its sixth year – have set their sights much higher. True, an evening of bluegrass and country featuring a double-bill of Asheville’s Town Mountain and Amanda Anne Platt & the Honeycutters is sure to entertain, but the Holiday Hang also helps feed those in our community who are less fortunate. 2017’s Holiday Hang took place Friday, Dec. 15 at the Orange Peel.

The event began several years ago thanks to Josh Stack, a good friend of the musicians in Town Mountain and Executive Director/Founder of Funding America Through Entertainment. FATE is an Asheville-based nonprofit dedicated to facilitating relationships between corporate entities, affiliated food banks and entertainers.

Town Mountain took part in the first event, then not yet known as Holiday Hang. The band’s banjoist Jesse Langlais notes that over the next couple of years, the annual gala – then held at Isis Music Hall in West Asheville – “kind of transitioned from Josh’s thing into something that Town Mountain spearheaded,” and became a benefit strictly for MANNA Food Bank. This year marks the fourth consecutive year that the event is billed as the Holiday Hang. 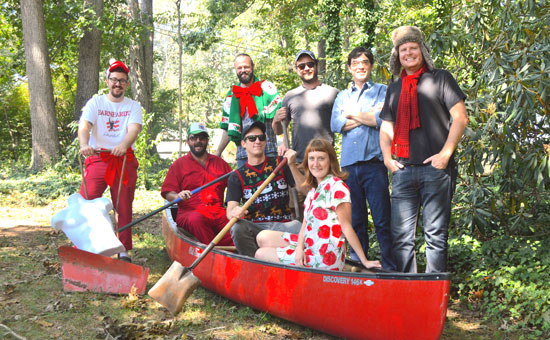 More recently, the musicians of Town Mountain collectively decided to expand the reach of the Holiday Hang concept. Langlais notes that it began as “a strictly local thing, a benefit for MANNA that would bring Asheville bands together to support a local entity and showcase some local talent,” there was the opportunity to do more.

“It made sense to expand it,” Langlais says. “As the event grew each year, we saw the potential for it to be more than it was.” Town Mountain realized that the model could be used to raise awareness for hunger issues while showcasing Asheville bands in front of other audiences. “ We did it last year at a few venues,” he says, “and this year we’ve expanded from four to seven nights.”

Those seven dates – all featuring Town Mountain plus Amanda Anne Platt & the Honeycutters – were scheduled in cities across the region, including Rocky Mount, Va.; South Carolina cities Greer and Charleston; Atlanta, Ga., and three North Carolina cities (Charlotte, Raleigh and Asheville). And the Asheville date moved from Isis to the Orange Peel. “Town Mountain had our first headlining show at the Peel in April, and we did great; we brought in a lot of people,” Langlais says. “So they gave us this date for the Holiday Hang.” The larger venue allows a significantly larger audience to take in a night of music while supporting good works.

Langlais says that 20% of the Asheville show’s proceeds go directly to MANNA Food Bank; in the five years that the event has been supporting MANNA, the Holiday Hang has raised funds to provide 6,000 meals. Other shows on the schedule focus on supporting affiliated food banks in those markets.

New Belgium Brewing Company sponsored the Holiday Hang tour dates. “They’re very community-based,” Langlais says. “They’re always willing to step up to the plate and help sponsor and promote events.” The Colorado-based company (with operations in Asheville) partnered with Town Mountain in 2014, and stayed on in subsequent years. There were four Holiday Hang dates in 2016. “And then this year,” Langlais says, “they were like, ‘Yeah, we wanna stick around for this event. Let’s continue to grow it.’”

Langlais notes that while previous Holiday Hangs have included some informal onstage collaborations between the featured acts, this year may take things to another level. “We’re going to put forth a little more effort in terms of rehearsing some stuff, “ he promises, “really making a good, short finale set” featuring Platt and her band sharing the stage with Town Mountain.

As excited as he is to watch the Holiday Hang grow each year, Langlais doesn’t think its full potential has yet been reached. “You always have the goal in mind to grow the event,” he says. “We would love to see the Orange Peel sell out. It would legitimize the event that much more,” he suggests, “if we could see our hometown base come out to support both the bands and MANNA Food Bank.”

With just two bands on the bill, the Holiday Hang remains a relatively modest extravaganza. But Langlais has ambitious ideas for the future. “Asheville has various events similar to this, and I think there’s room for more,” he says. The entertainment-and-fundraising model is a solid one, he believes. “Just look at Christmas Jam,” he says.

“Asheville is a town that likes to ‘give back,’” Langlais says. “People here are always willing to go out and support a cause that’s greater than themselves. And that’s part of what makes Asheville such a special place.”