The Cult of Old Wood
A violin maker can’t simply drive to the nearest lumber yard for wood. Devereux explains that the raw material – maple for the sides and back, spruce for the top – is milled specifically for violins, and is sourced from Eastern Europe, the foot of the Alps toward Italy.

“Builders get really specific about density and weight; you can measure the way that sound passes through a certain piece of wood,” he says. And then there’s age. “The newest wood you could put on a fiddle has been out of the tree for maybe five to seven years,” Devereux says. “I just bought a back that’s probably been out of the tree for maybe 60, 70 years. And it’s going to sit there; I’m going to wait on that for something special.”

Devereux recounts an in-joke among fiddle makers. “Old violin makers save their best wood until they die. Then the widow gets fifteen phone calls: ‘Oh, I’m so sorry. You wanna sell some wood?’” But like so many issues surrounding fiddle-making, there’s disagreement as to the importance of aged wood. “The most expensive violin in the world right now is a Giuseppe Guarneri that sold for something like $18 million and change,” Devereux says. “And if you look at the wood he used, some of it was two or three years old.”

But people do like their mystique. “I feel like every six months, NPR will do a story on ‘The Secret of the Old Violins,’” Devereux chuckles. “And a lot of all that is b.s.: the way the wood was processed, and if it was cut by a virgin on a night with a full moon.” 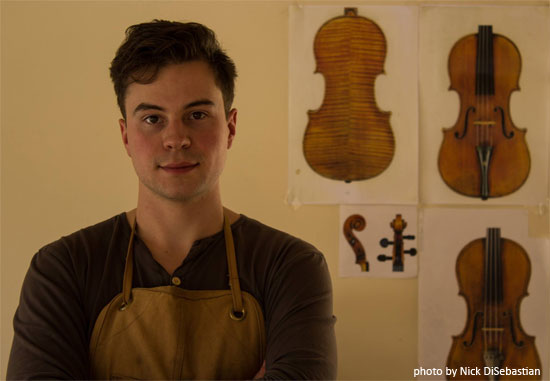 The Big Payoff
It’s difficult to pin Devereux down as to how long it takes to build a fiddle, start-to-finish. He says that the woodworking phase often runs a month or more. But the varnishing stage “has a mind of its own” and could be two weeks, a month, or more. And while in an ideal world, he’d like to be building 10-12 instruments a year, with his Town Mountain performance commitments in 2016 he managed roughly half that number. To date, he says he’s completed and delivered more than 30 instruments.

Whenever possible, Devereux strongly prefers to hand-deliver a finished fiddle to its new owner. But because he’s attracted the attention of musicians across the globe, that’s not always possible. “I’ve got a handful of instruments in Europe now,” he says, “and delivering those is always tricky: customs, transcontinental shipping, import taxes and so on.” In those cases, he tries to hand the violin off to a trusted friend or associate who’s headed that way.

Devereux admits that the practice of presenting a finished instrument is sometimes bittersweet. By that point, he’s already logged quite a bit of time playing and adjusting that fiddle himself. And at the moment, he doesn’t even own one of his own creations. “I keep meaning to build myself something,” he says. In the meantime, he sometimes borrows back one of his violins for special occasions.

After giving away his earliest models, Devereux’s first sale was to a good friend and former Berklee classmate who lives in Victoria, British Columbia. He had been playing what Devereux describes as a “dirtbag instrument; he had no money.” But he wanted one of Devereux’s fiddles, and insisted on paying for it, telling the fiddle maker, “If you’re going to do this, be serious about it.”

“The instrument should act as a conduit from the mind of the player,” Devereux says. And part of his goal as an instrument maker is to make that connection as invisible as possible. “When someone’s playing one of my fiddles,” he offers, “I don’t want them to be thinking about the instrument.” Devereux does that thinking when he’s building.

And for him, the payoff comes when he strings up a finished fiddle. Devereux says that he’s always excited to discover, “when you flip the switch, does the monster comes alive?” He readily admits that he’s a nerd when it comes to instrument making. “I just love reading about it, and trying to go hang out with these old fiddlers and talk to the guys who know more than I do. I really like getting into the nuts and bolts of it.”

Asked what surprises him the most about his work, he has a ready answer. “People keep ordering fiddles!” he says. “I mean, my website’s a disaster, and I’ve done no advertising. It’s miraculous; I have a waiting list.” Because of the time involved, he only builds on commission; there’s no stock room full of fiddles in Jack Devereux’s shop. “I would like eventually to get maybe three, four ahead,” he says.

While he’s receptive to creating instruments that meet the specific desires of his clients, Devereux admits that he really wants to do things his way. Though he insists he’s been fortunate never to find himself in this position, he knows of other fiddle makers who have encountered customers seeking a “magic bullet,” a violin that will magically make them a better player. “Luckily,” he says, “people seem to like the stuff that I like to make.”