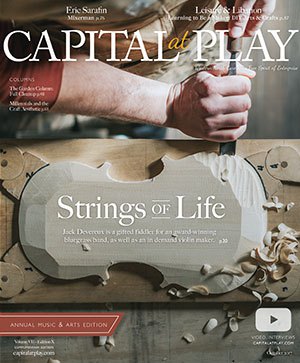 An edited version of this feature appeared previously in Capital at Play. Click here to see that story, along with some stunning photography commissioned especially for the magazine.

I was at a party,” Jack Devereux recalls. “This drunk girl sat on my violin and busted the head off.”

What could have been an unmitigated disaster instead served as the catalyst for Devereux’s own entry into the world of fiddle making.

Nine years ago, Jack Devereux was studying jazz violin at Berklee College of Music in Boston. He had bought a fiddle built by Portland, Maine-based Darol Anger (a founding member of the David Grisman Quintet) and Jonathan Cooper. And when the instrument broke, a series of opportunities led him toward making a lifelong hobby into a profession.

Asheville-born Devereux started playing the fiddle at age 3. “I had always been interested in violins,” he says. “I tinkered with woodworking, building some string instruments as well. As kids, my brother and I were taking apart pawn shop guitars.”

Devereux grew up in a household where that kind of creative exploration was encouraged. “My mom is a very capable craftsperson,” he says. “She does a lot of metalsmithing, and some carpentry.” His father’s an attorney, but still expresses his creativity via writing. “Coming from that environment where craftmaship was something that was talked about, I just grew up thinking about these things.” And he picked up a piece of advice from his grandfather, wisdom that would guide his later pursuits: “Do something you feel you can stand behind … and then charge accordingly.”

While a student at Asheville High, Devereux began an apprenticeship of sorts, working under Chris Abell, who has a shop in Asheville’s Grove Arcade in which he makes high-end flutes. He describes Abell as “a very meticulous and thoughtful craftsman who got me pointed in the right direction.” While he had long been a kind of enthusiast/hobbyist, by young adulthood, Devereux had developed a serious interest in the generations-old fine art of building acoustic instruments.

Maine Events
In the wake of that party mishap, Devereux took the broken instrument back to one of its original builders. “I became buddies with Jonathan Cooper in the process,” he says. “We’re into the same kind of music; Jon likes old-time music and bluegrass, even though he’s building these really expensive instruments for classical violinists.”

Over the winter break of his junior year at Berklee, Devereux started learning from and working alongside Cooper. Once classes resumed, Devereux would return to Portland when he could, on weekends and breaks. “I was working and hanging with Jon,” he says, “just thinking it was something fun; I wasn’t thinking about it too seriously.” In that period, Devereux built his first few violins. But because he didn’t consider the early fruit of his labors as high-end instruments, he simply gave them away to friends.

Once Devereux graduated, he relocated to Nashville, but didn’t spend much time there. Instead he hit the road as a sideman in what he describes as an “Americana/folkie band; just good folks doing good music.” But he quickly discovered that the life of a touring musician wasn’t for him. “I was somewhere in Ohio, and realized that I was totally miserable,” he recalls. He expressed that frustration during a phone call with his friend Cooper. “He had toured at some point, so he understood,” Devereux says. “So after we commiserated, he said, ‘Just come up here and work for me.’”

Devereux made the move from Nashville to Portland in November 2012. “Not the time you want to move to Maine,” he says with a chuckle. He would remain in Portland for more than three years, much of which he says was spent “puttering around Coop’s shop. I came in not knowing too much about anything.”

In the United States, there is a short list of well-known and respected schools teaching the art of violin making. Devereux characterizes those as “a trade school kind of thing; people pay a bunch of money to go to school.” He sees his own tutelage as similar yet ultimately unique. “It was very one-on-one,” he says. “Jonathan Cooper is very established and well respected in the American violin-making scene.”

Devereux worked hard and learned as much as he could. “For the first year or two, I’m sure I was just in the way,” he says with a self-effacing laugh. “But it got to the point where I was doing rough work on some of Jonathan’s instruments, and then building some of my own.”

He says that violin-making was definitely a left turn from what he thought he would be doing. And what was that? “I don’t know,” he admits. “I was nineteen!” All he knew was that he wanted to get better at this thing he was interested in. “That was the whole motivation,” he says. “I’m still in the early stages of making a career out of it, but that’s secondary to ‘How do I get as good at it as I can?’”

He certainly got better working with Cooper. But Devereux was cold in Maine, and so in early 2016 he returned south. The original plan was to head back to Nashville, but then he landed a gig playing fiddle with bluegrass band Town Mountain, so he ended up back in Western North Carolina.

At the time of our conversation, Devereux is between residences, having temporarily moved his shop into an outbuilding in the back yard of his parents’ home. “It’s funny to be back here,” he says, “because this is where some of my first experiments happened, tinkering with guitars and stuff.”

Devereux’s family has deep roots in the region; his mom grew up just north of Asheville, and both his parents’ families go back several generations in Buncombe County. On the grounds of the Devereux family home sits one of the original city trolleys from Asheville’s electric streetcar network, circa 1886-1934. “I don’t know how it came to be here,” Devereux shrugs. “It was there when my folks bought the house.” Today it serves as the family’s garden shed.