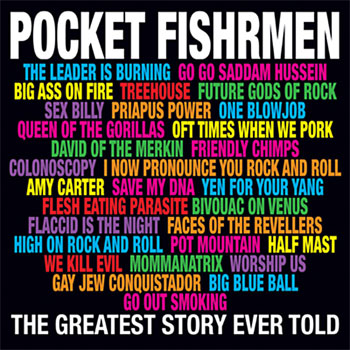 Wow; here’s a weird one. Imagine, if you will, that Dead Kennedys were a comedy band. One from Austin, Texas. Now imagine that they stayed together for three decades, making bratty songs with provocative titles (“Amy Carter,” “Mommanatrix,” “”Flaccid is the Night,” “Priapus Power,” “Go Go Saddam Hussein” … you get the idea.

Now imagine that they crafted a sort of greatest-not-hits collection and gave it an over the top title. Imagine, too, that said album (featuring re-recorded versions of the band’s “classics”) includes a vinyl LP and a CD, with different songs on each (and a digital version that has even more tunes). Everything about Pocket Fishrmen’s music is design to offend and amuse in equal parts (ok, perhaps not equal), and at this they succeed quite well.

The songs are played at speed metal pace, and occasionally suggest punk you’ve heard before (The Damned’s “New Rose”) and punk you probably haven’t heard (“I Cannot Be a Nun” by immortal Atlanta punkers the Restraints), and the half-shouted, half-sung lyrics are a hoot.

Fourteen songs (on the LP) is a lot of Pocket Fishrmen. Sixteen (on the CD) is starting to push it. And thirty (the digital version) is too damn many by far. But excess is what this music is all about. Sure, it’s dopey, but it’s fun in its own way. One suspects the band is even more over-the-top live onstage.