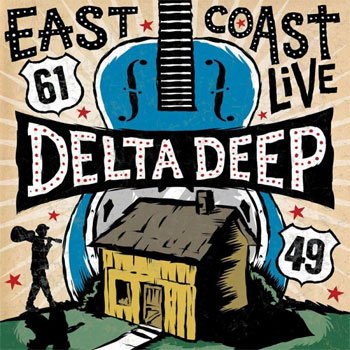 “Supergroup” is a term that gets bandied about so wantonly that it has become nearly meaningless. To their credit, the members of Delta Deep don’t bill themselves as one. But it’s worth noting the band’s pedigree: Def Leppard’s Phil Collen leads the group, which also features players from Stone Temple Pilots and India.Arie’s backing band. But as the name suggests, Delta Deep is about something very specific: “extreme blues.”

Imagine the musical sensibility to early Led Zeppelin, applied to barroom blues, and with a powerhouse female vocalist in Debbi Blackwell-Cook. She, er, cooks while the band stomps in energetic, muscular support. The band excels in cranked-up readings of tunes made famous by others (“Whole Lotta Love” by you-know-who,” Judy Clay an William Bell’s “Private Number”).

And as the inclusion of the latter classic suggests, Delta Deep isn’t a slavish, rote blues project. The band’s sound freely folds in strong elements of rock and soul, creating a tidy showcase of high-energy American styles (yes, Collen is from England, but the Atlantic Ocean never got in the way of British guitarists’ deep love and appreciation for U.S. blues.

This is very much the sort of music that too often loses it power on record; after a self-titled 2015 album, Delta Deep has wholly circumvented that problem this time around by recording this solid collection of songs live in front of an appreciative audience.

Clearly Phil Collen is something of a workaholic; Delta Deep is but one of his several projects outside Def Leppard; he’s also part of the 2018 G3 tour with host Joe Satriani and John Petrucci. And while G3 is a shredding showcase, it’s clear that Delta Deep is designed at least in part to scratch Collen’s blues itch.