Album Review: Andrew Reed – If All the World Were Right 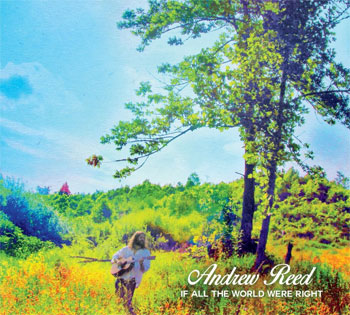 For many people, Asheville, North Carolina is and intentional destination. Set aside for the moment those retirees who settle here for their golden years. For young and middle-aged adults, it’s a city to which they are drawn. People move to Asheville in hope of effecting a life change. It’s wholly unlike larger nearby cities such as Charlotte or Atlanta; for the most part, people move there following job opportunities, as part of a career path.

Asheville’s different. And as such it attracts those of a “seeker” bent. Andrew Reed is such an individual. His latest album, If All the World Were Right is a departure from his progressive and space-rock endeavors with acts like Space Apache. With an ambience that straddles the space between folk-rockers America, the literature troubadour style of mid 1960s Bob Dylan and breezy midtempo FM Rock, Reed serves up a dose of lyrical optimism.

In a time when protest music is (quite understandably) on the rise, Andrew Reed displays a sunny disposition. It’s not a head-in-the-sand, everything’s-fine point of view; it’s more of an everything-will-be-okay-eventually stance. His lyrics don’t suggest that everything will right itself automatically, either; titles like “Putting Things in Order” make plain that Reed knows there’s work to be done.

The instrumentation is sharp and clear, with Reed’s guitar and slightly raspy voice out front, but the additional instrumental touches – sax, trombone, viola, cello, trumpet and bits of electronic keyboard – are seamlessly incorporated. And Reed’s work in more rock-leaning styles informs his approach mellower tunes here, all to the good.

Listeners who find themselves moved by If All the World Were Right will be pleased to know there’s much more in a similar style where that came from; Reed has released four previous albums, the oldest dating back more than decade.