What I’m trying to do as I get older is to try to make my life more enjoyable, and less stressful, and to be able to do more and more what I want to do, rather than what I have to do or am made to do. And so I just thought, “You know what? I don’t think this film thing is for me at all, actually,” I don’t want to be directed. I don’t want to be told what I have to write or to change things that I think are perfectly suitable, and I certainly don’t want to be in the middle of an argument where one producer is arguing with another producer, and I’m kind of the person that everyone’s blaming. I think I would struggle a little bit, and I think I would find it a pressure and a worry. And that’s the very thing I’m trying to get away from. You know, I want my life to get easier, not harder.

The other thing is, I really love making albums. And I love touring. I’m very aware that I’m getting older; the end of my career is probably a lot closer than the beginning. So, I think that my feelings about getting into film music were almost like a knee-jerk reaction of, “I need to find something else that I can move into, because this is going to end fairly soon.”

But I’ve thought about it a lot – really, really deeply – since coming here, and I just don’t think that [soundtrack work] is the right thing for me. I want to do as much as I can to keep the career that I have going for as long as possible. I don’t want to stop touring; I want to keep on doing that – so long as I am able – for many, many years yet. And I don’t want to stop making my own albums. I don’t want this transition from what I’m doing into film music. I just decided it’s not for me.

Your two most recent albums have similar titles, both with a subtitle. Is there a connection between them?

There isn’t any at all, apart from the way that I’ve learned titling. I wish there was! I wish I had a really clever answer there: “Oh, this is the connection.” But no, there really isn’t one. The subtitle [“Songs from a Broken World”] was just a glib answer to a vague question that someone in my family posed.

So they’re not parts One and Two of a trilogy?

[Laughs] no, no, no. But who knows? Who knows what’s coming next?

Do you get a sense that at your live shows that there’s a subset of people who show up expecting two hours of variations on “Cars”?

I think most people know what they’re in for now. You know, I’ve been doing this for a long time, and it’s been very, very clear for a very long time that I’m not a nostalgia act. 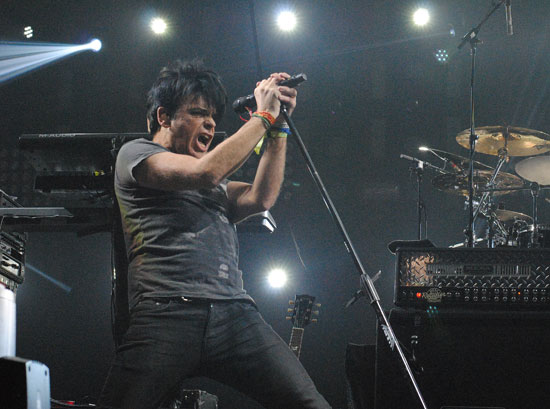 Every once in awhile I will go out and play one of the old albums; I’m very true to it. That’s something that I realized over the years is a fairly important thing to do. There are a number of people that support me now that prefer that early period. And I won’t say, “No, I’m not having anything to do with that.”

The way I’ve ended up approaching this is that on this tour, about one-third of the set will come from the early years. You know, songs like “Cars,” obviously. And the rest of it I’m very much focusing on the new album or more recent stuff.

So, the thrust of it is very much where I am now, with as small a nod back as I can get away with to what came before. I do understand that for some people that’s a bit disappointing, but I think for the majority it’s great, and I think it works really well. That’s why I’m still around.

I used to get a great deal of problems whenever I toured. People would be complaining, “Oh, you don’t do the old stuff. You didn’t do this song, you didn’t do that song.” And I would be, “Well, here’s where I am now; here’s what I want to be doing now.” But I think there’s a degree of arrogance if you totally ignore what the people who support you want. Savage is much better than anything I’ve done over 35 years. So, clearly there are new people coming here. You have to try to find a way of structuring what you do to satisfy everybody without compromising what you actually want to do yourself, of course.

Both albums have earned you your best critical notices – and biggest sales – in years. Do you think that popular taste has just come around to line up with what you’re doing?

It might be that; I’m not sure. With Savage, I think that my songwriting has definitely improved … not that there was anything wrong with it before that. But the melodies and the choruses that I’m coming up with now are just a bit stronger than they were before. I think Ade Fenton, who’s producing the records, has risen his game to a new level. So, I think both of us are at a very, very high point in our careers at the moment, and luckily, we’re working together at a time when we’re both probably doing the best work that we’ve done. That definitely helps.

I’m probably writing the best songs now, or as good as anything I’ve ever written before. And that’s a pretty good position to be in when you’ve made 20 or 21 albums, or whatever it is.