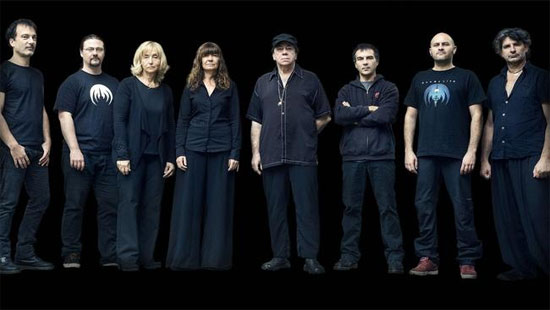 Well, this could be both ways because usually Magma always plays on stage before recording. Almost all Magma albums were recorded a long time after we tried it onstage in many different ways with many different changes. But then after we record it, because in the studio…

You know, Christian is very tiring for people, because he has an idea every five minutes. So, even though it’s complete and we are going in the studio because it’s complete and we are going to record it the way it is, it’s not true! Because he’s going to change something else at the end. And then after we have recorded it and we play it again on stage, we can change things that we did onstage for months, or maybe even years, depending on what we changed in the studio to do the recording, you see. So it’s endless.

How has the music of Carl Orff influenced you?

In fact, when I started to compose Mëkanïk Dëstruktïw Kömmandöh, I had never listened before to Carl Orff. Magma’s pianist of that time, which was Faton Cahen, told me, “That sounds a lot like a composer called Carl Orff,” and he had me to listen to Carl Orff for the first time. And when I listened to that, I said, “Oh, this is the ideal orchestra for Magma; this kind of orchestra would be really nice to have.” But because I never listened to Carl Orff before that, his music did not have a real influence on those compositions.

Magma does not sound like anyone else. There are occasional bits — maybe a few notes – that lead one to think, “Oh, that’s a little bit like Frank Zappa,” but then it’s gone.

In fact I have never really got into King Crimson music. You know, I barely listened to all those bands from the same era. I was really, really much more listening to jazz all the time and especially Coltrane. Sometimes, someone would come to me and say, “You should listen to this or that.” But I always learned a lot more from jazz music than from any other kind of music, and especially more than — what’s it called? — prog rock. And I think that Magma is not a prog rock group at all!

Do you feel a kinship with jazz artists who were working in the late ’60s and ’70s?

Yes. I was listening to jazz musicians from that time. Like, for example, Tony Williams. His drumming was very inspiring. Also, for example, Weather Report. In fact, I was working on a composition at that time, and I listened to that album [1974’s Mysterious Traveller] from Weather Report with the song “Nubian Sundance.” It was very much like what I was working on that time, and so I stopped to work on that composition, because I thought that it was well done by people from Weather Report. Afterwards, Weather Report became a bit different, but in the beginning, we were feeling close to those people, of course.

My wish is to always surprise the audience, but also surprise myself when I am composing. And there wasn’t anymore surprise when I listened to this Weather Report album. So, that’s why I changed completely and forgot about what I was working on at that time. And [today] the idea is still that I want to surprise myself even before surprising the audience.

The very earliest Magma albums are sometimes described by critics as having a musical connection to jazz rock fusion. Are you comfortable with that characterization?

I don’t agree with the label jazz rock fusion, because we don’t want to have any labels put on Magma’s music. When I meet people and they say, “Well, what do you do?” I say, “I’m in a band called Magma,” and blah blah. “And what kind of music?” I use only one word: unclassifiable. Yeah, that’s why we made the word zeuhl for that: to avoid any other label.

Other artists have made music in the zeuhl style. Are you pleased that this happened, or do you see the movement as others merely copying on the foundation that you’ve created?

Well, of course, we’re pleased because it became a new genre, and you see it is even in specialized shops. You have jazz, you have pop, and then you have zeuhl. In this moment, you can find very good bands that can surprise as well, and some others who are just copying. And this is normal. I mean, you start by copying before finding your own way to do it, but it’s a very good thing, of course, to be able to say, “Okay, I’m doing my own kind of music, and I’m not the only one to do it.” So I think it’s a very good thing.

Magma had a logo a long time before doing so was a common thing for bands to do. How important was and is the concept of “branding” as far as Magma is concerned?

We released a DVD earlier this year. We put the logo on the cover, but we didn’t put the name Magma on the cover. We think that now we can only [use] the logo and people know what it’s about. And when they don’t know, they ask, “Oh, what is this logo?” And they look into it. And we think it’s very important to stick to a kind of logo when you are happy with it. Even outside of music, brands like Coca Cola, for example, or Volkswagen, they never change the first logo they [created].