Pylon might not have achieved the fame and notoriety of fellow Athens-based bands like R.E.M. and the B-52’s, but the funky new wave group was a beloved part of the college town’s arts and music scene. After its initial run (1978-83), the band would reunite for awhile at the end of the decade, and then again in the mid 2000s, but the 2009 death of founding guitarist Randall Bewley ended Pylon for good.

Yet that wasn’t the end of the story. In 2014, The Art Rocks Athens Foundation – an organization whose mission is to unearth and catalog and showcase the art that came up around the scene in Athens – wanted some music for its annual event. Executive committee member Jason NeSmith reached out to Pylon vocalist Vanessa Briscoe Hay, asking if she was interested in performing. 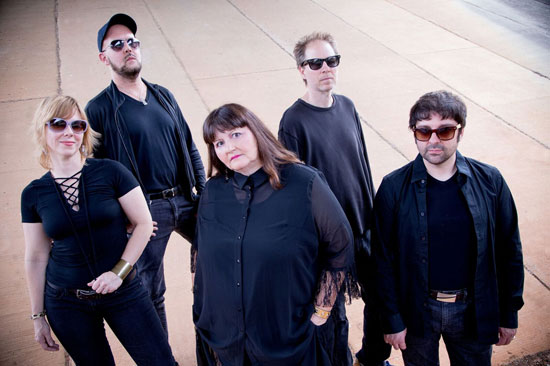 “I had already been playing with Vanessa in a band called Supercluster,” NeSmith says, “and because she’s so integral to the scene – then and now – it would have been wrong if I didn’t offer her a place to make some kind of music.” Hay agreed. “Showing the connection between the Athens art and music scenes between ’75 and ’85, it would be appropriate to play [the music of] Pylon,” she says.

But the group she put together – which includes NeSmith plus Kay Stanton, Joe Rowe and Damon Denton – wouldn’t be called Pylon. Honoring the memory of Bewley meant that using the old band’s name “wouldn’t have been right or fair,” Hay says. Besides, she explains, “we were having to totally re-learn all this material, so we jokingly called ourselves the Pylon Historical Reenactment Society.”

After what was initially planned as a one-off gig, the band dropped the “Historical” from its name. In July 2015, PRS played at a party celebrating the release of Pylon Live, an archival live album documenting a high-energy 1983 set. The party show went so well that indie band Dressy Bessy approached Hay and her band mates and invited them to do a run of live dates together.

“We had so much fun doing those shows that we’ve intermittently booked some more,” Hay says. PRS had traveled as far as Los Angeles, Detroit and Chicago. But the group isn’t likely to mount a full tour anytime soon. “Two members have full time jobs,” Hay says. “And almost everybody is involved in another project.”

Pylon’s music still sounds fresh in 2017, and not as dated as many other bands of its era. “It’s quality, startlingly new music even today,” NeSMith says. “That’s why DFA Records re-released their records.” PRS does a superb job of conjuring the spirit of prime-era Pylon, and does it without slavishly copying the original music. “I’m using Randy’s tunings, and we pay homage respectfully to that sound.” NeSmith says. “But we’re different people, and we also have our own idiosyncrasies.”

Hay agrees. “If you’re going to do it,” she says, “you might as well have fun with it, right?”