A saxophonist employing the circular breathing method is impressive, but not as remarkable as it once was. At the top of the creative scale, jazz legend Rahsaan Roland Kirk used the technique; at the other end of the spectrum, Kenny G made it into the Guinness Book for playing the longest-held note on the saxophone (nearly five minutes). Clearly, what matters is what one does with the technique.

Chicago-born (and Brooklyn-based) Jonah Parzen-Johnson does something special. He creates hypnotic soundscapes with his baritone saxophone, but he adds another element to his sound. Working with analog synthesizers, Parzen-Johnson manipulates those electronics with his feet while playing the sax. The result is lush, deeply textured music. 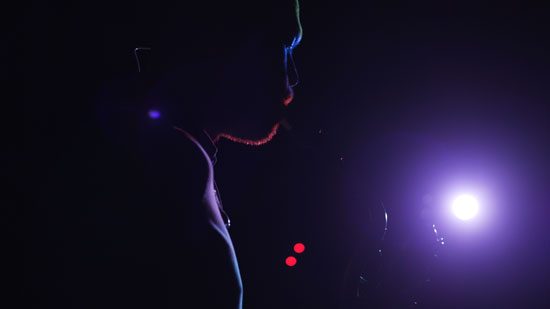 The saxophonist first conceived of combining synth and sax during a visit to the Asheville, N.C. factory where Moog synthesizers are hand-built. “I was really struck by the immediate physical quality of the instruments that they were making,” says Parzen-Johnson. “That got me interested: ‘is there is such a thing as electronic music that’s not computer music?’” For him, the answer was a definite yes.

To his delight, Parzen-Johnson discovered that the physical limitations of analog synthesizers “create the opportunity to make more musical statements, things that sound less like computers,” he says. He believes his music sounds “more like a human being interacting with electronics.” He’s careful not to let technology overwhelm him. “I want to combine to create a cohesive sound and message,” he says. “I like to get on stage and say something clear and complete musically, creatively and interactively with the audience.”

The gear setup that Parzen-Johnson uses preserves the unique qualities of the saxophone. “The idea behind my setup is to directly interact with the sax,” he says, “but not alter its tone.” He explains it another way: “I’m playing the saxophone, and the saxophone is playing the synthesizer. Instead of feeling like a duet, it sounds like two instruments that have come together to play as one unit.”

Parzen-Johnson has released four albums under his own name. Describing his sound as “lo-fi experimental folk,” his latest one-man release is 2017’s I Try to Remember Where I Come From. As much as he enjoys playing with other musicians – like his band mates in Brookyn’s Afrobeat ensemble Zongo Junction – he says there’s no denying the advantages of playing and touring on his own.

“The green room is a lot emptier when you’re the only musician in the band,” he points out. “That means I spend a lot of time in the audience, talking to people and getting to know folks in different parts of the country,” he says. “So every time I go on tour it’s also an informational tour.” And Parzen-Johnson says there’s another advantage to being a solo act. “It’s really easy to schedule a rehearsal.”