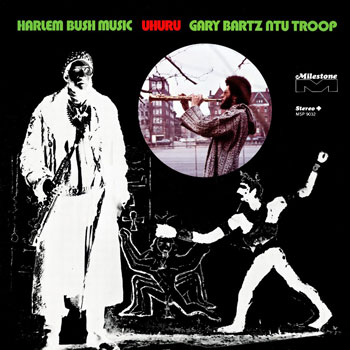 The 1970s were a fascinating time in jazz. Fusion was establishing its footing, and a wide variety of artists had committed themselves to exploring the outer boundaries of the jazz form. One of the directions pursued was the incorporation of African rhythms and textures. Of course in and of itself, that was hardly a new idea: Cannonball Adderley’s African Waltz had explicitly followed such a direction way back in 1961. and it goes without saying that jazz was built upon an African foundation.

When saxophonist Gary Bartz recorded the second of his Harlem Bush Music albums – 1971’s Uhuru, credited to Bartz’s Ntu Troop – he chose to work with some of the best sidemen he could find. That short list included bassist Ron Carter. For this record, he built the collection around an 18-minute blues with vocal called “Blue (A Folk Tale).” The piece has the feel of an opening theme from a play or other stage presentation. The tune initially features only Carter’s bass plus Bartz on vocal and piano. He’s playing in a style quite reminiscent of Thelonious Monk. Three minutes in, Bartz enters on sax, joined by percussion stabs from Nat Bettis and drums by Harold White. Much of the next few minutes features little other than Bartz’s screaming, squawking and sometimes melodic saxophone, punctuated by vocal whoops and hollers. It’s exciting stuff.

Through overdubbing, Bartz adds multiple vocal lines as the band kicks into a truly funky workout; in turns it’s groove-filled, exploratory, bluesy and near ambient; Bartz seems intent on traveling to several destinations within the blues idiom within the framework of a single performance.

The albums’ remaining four tracks are all much shorter, but no less intriguing. “Uhuru Sasa” features Carter and Bartz often playing the same melodic line; but just when the listener licks into that groove, they diverge. The vocals – especially the chorus – dig into the African flavors.

“Vietcong” features Juni Booth on bass instead of Carter. The track fades in, suggesting that what we hear on record is merely part of a much longer piece. An alluring sax melody is supported by a slinky blues foundation. Against the backdrop of the then-current conflict in Southeast Asia, a tale of a Vietcong warrior “ fight[ing] for his homeland” would have been controversial stuff indeed. Regardless, it’s a swinging tune.

“Celestial Blues” fad in as well. The rhythm section of Carter and White turns out a hypnotic patter, atop which Bartz sings and solos on his sax. His soloing becomes wilder and unrestrained as the performance unfolds. Carter sounds like he’s having fun even while adhering to the limits imposed by function as the song’s anchor.

“The Planets” is not a reading of Gustav Holst’s classical work. Instead it’s a relatively spare number that lies halfway between cocktail jazz (thanks to the wood block percussion) and the sort of thing Sun Ra and His Arkestra might have done. The song largely becomes untethered in its midsection, allowing the players to head off in whatever direction they choose. More than anything else on Uhuru, “The Planets” feels like an improvisation.

A new 180-gram vinyl reissue of the album reproduces the music and the packaging in all its glory. Harlem Bush Music: Uhuru was Bartz’s fifth album as band leader. He would go on to release more than two dozen more albums, and today at age 76 he continues to perform. He also teaches at the Oberlin Conservatory of Music.